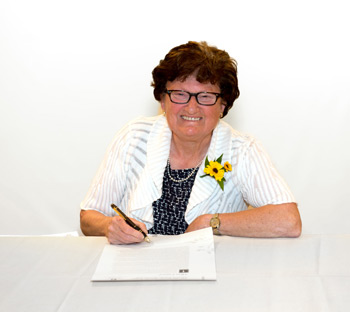 Marilyn Raber signs her story for the Endowment Book of Life 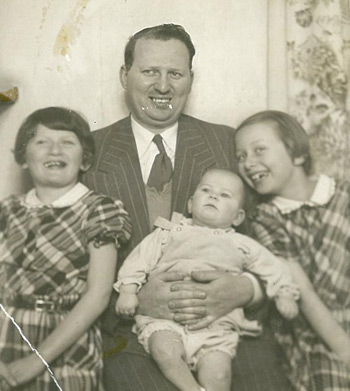 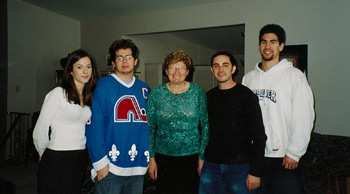 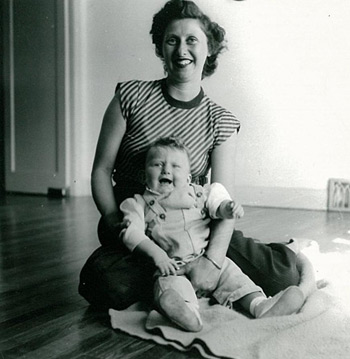 Marilyn and her mother Sadie Raber 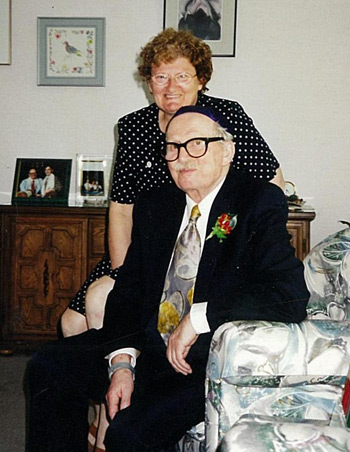 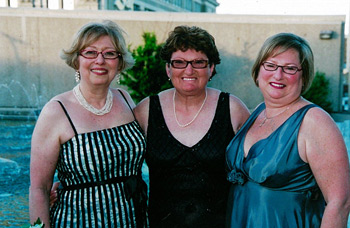 Marilyn and her two sisters: L to R: Sharon Allentuck and Elaine Goldstine 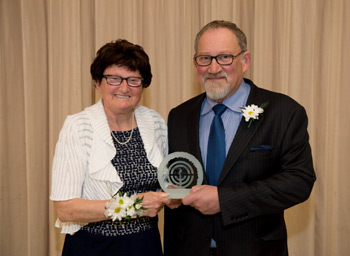 For Marilyn Raber, life is all about her family and community service. The more she can help, the better. The more she can serve, the happier she is. These are values she comes by honestly — values she inherited from her parents, the late Ben and Sadie Raber (née Pinsk).

Ben was born in 1920 in Poland and, at the tender age of six months, came to Canada with two brothers and their mother, Leiba (née Shpin). Ben's father, Simcha, arrived a little later and Simcha and Leiba had another child, a daughter. Marilyn's mother, Sadie, was born in Regina to Sam and Ida Pinsk (née Greenspan), who originally came from Odessa, via New York. Sadie was one of seven children.

Ben was stationed in Mossbank, Saskatchewan, with the ferry squadron during World War II and met Sadie on a weekend visit to the "big city". They married in Regina in 1944. After the war, Ben went to design school in New York while Sadie stayed in Regina. They then moved to Winnipeg in 1946 where Ben worked for a number of different clothing manufacturers before establishing Raber Togs in 1965.

Marilyn was born in 1948 in Winnipeg, the middle child between Sharon (Allentuck) and Elaine (Goldstine). The first family home was on Lansdowne and the second on Oak. Marilyn recalls lively neighbourhoods full of children. She loved to ride her bike around the neighbourhood and is still an occasional rider. She reminisces lovingly about family car trips to California, Detroit Lakes, Clear Lake, and eventually a family cottage.

Marilyn attended Inkster and Isaac Brock Schools and then went to R.B. Russell for high school where she studied cooking. She also went to Hebrew night school at Herzlia. She had some challenges along the way, including a hearing problem, but her parents treated her the same way as they did her sisters, and expected her to be independent and resilient. She was then, and she is now.

After high school, Marilyn worked for a number of years in the family business, Raber Togs. She then moved on to Kromar Printing where she worked in shipping and production. Today she works part-time at Schmoozer's Café, the restaurant at the Asper Jewish Community Campus.

As a volunteer, Marilyn is leaving a tremendous mark on her Jewish community. Over the years she has logged hundreds and hundreds of hours as a volunteer with the Jewish Federation of Winnipeg, and has become a valued member of the office staff as she takes care of filing, mailings, and other duties. She was recognized publicly for her service to the Federation in 2013 with a Shem Tov Award. Marilyn is a modest and soft-spoken woman, but is quite proud of her award and hopes her volunteerism sets an example for others.

Before joining the team at the Federation, she was an active volunteer with National Council of Jewish Women, helping out at programs and at the former Opportunity Store.

Marilyn humbly says that she volunteers so much because "it gives me something to do," but she also confesses that she has a hard time saying "no." She is proud to give to her community.

Marilyn holds dear to her family relationships. She is very close with her sisters, Sharon and Elaine, and feels very connected to her three nephews, one niece, two great nieces, and her many cousins. "I love my family," she says with a warm smile.

Over the years, Marilyn has also enjoyed a great deal of travel. She was part of a 2006 trip to Israel with Shaarey Zedek, and has taken bus tours to Banff, California, Ottawa, and Nova Scotia.

When not working or volunteering, Marilyn enjoys coming to the Rady JCC, watching hockey and baseball games, or simply walking outside (she loves the outdoors!). She is also a very frequent attendee at Shaarey Zedek, where her father served as Shammes in his retirement. She rarely misses a Shabbat morning or weeknight service and is proud to be part of the minyan.

Marilyn is proud to have her story in the Endowment Book of Life, and proud of the community she calls home. "I want to set an example for my nephews and nieces," says Marilyn. "We are all part of the community's story."