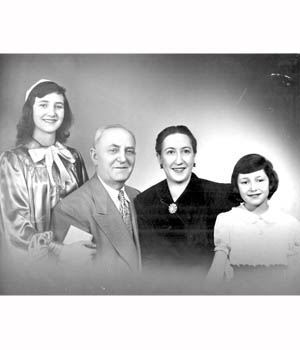 Sid and Marilyn Trepel and Family

My father was born in Romania in 1890 (deceased 1962). He came to Minneapolis where there was some family. He later moved to Duluth, Minnesota, where he sold newspapers, and around 1905 he moved to Winnipeg, where he had an older brother. In 1910, with a loan of $500.00 he opened his own jewellery store, Ben Moss Jewellers, on Main Street.

Both my parents were actively involved in the Shaarey Zedek on Dagmar Street and continued their community involvement until their health failed. They were married for 25 wonderful years and have left a lasting impression on their children: "A good name is rather to be chosen than riches".

I was born in Winnipeg at the Misericordia Hospital in 1939. I have one younger sister, Beverley Moss (who is still actively involved in Ben Moss Jewellers — Polo Park Store.) I attended Queenston, Robert H. Smith and Kelvin High School, where I graduated from at age 16. I was very involved in many sports, B.B.G. Shaarey Zedek Youth Group, and the Y.M.H.A. I was confirmed at the Shaarey Zedek and had a Bat Mitzvah the second year that Bat Mitzvahs became popular (1953-54).

I started the University of Manitoba at age 16, in 1955, where I met my true love and soul mate, Sid Trepel. I also attended Teacher's College and taught Grade 1 for a short period.

Sid and I were married in September 1959 and have shared many wonderful experiences through 41 years of marriage. We have 3 terrific children, Louis, Brent (Brenlee) and Sindee (Albert), and four fabulous and precious grandchildren — Skyler and Sierra Trepel, and Emerson and Shayna Wilhelmer. Our family is my most treasured possession and the most important thing in my life. I love to spend time with my husband, children and grandchildren.

I have always been involved in the Jewish Community, whether it be volunteering, canvassing, or donating to the charities, which are very important to me. Our family is fourth generation members of the Shaarey Zedek, where Brent and Louis also had their Bar Mitzvahs. Our children attended Ramah (as well as public and private schools), and I am pleased that some of my children are attending the Gray Academy at the Asper Campus.

I feel very fortunate to be able to call Winnipeg my home and am pleased that our family is in Winnipeg, and involved in our family business, Ben Moss Jewellers, as well as in the Jewish community.