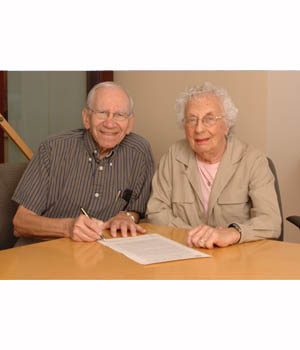 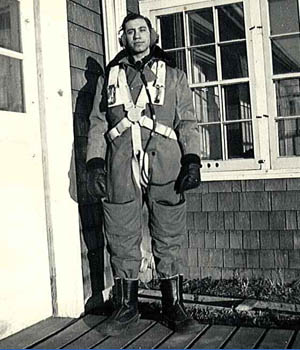 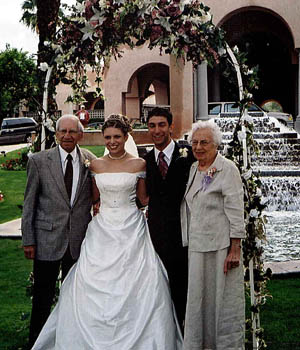 Al and Marian at Michael and Julie-Anne's wedding 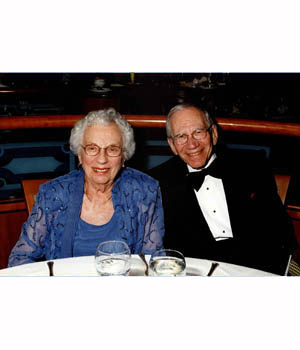 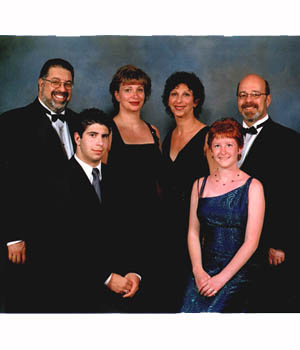 While Al and Marian (Abrams) Zelickson both boast rural Canadian roots, they are very much active urban dwellers, proud of the city of Winnipeg and all it has to offer, and proud of the local Jewish community, its services, organizations and, in particular, its community campus.

Al's father, Louis, was born in Hirsch, Saskatchewan. He worked there as a grain buyer, became a town councilor, and traveled to Winnipeg to marry Annie Ginsberg in 1914. The couple returned to Hirsch, where their oldest son Ralph was born in 1918, then moved to Winnipeg so they could offer their children a Jewish education. Al was born in Winnipeg in 1921.

Settling in the north end, Louis, an accountant by profession, worked for a wholesale grocer. He was a quiet and giving man who helped out many small grocers with acts of kindness, including the delivery of Gunn's Bakery's first barrel of oil. He was so highly regarded by Jew and non-Jew alike that when he died in 1943 at the age of 51, Flora Avenue, between Main and Charles, was closed off for his funeral.

Annie was born in Dvinsk, Russia but educated in London, England. While diminutive in height, she was tall in personality. When she arrived in Winnipeg as a teenager she began working as a forelady at a clothing factory, where, with her hair cut short to make her appear older, her perfect English helped her translate and arbitrate between employer and employees. She was the driving force behind her sons' Jewish education, and very involved in the Talmud Torah Muter Farein. Every year before Yom Tov she had her sons paint the synagogue chairs. While Louis was an accomplished pianist, Annie entertained at Talmud Torah banquets with her beautiful voice — a gift that her son Al inherited.

Al began singing in Cantor Brownstone's Talmud Torah Choir at the age of six. He joined the Shaarey Zedek Synagogue Choir in 1938, where he sang for 55 years. In 1970 he traveled to Israel with the choir to perform at the Zimriyah Song Festival, and was thrilled to act as choir manager. He continues to sing today for special occasions.

When Al finished high school he began working at Dominion Electric for $9 a week. He had always been mechanically inclined and found his work rewarding, particularly as fluorescent lighting was just being introduced. He met Marian when Max, his friend and Marian's younger brother, asked him to fix a lamp at their house. Marian was smitten when she heard Al singing in the attic, Al was intrigued, and the two began dating.

The couple was separated in 1941 when Al joined the Air Force. He served three and a half years as a wireless air gunner, partly on staff at the Canadian Commonwealth Training Plan where he logged a multitude of flying hours. He and Marian married in 1946, and Al, although in need of work, turned down two job offers that required traveling so that he could spend time with his bride. He did accept a third offer, becoming a salesman at Midwest Radio and Furniture Company.

In 1950 Al moved to the provincial government, starting off as a clerk and becoming the Director of Licensing in the Department of Motor Vehicles. In 1968, he was invited by Premier Ed Schreyer to participate in the preliminary designing of Autopac. He retired in 1983 at the age of 62.

By then, Marian had retired from her career with the Unemployment Insurance Commission. She had begun her government career working in the Federal Department of Mobilization/ Veterans Affairs during the war, after taking her mother's advice and turning down a job in Ottawa. Marian left the workforce when she became pregnant in 1948, and returned part time years later to earn money to afford a trip to Israel. Upon retiring in 1978, Marian began volunteering for B'nai B'rith and in the Shaarey Zedek gift shop, which she does still today. When she was younger she also volunteered at the Health Sciences Centre.

Marian and her brother, Max, had been born in Dauphin, moving to Winnipeg with their parents Sara (Davis) and Mitchell Abrams as toddlers. Marian's maternal grandparents, William and Esther, were German immigrants who had been betrothed as children. They wed in Montréal, were storekeepers in Three Rivers, Quebec, and had nine children, of whom Sara was the youngest. They eventually moved to Winnipeg where William ran a store. After completing school, Sara worked in Eaton's binary. When she married Mitchell she moved with him to Dauphin where he worked for a creamery.

Mitchell had been born in Winnipeg, orphaned at a young age, and brought up by his half sister. He was a very outgoing man and had many friends. He died at the age of 59, while Sara, lived to the age of 97.

Marian grew up in a kosher home on Boyd and Powers, and was a good student at William Whyte and Isaac Newton schools. She fondly recalls accompanying her father to baseball games and wrestling matches at the old auditorium. In her youth, like Al, she was a member of Young Judea and the Y. After high school, she worked as a cashier for Odeon Morton's Theatres and attended Success Business College before beginning her government career.

Marian and Al have two daughters. Louise Raber is a Registered Nurse in Winnipeg, married to Lorne Raber and mother to Lindsay. Elaine Gamer is a Marketing Director who resides in Calgary with her husband, Harvey Gamer. They have two sons, Michael, who lives in England, and Daniel, who lives in Calgary. Marian and Al both enjoy a very close relationship with their families, especially their grandchildren.

Marian and Al are pleased to be participating in the Endowment Book of Life program and to have this opportunity to demonstrate their support for the future of the Winnipeg Jewish community.