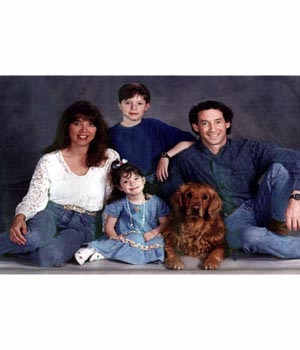 I was born on January 3, 1957 in Winnipeg, Manitoba. While I was growing up in Winnipeg, being Jewish connected me to almost every aspect of my life: school, friends, camp and teen social groups. This connection has enriched my life. Now as the mother of Zak, age 13, and Rachel, age 8, I reflect back on how I was raised and how important my family's influence was in making me the person I am today.

I grew up in a family where being Jewish was very important. My parents and grandparents were very involved in the Jewish community, giving generously of their time and resources to support Israeli and local Jewish causes. Conversations around our dinner table were often about fundraising and Israel. My parents believed in the value of a Jewish education, so I attended Ramah Hebrew School. While we didn't live a particularly "observant" Jewish life, lighting the candles every Shabbat was a ritual in our family, as were all the holiday celebrations.

After graduating from Ramah School, I attended public school for my junior and senior high years. To maintain a Jewish connection I became an active member in BBYO. Most of my camping experiences were at Jewish affiliated camps such as Camp Massad in Winnipeg, Camp Massada in B.C. and Camp Sololim in Ontario. It was very important for me to connect with other Jewish teenagers.

In my early 20's, I attended San Diego State University, where I received a Bachelors Degree in Physical Education and later, the University of Calgary, where I obtained a Certificate in Education.

It was in Calgary that I met my husband, Mitch. After we got married, we moved back to Winnipeg where I worked as an elementary school teacher. Once Zak and Rachel were born I left teaching and became a `stay-at-home' mother. I have always believed in the value of children being raised by their mother on a full-time basis. I feel very fortunate that I have been able to do so.

When our children reached school age, Mitch and I were faced with the difficult decision of where to send Zak and Rachel to school. With many alternatives to choose from, we needed to examine our priorities. We realized that a Jewish education was of fundamental importance to us. So Zak and Rachel attended Ramah Hebrew School and now, the Gray Academy of Jewish Education.

Over the past number of years, we have tried to live a more `traditional' Jewish life. We joined Herzlia Synagogue, where we attend Shabbat services and Jewish holidays. Attending synagogue regularly has been a positive experience for my family.

I try to continue in my parents' and grandparents' footsteps, where I am involved on a volunteer basis with a number of organizations in the Jewish community. I currently do work for the Combined Jewish Appeal, National Council of Jewish Women, Herzlia Synagogue and the Gray Academy of Jewish Education.

I hope my children will grow up to be Jews with strong moral character. We have encouraged them to live their lives in an ethical manner consistent with the teachings of the Torah.

Every day I try to perform as many `mitzvot' as I can. I strive to be a good person and a good Jew. This focus has enriched my life and the life of my family.