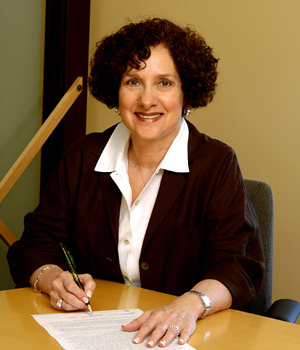 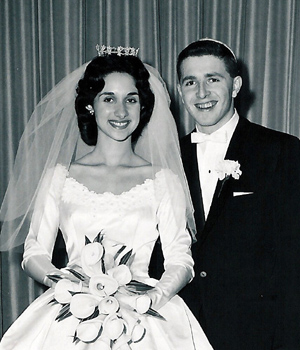 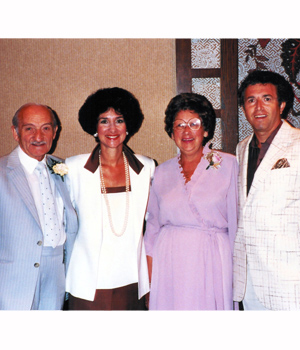 Lou and Marcia with her parents, Louie and Cecile Katz 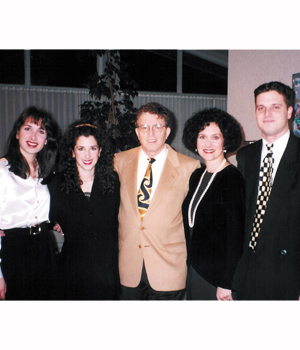 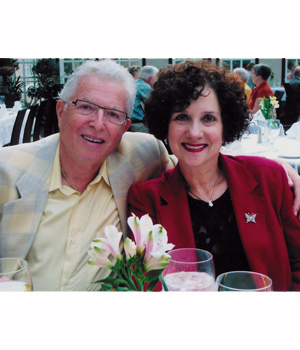 My maternal grandmother, Pauline Cohen was born in Montreal in the late 1800's, the daughter of Bella Nudelman and Harry Cohen, emigrants from Russia. Educated in London, England, my grandmother returned to Montreal with her family at age thirteen. My Bobba Polly met Ben Simovitch in Winnipeg and they were married in 1914.

My maternal grandfather, Ben Simovitch, the son of Dvorah and Aaron Simovitch, had emigrated from Rudnia, Russia in the early 1900's. At the time of their marriage, my Zaida Ben owned a grocery store on Union and Roch in Elmwood, East Kildonan. My mother, Cecile, was born on March 16, 1916. She had two siblings. My grandfather lost his store during the Great Depression, and the resulting hardships left a lasting impression on my mother.

My paternal grandfather, Gedalia Katz, immigrated to Winnipeg from Mizerach, Poland, just before the outbreak of World War I. My grandmother, Chava, my father, Lou, and his three siblings remained in Poland for the duration of the war. After the war, the family was reunited in Winnipeg and a fifth child was born to my grandparents. As a young boy, my father Louie went out to work to support his family. Self-taught and self-made, he brought as many family members out of Europe as he could before the outbreak of World War II. He worked in the grocery, fruit and taxi businesses before settling into the hotel business. He met and married my mother, Cecile, on July 14, 1940.

I was born in 1942 followed by my brother, Brian, in 1947. We lived in Winnipeg's north end, first on Matheson and then on Bannerman Avenue. I belonged to the YMHA as a member of the TABS. We spent wonderful summers together with friends and extended family at our family cottage in Winnipeg Beach. In later years, I would bring my three children to "the lake", spending precious time with my mother and dad. My mother was an out-going woman with a great sense of humour, always ready with a story and a joke, much like her mother, my Bobba Polly. I adored my grandmother and spent many special overnights with her as I grew up. I attended Luxton School and graduated from St. John's High School in 1959. That summer I met Lou Cogan on a blind date and we became engaged in the fall.

Lou and I were married at the Rosh Pina Synagogue in December, 1960. We moved into a small house in Windsor Park where Lou set up a dental office. I worked as his assistant and receptionist until the birth of our first child, Susan. Louie and I had two more children, Karen and Joel. While raising my children, I became active with the Sharon Chapter of Hadassah and with the Combined Jewish Appeal. In 1972 and 1974, Lou and I visited Israel with Lou's father, Dave. These were the first of many trips to Israel, resulting in our becoming supporters of the Jewish National Fund and the Technion. In 1975, I was awarded the Max Nathanson Young Leadership Award for community service. In 1976, my daughters, Susan (14 years), Karen (11 years) and I traveled to Ulpan Akivah in Israel to study Hebrew for a month - an incredible experience where we met Jews from all over the world and learned not only Hebrew, but also much about Israel. Lou and Joel (8 years) joined us for another month of touring Israel and a week in England. Although there were many other family trips, this one stands out as the most special.

In 1983, I became associated with Lou Goldberg Jewelers of Montreal as a sales representative ... an association which continues to this day and which I very much enjoy.

In 1994, my mother, Cecile, passed way and my father, Lou, followed in 1997. They played an important role not only in my life, but also in the lives of my children. My parents are remembered and loved by us all and their names live on in two of my grandchildren.

Our children are a constant source of pleasure and pride to Lou and me. Susan graduated with a Master's Degree as a Speech Pathologist. She married Yair Shachar-Hill and they live in Michigan with their two children, David Nathan and Esther (Essie) Lauren. Karen graduated with a Fine Arts Degree, followed by a Doctorate in Psychology. She and her husband, Neil Grahn, live in Edmonton with their two children, Sydney Louisa and Rebecca (Becca) Callie. Joel graduated with an Honours Degree in Commerce and is a financial adviser in Winnipeg. He married Jessica Benjamin and they have two children, Rachel Cecile and Lauren Elise, with another child expected early in 2005.

Our lives changed in the summer of 1999, when our nine-year-old grandson, David, while visiting Winnipeg, took ill and was diagnosed with a brain tumour. I will be forever grateful for the wonderful ongoing support we received from Winnipeggers, especially those from the Jewish community, who supported, encouraged and helped all of our family through those difficult years. Thankfully, David is recovering and is back in school in Michigan. He and his sister, Essie, are looking forward to celebrating their combined B'nai Mitzvah in the summer of 2005 in Winnipeg.

Through the Jewish Foundations Endowment Book of Life, Lou and I have the opportunity to show our appreciation to both the general and the Jewish communities for the support and opportunities we have enjoyed throughout our lives.

I hope that my children will remember me as a good mother, grandmother and friend, and that they will continue to appreciate the importance of "yiddishkeit", family, community and the State of Israel.