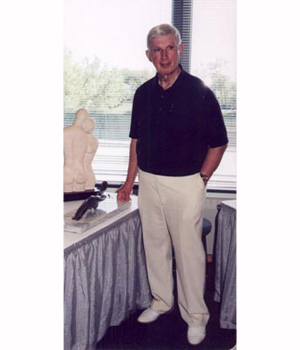 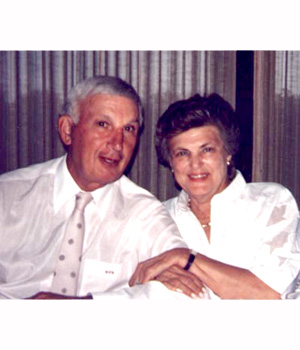 I was born in a big double house on Dufferin Avenue, the fifth child of Yisrael and Esther Silverman, on August 10, 1920. I started school in September, 1926. Travelling back and forth to the Faraday School each day became an endless succession of fistfights with the children of immigrant parents who brought their vicious anti-Semitism with them from Europe. The following year I happily transferred to Machray School where 75% of the students were Jewish.

Very early in my life I became exposed to the jewellery business. My father was a watchmaker, possibly the best in Winnipeg. My brother Abe inherited my father's skills and quit school early to work at my father's side. Of that period I remember well my Bar Mitzvah at the Ashkenazie Shule. I remember my mother making gallons of a sweet-tasting brew called mead for Passover. Mother became a marvelous cook and baker. I recall the pooter cuchen (cinnamon rolls), and the sweet concoctions she would make out of beets and carrots.

In 1935 I joined the family business. Suddenly I became aware of girls. I was a big good-looking kid and was in big demand at house parties. A friend, Joe Blye, and I bought an old car from a grocer by the name of Bernstein on payments for $35. We used it to drive to St. John's Park to ogle the girls in their shorts and tight blouses playing tennis. Our fun was very short-lived. In Europe war clouds were gathering. Hitler had embarked on his conquest of Europe and the annihilation of European Jews, and on May 28, 1940 I joined the Royal Canadian Air Force.

I served for 5½ years and was the gold medallist in my class. I particularly enjoyed the travel and seeing this magnificent country. My passion for "flying machines" continued undiminished.

With the war over, my thoughts turned to the future. I now had a wife, the lovely Lillian Mittleman who I had married on July 2nd, 1944. I opted to return to the family business, seeing in it limitless opportunities. With the help of craftsmen from Europe the repair business increased ten-fold. But the dream that my brother Abe and I had of a retail store was finally realized when we moved into our own building at 487 Main Street in July 1951. Three days later our dear father passed away suddenly as a result of a stroke. Slowly the sales of fine jewellery began to materialize. The repair business paid the bills. Big changes were made in the building and by 1972 when the business was sold, sales exceeded a million a year and the new split level building became a landmark.

We sold the business because these eastern people made us an offer we could not refuse. But in retrospect we had regrets. Silverman Jewellers was an institution that should have been retained, saved for the generations that followed. My brother Abe retired happily. I went on to establish a very successful wholesale, diamond business, and was soon joined by one of my son-in-laws. Just previous to retiring I embarked on a new career — stone sculpture, easily the most exciting of all the visual arts. I helped to organize a co-operative studio and in 1996 I was the recipient of the top award in sculpture adjudicated by the Royal Ontario Museum.

When I turned 70 I retired to enjoy the fruits of my labours. My wonderful wife and I recently celebrated our 56th anniversary and take great pride in our children, Karen & Bill Narvey, Merrill & Jeff Shwaid and Susan & Howard Mintz and our eight, fabulous grandchildren.