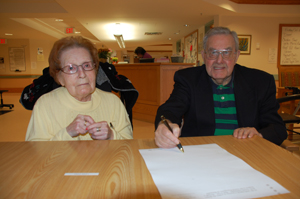 Louise signs her story for the Endowment Book of Life

They each worked in the "shmata" business — one cut; one sewed — but the most important fabric for Louise and Joe Cohen was the family tapestry they weaved together. A loving, Jewish journey from Manchester, England, to Manitoba.

Joe and Louise Cohen (née Cohen) came to Winnipeg in 1967 from Crumpsall, Great Britain, a suburb of Manchester. They chose Winnipeg in response to a Manitoba government ad in the Daily Mirror, inviting Britons to come to Canada as workers. They accepted the invitation, and have lived in Winnipeg ever since.

Louise was born in 1919 in England to Sarah and Leon Cohen. Sarah was born in Iasi, Romania, in the 1880s. Leon was born in the 1880s, also in Iasi. He, too, worked in a clothing factory, but his real calling was as a musician, playing violin and drums with his own Jewish wedding band. Louise's sisters were Bertha, Marion, and Faye. Louise is the last surviving sibling.

While Joe and Louise were both from Crumpsall, they did not know each other while growing up. They describe a colourful Jewish life in Crumpsall: Joe remembers going to cheder six days a week; playing soccer against the non-Jewish schools; attending the Heaton Park synagogue; and watching the well-dressed parade in front of the shul on Rosh Hashanah in their finest clothing at the height of the Depression.

They also remember lining up for kosher-for-Passover food distributed by aid agencies; occasional instances of anti-Semitism; and a cool climate highlighted by rain and fog. Still, it was a charming time with clothing being sold on the street and meat, milk, and other groceries delivered by horse-drawn carts.

Prior to World War II, Louise performed as a dancer and as a pantomime in various productions. During the war, she serviced aircraft; but it was at Finnegan's dance hall that she and Joe first met. Joe had served with the Royal Air Force (RAF) in France, Belgium, Holland, and Germany. They married in 1946.

They stayed in the Manchester area after getting married, and also ventured to Australia for a year. They both worked in the clothing business: Joe was a cutter, a skill he learned at a very young age; and Louise was a sewing machine operator. They worked hard, but still found time to go ballroom dancing. For Joe and Louise, life centred around the family as their children, Marilyn and Harvey, entered their lives.

In 1967, the family made its move to Winnipeg. They settled first in an apartment building at Jefferson and Sinclair and attended Chevra Mishnayes Synagogue. They later moved to an apartment on Pembina Highway, attended the Ashkenazi Synagogue, and eventually became members at the Herzlia Synagogue. Shul life has always been important to them and Joe fondly recalls that his grandfather used to lead services at a seniors' residence in England.

In Winnipeg, Joe started work immediately as a cutter at Jacob Crawley. He later found work in the retail side of men's wear and ultimately opened his own successful men's clothing store called Colliers in the underground concourse at Portage and Main.

They take great pride in Marilyn and Harvey, who both live in Winnipeg with their families. Marilyn is married to Alex Regiec and is the mother of Cara and grandmother to Corinna and Luzy. Harvey is married to Faye Rosenberg and is the father of Binyamin, Yitzchak, and Meir.

As they grew older, Joe and Louise remained as active as possible. Louise especially enjoyed being active for almost 20 years by participating in DansAerobics, a popular "exercise to music" program. She even did some fundraising as part of her participation in that program. In addition, both spent many happy hours visiting and helping with their grandchildren. They especially enjoyed attending programs at the Gwen Secter Creative Living Centre. Today, they live at The Saul & Claribel Simkin Centre, participating to the extent possible in activities. In particular, Louise still likes to exercise.

Joe and Louise are participating proudly in the Endowment Book of Life as one expression of their joy in leading a Jewish life, and as a way to give back to a city and community that welcomed them in 1967.

For future generations reading this, Joe and Louise have a simple, sincere message: "Stay Jewish!"