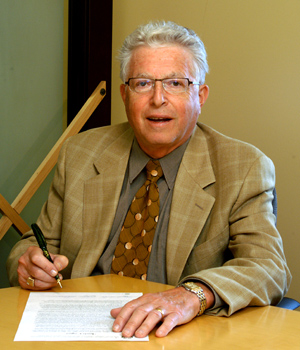 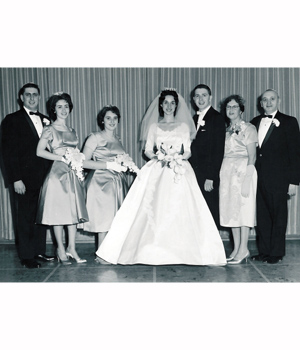 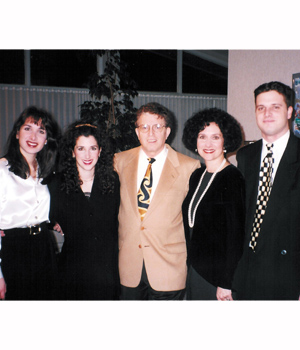 The Cogan Family|Lou and Marcia Cogan 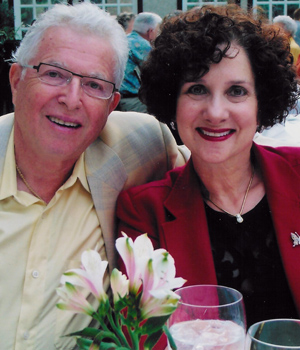 My maternal grandfather, Shai Sosowsky, was born in Ruzin, Kiev, Russia on August 15, 1870. A successful grain merchant, he married his wife, Chaia in 1895. They had five children, my mother, Bertha, being their youngest, born in September, 1909 in Pavolich. As was the case with my father, David Cogan, the Bolshevik pogroms forced them to leave Russia.

Traveling through Poland, Czechoslovakia, the Ukraine, and Belgium, the family finally boarded the Cunard's Holbrook, arriving in Montreal in April 26, 1920. After a short time in Ft. William, Ontario, they settled in Winnipeg in 1924. My parents met and were married in 1934. In August, 1929 my grandmother passed away, followed by my grandfather in August, 1939.

My father, David Cogan was born February 15, 1906, in Yarosheu, Podolia, Russia, the son of Yehuda Leib and Rose Cogan. My grandfather passed away when my father was twelve years old. The Bolshevik pogroms forced him to leave his mother and younger sister in Russia and to immigrate to Canada in 1923. Years later, he discovered that his mother had perished in the Holocaust. For a short period, he worked as a clerk in Stornaway, Saskatchewan, eventually moving to Winnipeg where he went into the grocery business.

I was born in Winnipeg in 1935, moving with my parents and younger brother, Harvey to Ft. William, Ontario in September, 1939. At that time, Ft. William/Pt. Arthur had a vibrant Jewish community and my parents maintained a traditional kosher home, practicing tzedakah even when funds were very limited. My father, David, found employment at Stitt and Son Clothing after a short period of working for his brother-in-law. During World War II, as young boys, my brother and I experienced many personal incidents of anti-Semitism. My sister, Leya, was born in March, 1946 with severe physical handicaps and this had a profound impact on the whole family. My mother often had to leave us with my dad for long periods to seek orthopedic attention for Leya in Winnipeg. In spite of these hardships or perhaps because of them, our family was a close one - committed to each other. In 1961, my parents and sister moved back to Winnipeg where both Harvey and I lived with our families. My dad established David's Men's and Boys Wear on Marion Street. My parents were loving grandparents to our children who were a great source of "nachas" to them. In 1970, my mother, Bertha, passed away. My father, David, passed away in March 25, 1979. My parents enjoyed a close relationship with my children and are remembered with great love and respect.

I attended Central Public School, graduating from Ft. William Collegiate in 1953. I regularly attended Shaarey Shomayim Synagogue and took Hebrew classes at the B'nai Brith Hall. For several years when there was no rabbi or Jewish teacher, I taught others Haftorah. I was active in Young Judea, often attending their summer camps. As a young boy, I sold newspapers and worked weekends at Safeway. The summer I was seventeen I worked the midnight shift at the Abitibi Paper Mill. When I turned eighteen, my brother and I became Fuller Brush salesmen, with our father helping with the bookkeeping and filling of orders. With the income earned, I was able to move to Toronto to attend the dental school there.

I lived at the Alpha Omega Fraternity House for five years while attending the University of Toronto. Many Winnipeggers attending dental school there also lived at the frat house and I made lifelong friends during that time. Shortly after graduating from dentistry in 1958, I moved to Winnipeg where, for a short time, I worked for the government and in a satellite practice in Emerson, Manitoba.

I met and married Marcia Katz in December 27, 1960 and started a private dental practice in our small home in Windsor Park. Those were happy years for Marcia and me, with my in-laws and my parents nearby as our three children, Susan, Karen and Joel were born. In 1972 and 1974, Marcia and I visited Israel with my father, who was reunited with an uncle, Moishe Manulius, whom he had last seen fifty years earlier in Russia.

In 1991, after many years of practising in Windsor Park, I built my own clinic on Marion Street where I practiced until my retirement in 1996. Over the years, I was a member of the Manitoba Dental Society, the Winnipeg Dental Society and the Alpha Omega Fraternity, serving as president in 1968-69 and regent in 1981-82. I also served a term as the president of the local chapter of Technion. Marcia and I are supporters of the Hebrew University and the Jewish National Fund. I served as chairman of Men's Youth Aliyah dinner for Hadassah-Wizo and am a supporter of the Shaarey Zedek Synagogue, which I attend regularly. A member of the Glendale Country Club, I served several years as the tennis chairman. In 2000, my brother Harvey and I visited Thunder Bay, with the view of putting together a project on the Jews of Thunder Bay for the Jewish Museum of Western Canada. We worked with many others to make this project a reality in 2003.

Presently I have six grandchildren, with one more expected in early 2005. My grandchildren are a source of pride and joy to Marcia and me.

Living in Winnipeg afforded me the privilege of living and bringing up my family in a warm, vibrant Jewish community, where people care about one another. This was certainly demonstrated to us when our grandson, then nine years of age, was diagnosed with a brain tumour. We are so grateful that he is doing well now.

The Jewish Foundation Endowment Book of Life allows Marcia and me to participate in a meaningful way in helping future generations of families to flourish and to have all the wonderful opportunities that we have enjoyed.