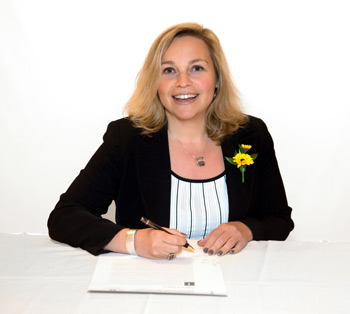 Lori Binder signs her story for the Endowment Book of Life

To celebrate the milestone of life that is my fortieth birthday, I want to make a commitment to the community that has had a powerful influence on my life to date. Indeed — I am who I am to a tremendous extent because of the experiences I've had as part of Winnipeg's Jewish community, and the many people who have had a profound influence on my life: teachers, counsellors, classmates, colleagues, mentors, family and friends.

I was born in Winnipeg in 1973 to Pinchas (Peter) and Karen (née Roytenberg) Binder. My father was born in Tomashov, Poland, in 1929; he made Aliyah to Israel in 1953 with his parents, Mindel and Yossil Binder who had originally come from Zamosc, Poland. He lived in Kfar Saba along with his sister and three brothers and later came to Canada where he met my mother.

My mother was born in Winnipeg in 1943. Her parents were Ida and Nat Roytenberg. Ida was born in Winnipeg and her family brought Nat over from Kovol, Poland before World War II. They married and had a beautiful life together. My Zaida Nat, like many Jewish immigrants, was a furrier, and my Baba Ida was the rock of the family, giving of her time to many community organizations. She was truly a role model to me. The years I had with them are among my most cherished and lasting memories that continue to fill my heart. Their house on Smithfield Avenue was filled with a Jewish spirit and a love of life.

The home I spent my childhood in was on Embassy Lane in Garden City, which at that time was called home by many families in the Winnipeg Jewish community. The streets were filled with many of the kids I went to school with, which helped forge amazing friendships for me and my older sister, Estelle, who now lives in Edmonton with her husband Dan Tzur and my nephew and niece, Matan and Maya. It was as an infant that I took my first family trip, to meet my Saba and Savta in Israel. I celebrated my Bat Mitzvah at B'nay Abraham Synagogue and was lucky to have both my beloved baba and zaida celebrate this milestone with me. It was with my zaida that I also attended Rosh Pina Synagogue, and those occasions are always vividly brought back when I attend Etz Chayim Synagogue today.

Talmud Torah was where I attended school for my elementary years, and I later graduated from Joseph Wolinsky Collegiate in 1991. It was during my high school tenure that I learned what joy and meaning can be found in connecting with the community. I was active in Kadima, BBYO, and especially USY where I began to grow leadership skills serving on both the local and regional boards. Camp Massad was the place I spent seven amazing summers, and its experiential learning and rich atmosphere permeated me and stayed with me from that young age. I went on to be a counsellor at Camp Playmore and was a leader for children's programs at the YMHA because of my experiences at Massad.

After graduating from JWC, I found myself longing for even more Jewish learning — and even more so, an opportunity to live in Israel. Hence I traveled to Jerusalem to study at Brovenders, an advanced institute for women's Jewish studies. It was one of the formative experiences on my personal Judaic journey. Following that, I returned to Winnipeg to pursue a Bachelor of Education degree from the University of Winnipeg, majoring in Judaic Studies. During my university years I was active in the Jewish Students' Association and the Jewish Students' Network, a National Jewish student advocacy group, and had the opportunity to organize events in our community such as a rally for Soviet Jewry and a Bone Marrow Drive for the Gift of Life Bone Marrow Foundation.

Upon graduation, I was offered a position to teach Judaic Studies at my former high school, JWC. I naturally took the job and fell in love with teaching. In my first year I was teaching on Matheson Avenue; my former teachers were now my colleagues. The following year we moved to the Asper Jewish Community Campus where Gray Academy of Jewish Education was founded. I spent five years in the classroom full-time before going on to also serve as a Judaic Studies Coordinator and Team Leader. This opportunity led me on my path to pursue a career as an educational administrator.

Continued professional development has always been an important part of my professional growth. I attained my Master of Education degree in Administration and Supervision from Chicago's Loyola University in 2002, through a program designed for full-time Jewish educators, and became Vice-Principal of Gray Academy of Jewish Education in 2004. I was honoured to be recognized with a University of Manitoba Excellence in Teaching Award and a Grinspoon-Steinhardt Award for Excellence in Jewish Education. It has served as a reminder of those teachers who profoundly impacted my life.

Contributing my time to both the Jewish community and the Winnipeg community at large has enriched my life in ways small, great, and inexpressible. I am a Past-President of the Sarah Sommer Chai Folk Ensemble and, at the time of writing, am chairing Chai's fiftieth anniversary celebration. The decade of service to this board has given me a creative outlet and an opportunity to work together with people who are passionate about celebrating Judaism and Israel through music and dance. My time volunteering at Nine Circles Community Health Centre also gave me an opportunity to contribute to the important work of caring for individuals living with HIV, a cause dear to my heart.

I love adventure and treasure my years-long relationship with my partner, Kenton Smith, with whom I continue to travel and explore the world. I am grateful to the mentors in my life and the circle of friends who I consider my "chosen family."

Through my participation in the Endowment Book of Life program, I am investing in the community that helped raise me. I am also giving back to the Jewish Foundation that has contributed to my professional growth, as I was a recipient of both the Mark and Dorothy Danzker Scholarship and the Grosberg Family Judaic Studies/Hebrew Educators' Award. My hope for our community is that it will continue to find a way to embrace contemporary life through a Jewish lens, and with a global outlook.