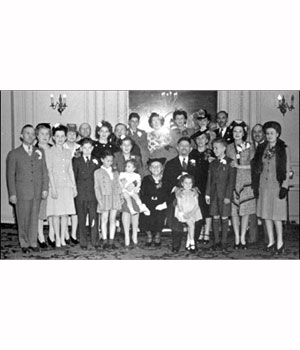 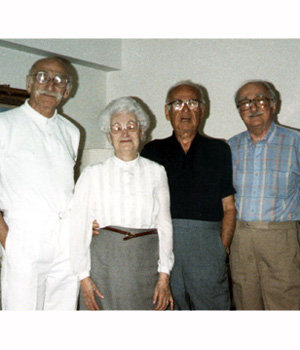 I owe a debt of gratitude to my parents, Anne and Alex Cantor who gave meaning to everything that I do with my life. They taught me by example that love and family are the most precious ingredients in life. Our guiding principle was that family is always of paramount importance, and that the love, loyalty, affection and devotion that are found in a family cannot be encountered anywhere else.

I treasure everyone in my family: my children Dale and husband Jerry, Barbara and husband Rob, Francie and Larry and my granddaughters Blaire, Lexi, Gabrielle, Alix and Jillian, my sister Phyllis Wilder and her husband, Marshall, their children Leslie and David, my aunts, uncles, cousins, and nieces, and my life partner, Doug, above all else.

My parents, like many Jews of their generation, immigrated to Canada from Russia/Poland around the turn of the century. Together with their parents and siblings. My father's parents, David and Hoodel Cantor, were traditional Jews who came to Canada in 1901 and who, while maintaining their Jewish roots, also placed great value on education and on participation in the cultural life of Winnipeg.

My mother, Anne Cantor, immigrated in 1902 and was a member of the Secter family, a Winnipeg family known for their commitment to Israel and Jewish traditions which she also strongly upheld. Her parents, Moses and Pesel both died when she was very young and she was raised by her extended family of aunts and uncles.

My father, Alex Cantor who was a lawyer by profession, was a man who believed in giving service to his community and was active in many aspects of both the Jewish and general communities. His activities covered a broad range from President of Shaarey Zedek Synagogue to Chairman of the Community Chest, which was the forerunner of the United Way of Winnipeg.

My own community involvement stems from their example and over the years I have participated actively in Hadassah, National Council of Jewish Women, Winnipeg Jewish Community Council, State of Israel Bonds, the Manitoba Theatre Centre Board, the Winnipeg Art Gallery Board, as a Regent on the Board of the University of Winnipeg and as a member of the Board of The Jewish Foundation of Manitoba.

The fundamental beliefs in the values of education, philanthropy and family that were instilled in me by my parents are the same ones that I have endeavoured to pass on to my children and grandchildren to ensure the continuity of a Jewish way of life in Winnipeg.