Lillian Mostow - in memory of Clara and Moishe Halparin 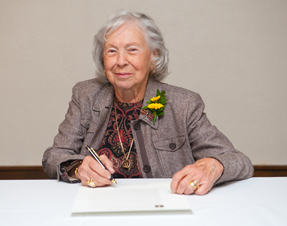 Lillian Mostow signs her story for the Endowment Book of Life, in memory of Clara and Moishe Halparin 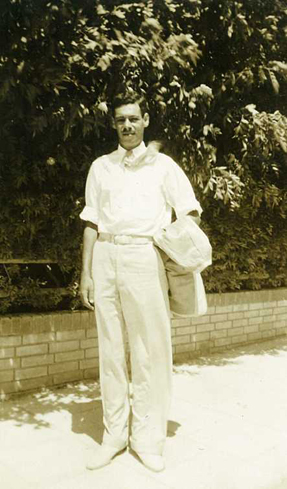 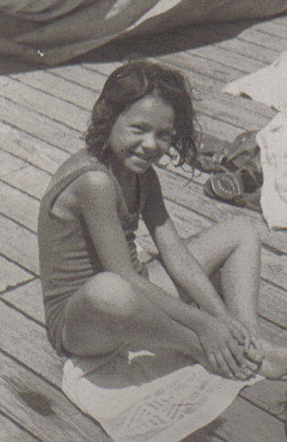 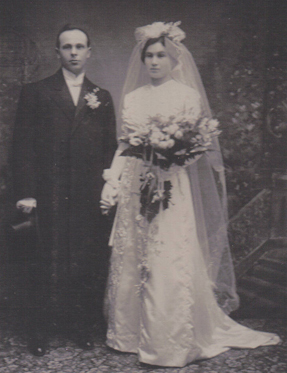 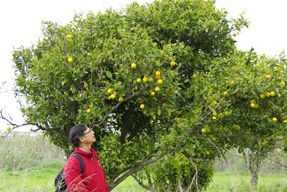 Dr. Elliott Halparin, February 2011, with the few trees left in our former orchard

I was eight years old when my parents took me to Palestine, in the spring of 1935. My father, Moishe Hirsh Halparin, decided to take my mother to Palestine to see the 75 dunam (18.5 acre) orange orchard in Ness Ziona that he'd bought in 1931. My mother, Clara, wouldn't leave me behind because I was so much younger than my four siblings. My eldest brother, Bill, was managing the orchard following his graduation from engineering at the University of Manitoba.

More than 75 years later, the trip is still vivid. We travelled from Winnipeg to New York by train, and then by Cunard line to Le Havre. As the only child on board, I was given free reign to explore the entire ship. I loved being able to order whatever I wanted for dinner; my favourite was duck stuffed with apples. We stayed in Paris for three days in a small hotel, where we got stuck in the elevator cage between floors. I crawled out and ran downstairs to alert management. From Paris, we took the train to Marseille, where we caught an Italian ship to Haifa.

We rented an apartment for two months on Allenby Street in Tel Aviv. From there, we would take a sherut (a shared taxi) to the orchard. We took bus tours to different parts of the country: to the archeological digs in Caesarea; to the Dead Sea, where my father, in the classic pose, sat upright in the water reading a newspaper. I had cut my toe, and remember how much the mineralized water stung.

To celebrate Pesach in Jerusalem, we had to travel in an armed bus convoy. At one point, the Arabs opened fire. We all lay flat on the floor until the shooting stopped. When we eventually got to Jerusalem, I watched the men daven at the small patch of the Wailing Wall that the Arabs allowed Jews to visit twice a year, at Pesach and New Year's.

My father was born in 1883 in what is now Belarus. At 21, with his father, Wolfe, and younger brother, Archie, he fled the pogroms and inevitable conscription to the Czar's army. They settled in Winnipeg in 1904, in a small house at 381 Dufferin Avenue, at the foot of the Salter Street Bridge.

The Halparin men went into the wholesale meat business. Wolfe died in 1906, and in 1909 my father decided to marry. He sent for his 24-year-old cousin Clara Fiskin, from Propoisk. He met her off the boat in New York, where they were wed.

After Moishe and Clara settled into their home on Dufferin, my father undertook to get the family out of Russia to Winnipeg. He brought over his older brother Isser and wife Rachel, and their seven children. After the First World War, he brought over two of his three sisters, Henia and Chaika, and his half sister Sara Choslovsky. He also brought over his wife's two sisters, Noonie Rosen and Bessie Raeve, and their families. Bessie, a midwife, had been deafened in the war.

My father was a dandy who travelled frequently to New York to buy his bespoke suits and shoes. He always wore white linen suits in summer. His car was equally flashy — a 1921 touring Packard, four-door convertible, with canvas roof and clip-on celluloid windows.

He was also a successful entrepreneur. In 1925, he sold his share in the wholesale meat business to his brother Isser and bought a small knitting business. He built a factory next to our house, and moved in the knitting equipment to make sweaters. Called Standard Knitting Company, it comfortably supported our family, and employed all my siblings until they eventually sold the business in the 1960s. My father also owned an apartment building in St. Boniface, where he built the city's first cinema, the Paris Theatre, on Provencher, across from City Hall.

An ardent Zionist, my father gave generously to the Jewish National Fund over the years. In the 1920s, his $5,000 donation bought 100 dunams of land for Sede Zvi, a moshav in the northwestern Negev. After his death, we discovered a special bequest in his will for a poor Jewish boy in Palestine whom he had been supporting for years.

My father had intended to retire to his orchard, a dream he never realized. He died of a heart attack in 1947, a year before Israel declared independence. He was 63.

After his death, the orchard carried on under the care of an Israeli manager. In 1973, an Israeli developer made an offer for the land, intending to build condos. My husband, Harold Mostow, my brother Archie, who was fluent in Hebrew, and I went to Israel, where my husband negotiated the sale on behalf of the family. The paperwork was finalized shortly after the Yom Kippur War, thus ending our family's 42-year land ownership in Israel.

In an ironic twist, the authorities refused to rezone the land, so it remains abandoned and derelict, surrounded by Rechovat's hi-tech park on one side, Ness Ziona on the other.

On a visit to Israel in early 2011, the younger son of my late brother Bill, Elliot Halparin, and his wife, Nancy Wigston, decided to try to find the orchard that had played such a prominent role in our family's history. By e-mail, I put them in touch with Karen Dankwerth (née Margolese), a cousin of my husband and a former Winnipeger who has been living on Kvutzat Shiller, not far from the orchard, since 1966. The three of them made a pilgrimage to the spot, where only a few neglected orange trees remained, along with a crumbling stone dwelling. There, they snapped a few photos to reacquaint us all with my father's legacy.