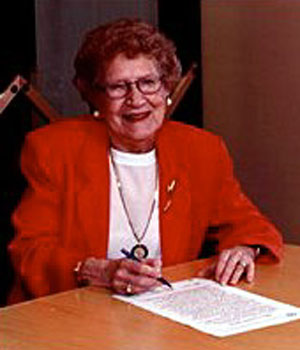 My family's roots go back to 1911 when my grandparents and their children (the Soudacks) arrived in Winnipeg from Podolia Gubernia (near Odessa). My father, David, married Fanya Glinter in Winnipeg in 1914 and they produced three children - one boy and two girls. The family established Soudack Fur Auction and Sales and became involved in all facets of the Jewish community.

I was born in 1916, lived on Pritchard Avenue, began my formal education at King Edward School and continued it at Isaac Newton, St. John's High and the University of Manitoba (where I was a member of Iota Alpha Pi Sorority). Peretz Folk Shul's after-public-school classes enhanced my cultural and religious Jewish upbringing. I have very vivid and fond childhood memories of large family celebrations of the Seders and the High Holidays.

In 1936, I married Myer Mozersky (deceased 1968) and take great pride in our four children: Serky Goldberg (Benny), Ken (Anne), Dan (Joy), and Ruth Grubert (Oscar). My children have gifted me with ten grandchildren (four of whom are married), and seven great-grandchildren. After being a widow for eight years, in 1976 I married Aaron Dozar, who passed away in 1988. Aaron's three daughters are very much an integral part of our family.

Looking back at my life, I realize that I dedicated myself to being a wife and mother, but I also served as a volunteer and worked as a business manager. I served as President of Hanita Chapter of Pioneer Women and of the Gimli Summer Club, and was Chair of the Women's Division, U.J.A.

I hope that my children, grandchildren and great-grandchildren will follow the traditions set before them by their elders: that is, that charity, good deeds and education are essential components of a life well lived.

When I think about the future my hope is that the Winnipeg Jewish community will grow from strength to strength and that my descendants will continue to support it.