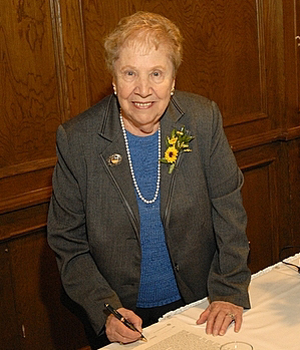 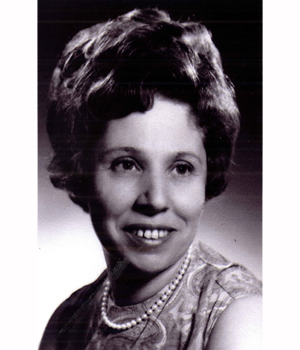 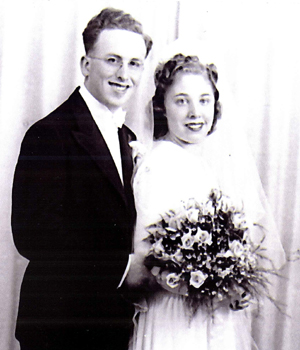 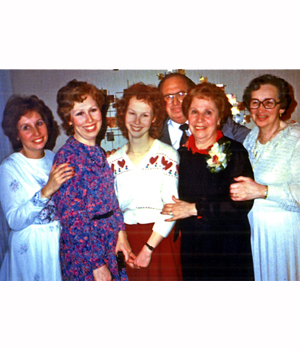 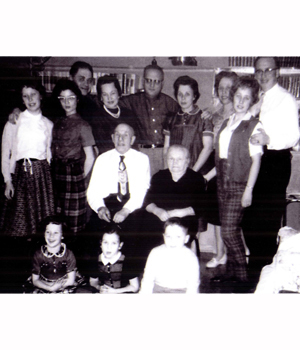 Lil Matchan was only two years old when her family emigrated from Gomel, Russia in 1925, but she managed to make quite an impression upon her arrival in Canada. Apparently she was crying so much while they waited in line at Pier 21 in Halifax that her family was allowed to pass through without answering the customary questions.

Lil's parents, Jacob and Bluma (Yusprach), had originally planned to immigrate to Chicago, but were unable to acquire the proper documentation so that Bluma's mother, Rachel Finkelstein, could join them. Instead they chose Winnipeg where two of Jacob's sisters already lived. Lil and her siblings, Isaac and Ann (Narvey), grew up on the corner of Andrews and Selkirk Avenue above the family's grocery store. Their mother, a quiet and sweet woman, cared for them and worked in the store full time alongside her husband, Jacob, a clever and decent man, who was well known and well respected in the community. He was involved with the Lubavitcher Shul and served as president of the Associated Retail Grocers. During his tenure as president, he closed his Selkirk Avenue store, moved his family to Anderson Avenue and opened up a creamery.

Lil attended school at William Whyte, Aberdeen, Machray and St. John's Tech. She remained at Tech even after her family moved out of the north end, when the creamery closed, in order to open a new store on River Avenue. Lil began working in the store while she was in grade ten. Although she hoped to enroll in business school after high school graduation, her father did not support that idea. Instead she continued working at the store until she married in 1942 at the age of 19.

Lil first met Red (Isadore) Matchan when he crashed her sister's wedding. They were reacquainted shortly afterwards at a New Year's Eve party and he asked her out two weeks later for her birthday. They were engaged that March and married at the Hebrew Sick Benefit in August.

When Lil and Red married, he was working as a menswear buyer at the Varsity Shop. When their oldest daughter, Carol, was a baby, Red became a partner in an Elmwood grocery store with Lil's father and brother. Unfortunately they soon lost the business in a fire.

Eventually Red became a traveling salesman, often going on the road for as long as ten weeks at a time. That was a difficult period for Lil as she remained at their home alone with their daughters. During this time she became involved with Pioneer Women and ORT so that she would have an opportunity to socialize and get out of the house once in a while.

Red then began an entirely new career as an insurance salesman for the Manufacturers Life Insurance Company, later called ManuLife. While it was slow going at first - prompting Lil to begin working outside the home part-time at the Bay and then in an architect's office — he eventually enjoyed success. Lil and Red were able to indulge their love of travel, taking many enjoyable trips to far-flung places, including South Africa, England, Europe, the Caribbean, Hawaii, and Israel.

Red was good to his clients, was well liked and well respected, and when he retired after 30 years he was given the most extravagant farewell party the company had ever hosted. After many years of ill health, Red passed away in1999 while Lil was in Israel for their granddaughter's wedding. She believes that he timed his death so that she would be in the embrace of their daughters and other extended family members.

Their daughters have been a consistent and tremendous source of support for Lil. Although all three and their families live away from Winnipeg they are in constant touch with her through regular phone calls, emails, letters and frequent visits. (When Lil visits her daughters, she never fails to bring some of her home-cooked specialty food items, including knishes, blintzes, and apple cake.) Carol and her husband Ben Novis from South Africa, live in Israel where they have three daughters and three grandchildren. Carol is a journalist who has worked for The Jerusalem Post and the Ha'Aretz daily.

Judy, a former El Al representative, and her Winnipeg-born husband Russell Weidman, live in Houston, and their two daughters live in Los Angeles and New York respectively. Linda and her husband David Israel, also a Winnipegger, and their two children live in Boston, where Linda writes for the Boston Globe.

Her children, Lil says, are her greatest achievement, and family in general, she adds, is the most important thing in life. In her later years, though, she has continued to grow and thrive. She has maintained her lifelong friendships, and has made many new friendships when she travels and visits her children in their home towns. She continues to travel widely, including cruises to Alaska, Europe and South America; has learned to play bridge; and has taught herself to use a computer, which she relies on to stay in email contact with her children and nieces and nephews, and to keep the connections strong among family members.