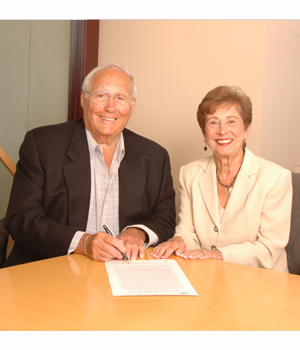 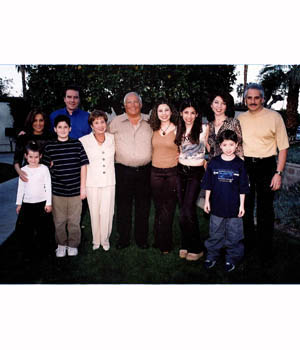 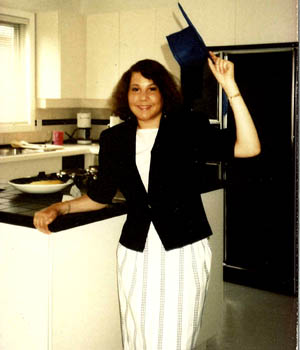 Lil and Lloyd's daughter Marla who passed away at age 32 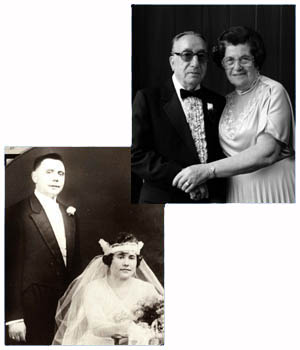 L to R Louis George and Amelia Feinstein in February 1918, Bella and Jack Medved on their 50th wedding anniversary 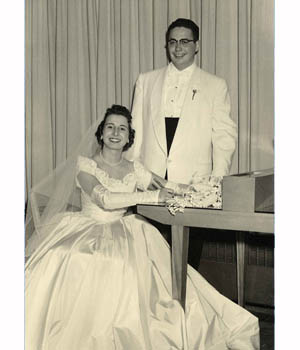 As we tell our story together, it becomes most obvious that we have had our share of joy and sorrow in our lives both as individuals and as a couple, on balance though, the good outweighs the bad. Our purpose in telling our story is to pass on to our grandchildren a sense of their background and some of the life lessons that we both learned.

Lil: My early life was one of security, happiness and involvement. I was one of two daughters born to Jack and Bella (Steinworzel). My parents came to Canada from Russia and Poland respectively. My dad and his brother Hymie ran North End Tire, arguing with each other daily, but in a truly loving manner. My mother arrived in Canada with her sister Bessie after walking through Poland in a pair of cardboard shoes. She was, in spite of her earlier hardships, the most positive of people who provided my late sister Pearl and me with a warm and loving home life.

My life as an adolescent was secure, in school and university I was involved competitively in athletic activities, in particular volleyball, basketball and track and field. My social life revolved around school at Luxton, St. John's and nine years at Sholem Aleichem School where my "leftist leaning" father wanted me to be educated, and at the YMHA, where many of my present day friendships began. My memories are of good times especially at school and as a member of the "Personaliteens" and then the "YAC" (Youth Athletic Club). My home was culturally Jewish. We celebrated all the holidays, but religion was not a forced responsibility. I always felt Jewish although never restricted.

This unspoken expectation about maintaining a Jewish identity spilled over to include a university education. Graduating at age 20 in May of 1955, I married Lloyd on June 19 at the Shaarey Zedek Synagogue and started my teaching career at Montrose School in September. 1955 was a good year.

Lloyd: My background was not quite like Lil's. My father, Louis George, known as L.G., was a natural born salesman. This gregarious and outgoing gentleman was often canvassing for the Shaarey Zedek or B'nai Brith but was at his best when he was selling himself. Traveling as a salesman in Toledo, Ohio he met Amelia Selker, who was then engaged to be married. Not one to be easily deterred, L.G. had his rabbi from Saskatoon provide Amelia's father with a character reference and the rest was history.

After a few more years in Saskatchewan, L.G. eventually relocated his family to Winnipeg in 1929. I was born in Winnipeg, the youngest child by eleven years to two older brothers, Alvin and Myron, and a sister, Gwen. My adolescence was spent at the family home on 72 Harrow. My sense of Judaism came from maftir lessons from Mr. Serulnikov and from my Bar Mitzvah at the Shaarey Zedek on Dagmar Street, as well as from my parents' strong community participation and orthodox religious traditions. After my father's death, my mother moved to California where two of my brothers had relocated.

I worked as a senior counselor at BB Camp, where I first met Lil who was a junior counselor. I tried to fix Lil up with a friend who was infatuated with her, but Lil was not interested. I then realized that we had a liking for each other and, just like my father courted my mother, I started courting Lil. We became an "item" for the next four years until we married.

Lil: While Lloyd worked towards earning his C.A. designation, I was the main wage earner in the family, teaching split grade 2-3 classes at Montrose and gradually becoming involved in special education. I had a great career in education but when the first of our three children arrived and Lloyd became a C.A., it was time for me to remain at home. First came Lewis, who now lives in Toronto with his wife Lana and their three children Jenna, Brooke and Zach. Lynne, our second child, lives in San Diego with her husband Bill and their two children, Sean and Mallory. Our third child, Marla, had a difficult life health wise and passed away at age 32 from diabetes complications.

As our children grew and Lloyd's career blossomed, I was able to return to the education field and spent twenty-one years as a resource teacher at Ramah Hebrew School. Lloyd had gone from a struggling C.A. student to a qualified accountant with a practice in Neepawa followed by a partnership at Laventahl Horvath. Lloyd also became one of the first individuals with a CBV designation, a qualification that he still utilizes.

In the 1990's, with our children grown, Lloyd developed problems with diabetes, an illness our two daughters struggled with also. With the passing of Marla, the aging of my mother and Lloyd's decision to slow down, it was time for me to also end my teaching career. It was a decision that I do not regret. Lloyd and I are enjoying our life together with travel, visiting family and being with friends. Lloyd has returned to his music which was put on hold since he was 17.

Both Lloyd and I feel positive about being Jewish in Winnipeg and hope that the Jewish people of Winnipeg will continue to make this community one that people will always be proud of.

To our children, of whom we are so proud, we say that "we tried to be the best parents we could", and to our grandchildren we say that "we hope your lives are filled with love, laughter and sensitivity toward others, and that you will aspire to always try to do your best and remember with pride your Jewish heritage