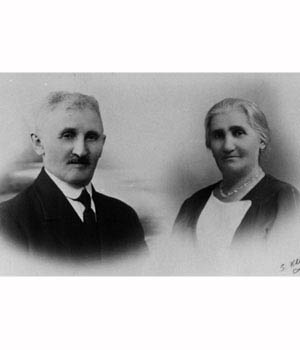 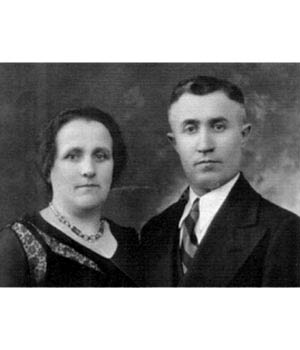 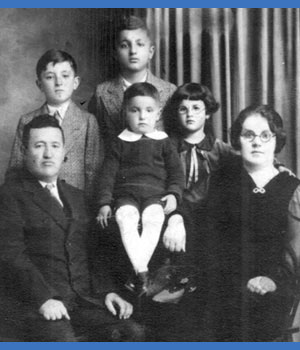 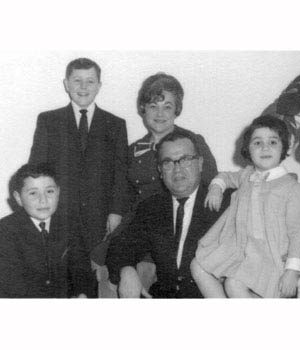 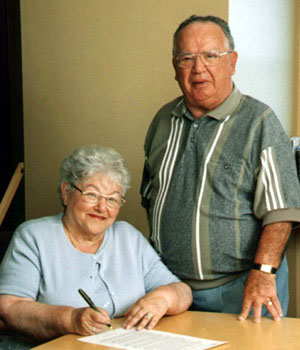 Nathan's father, Charles Duboff, was born in Kiev in 1899 and immigrated to Winnipeg in 1905. When Charles' first wife died in the flu epidemic, her sister Eva (Rifka) Weisman came from Argentina to care for his sons Max and Sam. Charles and Eva married and had three more children, Marcia (Meltzer), Nathan (Spud) - who was born in 1925 - and Reuben. Charles operated a grocery store and the family lived on Stella Avenue.

Nathan, who has always been known as `Spud', attended Aberdeen School and then went to work to help support the family. He spent three years in the Royal Canadian Air Force, where he particularly enjoyed playing professional baseball for the service. Upon his return to civilian life he went to work for Silpit Industries. In 1953 he changed to the lumber business, starting with Brown & Rutherford, then later as sales manager for Portage Lumber and Dominion Lumber, and retiring as sales manager for McDermot Lumber in 1995. Baseball has continued to be a favorite pastime.

Lil's zaida, Jacob Portnoy, arrived in Winnipeg in 1908 and found work as a clothes peddlar. This led to a job cleaning clothes which, in turn, led to the formation of Portnoy Brothers Cleaners, later renamed Perths Cleaners. In 1919 he sent for his wife Chava to join him and in 1924 arranged for his married son Chaim to emigrate. Chaim's wife Pessie (Schmuckler), however, was pregnant with Lil at the time so the family had to delay their departure until after her birth. Just 3 weeks after Lil was born on March 20, 1925, the family fled, the borders were closing and the political situation was tense. Lil was 9 weeks old when they arrived in Winnipeg.

In Winnipeg Chaim joined his father and brothers Nathan and Percy Portnoy in the dry cleaning business, remaining there his entire working life. Lil grew up in the north end with her older siblings Dave, Joe, Leonard and Sarah (Dudeck). She attended the Folk Shul, William White, St. John's High School and Burroughs Business School, then worked in the offices at Perths, Stalls, Silpit Industries and Mooni's Catering. Later she also worked at Sears and at the YMHA, where one of her accomplishments was organizing the transportation program.

Lil and Spud married in 1953 and had three children. Their son Charles, born in 1954, is a high school English teacher with two children - Carly who is a graduate student at University of Manitoba and is serving as assistant director of B'nai B'rith Camp, and Matthew who is attending Brandon University on a music scholarship. Their son Neil, born in 1957, is a lawyer. He is married to Carol Herst, she is a school teacher and they have three children, Jonathan, Michael and Rachel who all attend school at the Campus. Their daughter Cynthia, who was born in 1960, is currently between jobs. Charles, Neil, Carol and Cynthia are all involved in the community, especially the Jewish community.

Both Spud and Lil have been active community volunteers. Spud has been very active with B'nai Brith for many years. He has been a driver for the Manitoba Cancer Society and Meals on Wheels and has worked on behalf of the Heart and Stroke Foundation. Lil has worked for the Peretz Shul, Chevra Mishnayes Sisterhood, B'nai B'rith Women and ORT. Currently she is a volunteer with Jewish Child and Family Services. Lil credits her love of community and positive outlook on life to her parents and zaida. Her father and zaida were both very orthodox men - her father went to shul every day after his retirement, even when he was in ill health. He was a very calm, good-natured person who never spoke ill of anyone.

Lil and Spud hope that there will be a strong future for the Jewish community. They hope that even with an increase in intermarriage and assimilation, people will continue to feel connected to the community and appreciate the opportunities that exist here. They also hope that the beautiful Yiddish language will not be lost, but continue to be embraced by future generations.