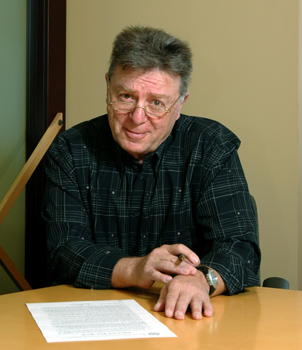 Ken Jacob signs his story for the Endowment Book of Life 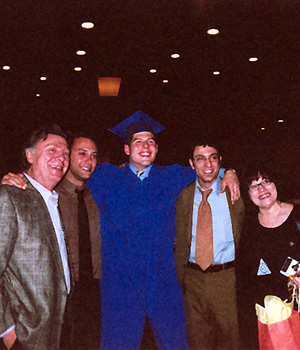 After 25 years of marriage, Lesley (Haid) and Ken Jacob are happy to report that they have been lucky at love - the second time around. Both readily admit as well that they have traveled on some very bumpy roads to get to this point in their lives. For Lesley, especially, the bumps in the road came early in her childhood.

Lesley's father, Harold, was one of seven children born to Moses and Beca Haid. Harold was a major in the Queen's Own Cameroon Highlanders when he married Alice Mantell, and left the army reluctantly on her urging. He opened Western Shirt and Overall in partnership with his brothers and then, when they lost the business, worked at Curtis Jewelry.

Curtis Jewelry was owned by Alice's mother, Rose (Shuster), and her husband Abe Mantell. Abe was a former Feather Weight Champion of the World and a Golden Glove award winner, and had also owned a barbershop. He loved to gamble and used to let Lesley pick the winner of the Friday night fights.

For most of her childhood, Lesley lived on Waterloo Street in River Heights, attending Brock Corydon School and then Grant Park High. When Lesley was just ten years old, and her sister Susan was fifteen, their mother became ill with cancer. After several operations and trips to the Mayo Clinic in Rochester, she died two years later at the age of forty-two. Lesley's father was a very sweet and loving man, but he had difficulty coping after his wife's death. Susan soon moved away from home, and Lesley and her dad moved to an apartment on Grant Avenue. He was often out of town, and Lesley essentially raised herself, moving out on her own at eighteen.

While she had been involved with the Jewish community to some extent, even serving as president of BBYO's Chaluzot chapter, Lesley found it difficult dealing with her family situation while being surrounded by so many seemingly stable, wonderful Jewish families. She also felt that the community had failed her father. As a result, for many years she disassociated herself from anything Jewish. Over the years she worked at Curtis Jewelry, as a pharmacy technician, and in a dental clinic. A marriage at age 23 lasted a brief time.

Lesley met Ken on a blind date in January, 1978, shortly after her father died. They were married in October, 1979. Ken's son, Sean, lived with them, and their son, Hart, was born in 1982. Since then Lesley has been very involved with the Winnipeg International Children's Festival, and helped develop its Circus and Magic Camp. Currently, she is the administrator of Camp Massad.

Unlike Lesley, Ken cherishes many good memories about a childhood spent enveloped by family, kibitzing and music. Born on November 28, 1942, on a day when the snow was waist high, he lived with his parents, Aubie and Sophie, first on Mountain Avenue and then in Dauphin, Manitoba. There, Aubie designed and assembled parachutes for the Air Force. He was also a pianist.

Ken too played piano for many years, giving it up when he realized he would never be as good as his father. Back in Winnipeg, he took up singing instead, and would sit on the steps of the family home on Enniskillen Avenue, memorizing the songs that his dad's band practiced. He would then sing these at the weekly Friday night gatherings at his grandparents' home on Aberdeen.

Ken is very appreciative of the fact that all four of his grandparents remained alive and involved in his life until he was a young man. His grandfather, Alec Jacob, worked at Jacob Crowley, and every year made Ken a coat that was invariably too big. His grandmother, Rose Jacob, had a great sense of humour, and was often the good-natured victim of family pranks. Ken's maternal grandparents, Frank and Sara Ratner, lived on Jefferson Avenue, and were the parents of five daughters and one son, who was killed in World War 11. Sara was a fabulous cook.

After graduating from West Kildonan Collegiate, Ken received a BSc and a Masters from the University of Manitoba Medical School, and a PH.D in cancer research from Edinburgh University. He married his first wife in 1967. His oldest son, Sean, was born in Edinburgh, and his second son, Jonathan, was born in Bristol, where Ken was completing his post doctoral studies. Ken returned to Winnipeg to teach just as a hiring freeze went into effect. He accepted a three year fellowship instead, then taught briefly at Red River Community College, before joining his cousin's property management company. A year later he bought the company and renamed it, Kenneth Jacob Ltd. He ran the company for 25 years. During this time, his marriage broke up and his wife and sons moved back to her hometown. When he was eight years old, Sean, moved back to Winnipeg to live permanently with Ken and Lesley.

Today, Ken is pleased that all three of his sons live in Winnipeg. The youngest, Hart, still lives at home, giving Ken and Lesley many opportunities to marvel at how terrific a kid he is. He is very involved in the Jewish community, loves to volunteer and to help others. This is clearly a lesson learned at home, for both Lesley and Ken hope to be remembered too as people who cared about others and helped them whenever they could.