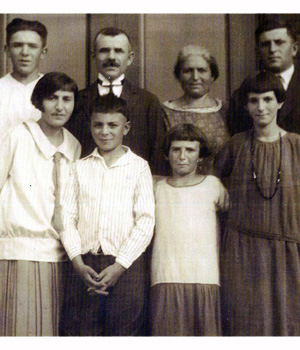 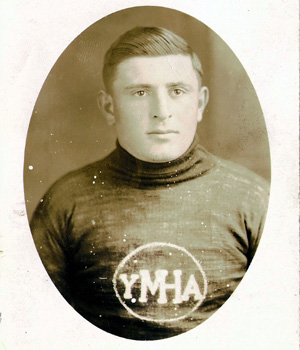 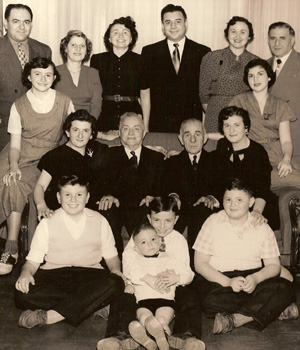 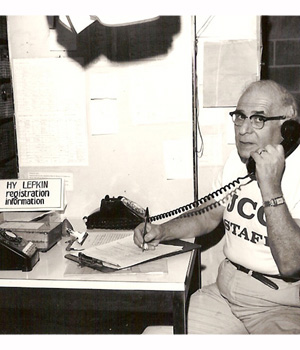 Circa 70's...Hy at work in Jewish Community Centre (Vancouver) 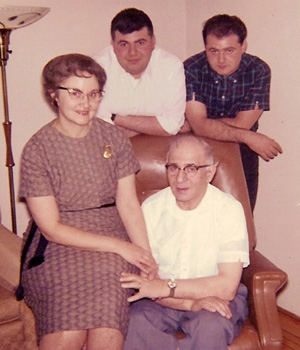 My mother's parents, Jacob and Eda Scher were first cousins (their respective fathers were brothers). They immigrated to Canada in 1908 via the port of Libau. Jacob was the second male (there were six brothers and four sisters) to emigrate. His brother, Josef, with wife Fenya, emigrated first, circa 1899, to Buenos Aires. The last to leave was Arkady, who emigrated with his Polish wife, Masha, post Great War / Russian revolution, to Paris in the mid '20's.

Prior to the Great War, Jacob and Eda were joined in Winnipeg by two of Eda's sisters and one of her brother's. After the Great War these three emigrated to Johannesburg, S.A. where four other siblings had settled. Jacob and Eda had planned to follow them, but were advised to remain in Canada. They had three daughters: Esther, Rose and Leah (Lily, my mother).

Leah's (Lily) early education was from the traditional / Yiddishist Peretz School. In addition she attended the secular Aberdeen public school. My father had only public schooling. He was a fine athlete, played various sports and was most fond of recalling his YMHA DAYS.

The Depression forced my parents to leave high school before completion. Mother began working in the needle trades. Dad joined Dominion Poultry. During the war he moved the family to Glenella, Manitoba, where he was involved in a creamery operation. Near the war's end, the family returned to Winnipeg and took up residence at 476 Alfred Ave. Mother was active in the Peretz School's Mutter Farein and Pioneer Women. Father's working hours were such that there was no time left for community involvement.

I was born on February 8, 1939, and Gary on October 8, 1940. We attended Peretz School as day students until moving 'north' to Cathedral Ave in 1948 (303 Cathedral Ave.) That meant attending Champlain Elementary, Machray Junior High and St. John's. I continued at Peretz School as an after school student. Many of my lifelong friendships were forged at Peretz School, reinforced at public school and at the YMHA, (where I proudly belonged to the Bisons.)

In Vancouver, father worked for Visco Poultry while mother was with the Hudson Bay Company. In the early '60's dad joined the Jewish Community Centre staff, where he remained until his death in 1978. Mother retired from the Bay after more than a decade of employment. She died, after a long illness, on October 22, 1993.

After high school graduation, I attended UBC, receiving my BA in English and History in 1961. The following year I spent four months in Israel at an Ulpan (Kibbutz Sarid). I returned to UBC in 1962 for a teacher's certificate and subsequently taught public school in Burnaby for 33 years. I never married.

Gary married Chris Norman and spent the bulk of his working life with Canada Post. Ill health led to his retirement in the early 90s and he died on November 17, 1997. They had no children. At the time of the Six Day War, June, 1967, Gary went to Israel as a volunteer.

And subsequent to that conflict, the fallout led to my becoming active in Hasbarah work with the Canada Israel Committee and the Public Affairs Department of Hadassah Wizo.

I retired from teaching in 1996 and increased leisure has allowed me more time for reading, gardening, travel, and language studies (Italian and Spanish).

In 1987, a fourth Scher branch — brother Aaron's wife, Bertha, - was serendipitously located in Moscow, USSR. All six members of that branch (four generations) emigrated to the USA in the early '90's. In 2004, the last 'unknown' Scher branch was located, again serendipitously, in Argentina (Buenos Aires and Bariloche).

I am pleased to sign the Endowment Book of Life to honour and memorialize the Scher and Lepkin families...

And, I do so in the spirit of these oft cited words: