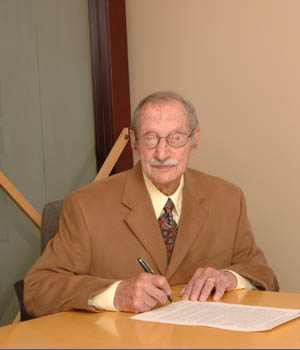 The wedding of Len and Frances

The synagogue in Pavolich where Len's briss took place on June 22, 1915

Len saying kaddish at the headstones of his grandparents in Pavolich

Len at cemetery in Pavolich

Although a World War is too expensive a price to pay, Len Barsky credits his war experiences for his introduction to all the positive possibilities that are available in the world.

Born in Pavolitch in the Ukraine in 1915, Len and his parents, Ben & Ethel (Schaeffer), traveled via The Komarno boat and arrived in Winnipeg in the summer of 1921, one day after the death of his paternal grandmother. Although Len was the eldest of three children - a sister Fay was eight years younger and brother Sid is 16 years younger - Len grew up very much as an only child. Len's memories of his childhood are of a family that made a living but hardly a life. Both his parents were hard working, honest but poor people who had little enjoyment or affection in their lives. Len's childhood memories are of attending Norquay & David Livingstone schools, learning to swear in English before he could speak English, and living with parents who were never able to demonstrate their feelings to their son.

Len left school early, got a job similar to his father's on Winnipeg's "fruit row" and saw his life falling into the same drudgery as his parents, when the Second World War broke out. Not wanting to wait until he was called upon, Len joined the Air Force, became a radar navigator, and quickly found himself stationed in England. It was there that he began to experience the highs and lows of what life had to offer. Running from theatres to air raid shelters during bombing raids on London, Len quickly began to appreciate the experiences that living a full life could bring. The war allowed Len to become "worldly". It was during the war that Len met his first wife, Dot, and was married by the Jewish chaplain. Len and Dot returned to Winnipeg in 1946 with their first of three children, Bernie.

After experiencing what was available in the wider world, Len wanted to provide for himself and his family a better style of living. Rather than spending his life on the fruit row Len started a career in life insurance. Len recalls that when he received his insurance license he felt that his life had unlimited possibilities. The opportunity to travel and meet people on a regular basis was offset by the reality that Dot was often left alone to raise Bernie and their two younger children, Barbara and Kim. In addition, Dot felt alone as she had no immediate family in Winnipeg. As the children grew and left Winnipeg, Len and Dot drifted apart and finally divorced in 1970.

Len often speaks about G-d having a special plan for him, his introduction to his second wife, Frances Wolch, is part of that plan. After a short courtship, Len and Frances married. Through his relationship with Frances he became involved in the Shaarey Zedek Synagogue, an affiliation that is still strong today and that solidified his Jewish identity. Discussions and relationships with a series of rabbis and traveling to Israel where he twice spent time in the army, have all worked to enhance Len's involvement as a contributing member of the Winnipeg Jewish community.

Len's community life has grown from being a young boy at the Pavolitch Synagogue on Dufferin to being extremely active at the Shaarey Zedek. He also is involved with the Lion's Club and is a student in Continuing Education at the University of Winnipeg - not bad for a man who never went to high school. Len is also a skilled speed skater, a talent that earned him an Order of Distinction.

One of the highlights of Len's life was an invitation to return to Kiev, Ukraine, in memory of the Pavolitch Jewish community that had immigrated to Winnipeg in the early part of the 20th century. He was impressed both with how he was received and the number of orthodox Jews practicing Judaism in the Ukraine today.

Len feels that G-d has tested him and that he has passed. He has contributed to and has earned the respect of members of the community for his efforts to assist people in their time of need through his synagogue activities. Leonard is thankful that he has positive relationships with his children in Toronto as well as with Frances' children. From an upbringing that provided only food and shelter he has learned the importance of including "heart" to make one's life complete. Today Len is looking forward to reaching his 91st (7 x 13) birthday for his next Bar Mitzvah.