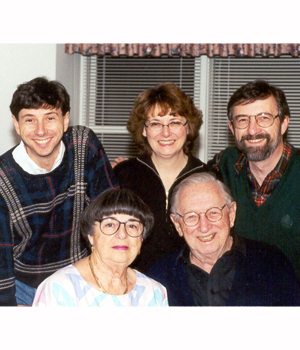 Esther and Lanny Remis with their children (L to R) Joel, Carla and Paul 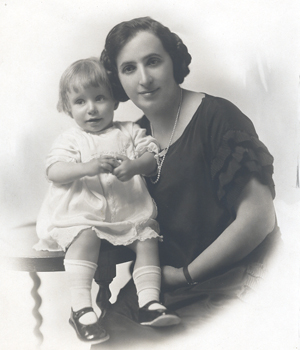 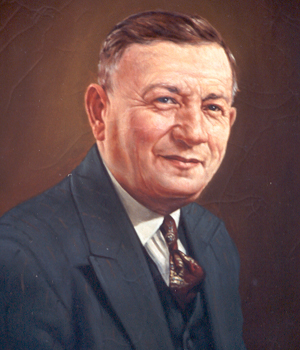 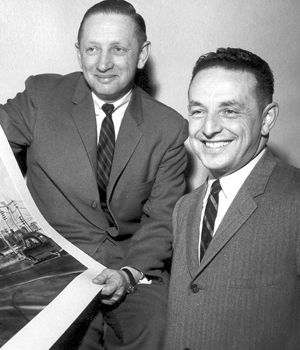 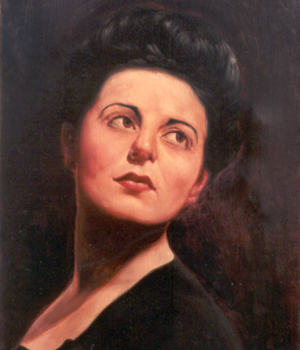 In seeking to express myself in the few words allotted to my entry in the Endowment Book of Life, I was struck by the thought that "You are your brother's keeper". Growing up with my brother, who was only separated from me by fourteen months, I have never known a day in which he did not play a significant role. We were also brought up to share all our possessions which we did all our lives. It was natural for me to accept a social philosophy which embraced the concept of sharing and reaching out to help others. It seems natural to contribute to the aims of the Jewish Community and for this reason, I have become a signatory in the Endowment Book of Life.

My father, Boris (Remisnitsky) Remis, left Russia to avoid the military draft in 1910. A year later he sent for my mother Betty and they were married in Winnipeg. I was born in 1912 and my brother Bernie was born a year later. Until his death in 1990, my brother and I remained very close. Nine years later my sister Gloria was born. My parents were both from Odessa, the cultural centre of the Ukraine. My father was a talented pictorial artist. My mother, on the other hand, was of a studious nature with intellectual curiosity. I like to think that I inherited the best qualities from each of them.

Unlike other immigrant families, my father had no difficulty in making a good living and always provided well for our family. We made the transition from apartment to duplex and eventually to our own home on Manitoba Avenue.

In April of 1940 I courted and won the hand of the beautiful, vivacious and talented Esther Shnier. The war years that followed were agonizing, but we managed to survive six long years of separations and uncertainties. In retrospect all we had then was our love and respect for each other and a willingness to endure together whatever life had to offer. I cannot believe that more than sixty years have gone by since we pledged our future together. Those were memorable days and are to be treasured in the book of life. Esther and I have three children: Paul (married to Maureen Briggs and living in Los Angeles, California), Carla (married to Ken Goldstein and living in Winnipeg), and Joel (married to Susan Sawyer and also living in Winnipeg). All three children benefited from a university education and have earned professional degrees. We have seven grandchildren, all of whom are pursuing educational goals. Esther and I recently celebrated our sixty-third wedding anniversary with love, pride and devotion.

Growing up in a Jewish milieu, the focus was secular rather than religious. I consider my attendance at the Arbeiter Ring Shule, where I gained a Yiddish education, of great significance. During my later university studies, those early years became of prime importance to the development of my social conscience. My intellectual interests were strongly influenced by the enlightenment movement. The examples set by my high school teacher, Moishe Bloshstein, have remained important to me all my life.

During my undergraduate university years, I developed a serious interest in journalism but was unable to pursue this as a career because of the Depression years, which limited the opportunities in this field. I eventually joined my father in the family business, Remis Signs Ltd.

My work in the advertising field was interrupted by six years of military service. In 1939 I enlisted as a gunner in the Royal Canadian Artillery and in 1943 gained an officer's commission. Back in Winnipeg after the war, my brother and I operated the family outdoor advertising company successfully until 1965, each bringing a special quality that complemented the other. We worked with our father until his retirement in 1946. We retained a close relationship with him throughout his life. He died in Vancouver at the age of 71 in 1961. My mother enjoyed a long life in Winnipeg surrounded by loving children and grandchildren. She died at the age of 82 in 1971.

My brother and I sold Remis Signs in 1965 and I found myself, at age 53, in a position to fulfill a lifelong dream to return to the University of Manitoba. Coincidentally my daughter, Carla, was pursuing her undergraduate degree.

With my educational credentials established, my business background solidified, and my belief that citizens are responsible for each other, I was well positioned to be a part of the first elected Socialist government in Manitoba. When the New Democratic Party (NDP) came to power in 1969, I was asked to take over the portfolio of Deputy Minister of Industry and Commerce. It was a challenge to become an integral part of the Manitoba Legislature, and I spent seven stimulating and productive years in government service. Then in 1977 I continued on a part-time assignment with the government, and officially retired in 1979. I then returned to the U of M and completed my Master of Arts Degree in 1981, with a special interest in Manitoba history.

While spending many winters in Palm Springs, California, I continued my interest in organizational activities by establishing the Canadian Club of the Desert in 1982, and serving as its president for many years.

My interest in continuing education led to the formation of the Thursday Afternoon Luncheon Group, held at the Glendale Country Club, which is now in its sixteenth year. Affectionately known as "Lanny's Group", this club allows thirty or so men to spend time together listening, learning and discussing issues of the day, so that the search for knowledge is not left wanting.

Other projects in retirement included both the editorship of the 50th Anniversary Publication for the Glendale Golf and Country Club and a study of health insurance, prepared for the Manitoba Society of Seniors.

Reflecting on my life, I see no contradiction in the non-religious, left-leaning, sports-minded, socialist background of a man who today has been a member of a synagogue and with his wife has raised his children in a Jewish tradition, who was president of the YMHA, president of the Glendale Golf and Country Club at a time when Jews were not accepted at other country clubs, and an ardent fundraiser for Israel in times of need.

I reconcile the above contradictions by recognizing that life is a matter of balance, of give and take. Be it in a marital relationship, negotiating a business deal, or a political arrangement, everything evolved human interactions and therefore an understanding of human needs — We truly are our brother's keeper.