Leo Meltzer, by his grandsons Arnold and Sheldon Glass 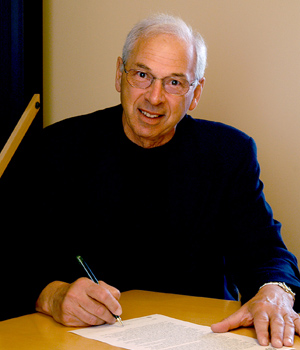 Arnold Glass signs the story of his grandfather, Leopold Meltzer 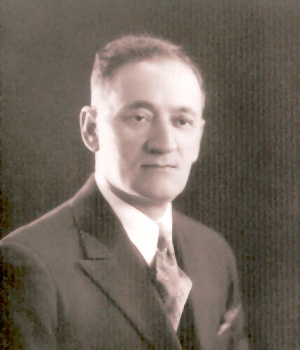 Leopold Meltzer and Sarah Goldstein on their engagement

Leopold & Sarah Meltzer and their children

Leo Meltzer was a man who never allowed hardship, change, or disappointment to affect his success in life. Beginning his working life as a child labouring in a distillery, he rose to become one of Winnipeg's leading manufacturers.

Leo was born in 1879 in Podbereze, on the banks of the Berezen River in Wilna, Poland. His father, Yeshia Meltzer, was a distiller and merchant-farmer. His mother, Rochelle, died when Leo was only eight years old.

After his mother's death, Leo was sent to study at cheder in a nearby town - the first journey he was to make in a lifetime of journeys and fresh starts. He later spent nine months in a Russian school in another small town, and then, at age 12, went to work in a distillery. Following that, he worked as a manufacturer's agent in Minsk, and then as a drug store apprentice in Kovoa, on the Lithuanian-German border.

From there, Leo traveled to London to join his older brother Israel in his shoe stitching business. Leo worked for Israel at four shillings ($1.00) a week, plus board and room for nearly two years. By the time Israel left for Canada, Leo had saved enough from this salary to buy the business, operating it successfully until the Boer War eliminated his overseas trade.

In June, 1903, shortly after standing in line at four in the morning to watch Queen Victoria's funeral, Leo crossed the Atlantic to join Israel on a homestead near Swan Lake, Manitoba. From there he moved to Winnipeg where he founded and operated a dairy. In Winnipeg he married Sarah Goldstein, daughter of Mr. and Mrs. Moses Goldstein, pioneer residents of Lowe Farm, Manitoba.

After marriage, Leo went into the grocery and furniture businesses, and then moved out to Lethbridge where he opened another furniture store. From there he moved to Snowflake, Manitoba to operate a general store.

In 1921 Leo returned to Winnipeg where he founded the Western Paper Box Company Limited on the corner of Selkirk and Charles. Over the years, Western Paper Box grew to become one of the largest box companies in Western Canada, employing five workers in 1921, and more than 70 at the height of its success. In time, Leo expanded the business to include the Zenith Printing Company, which also developed into one of the largest and most respected printing shops in the country.

Business was often difficult, but Leo managed to overcome the obstacles which stood in his way. Living by the motto, "If you've got to feed a family, you can't afford to be lazy," he was driven to succeed, - although never to the detriment of other people. He always operated clean and ethical businesses on sound principles, and in the end was successful, he believed, due to two main factors: patience and perseverance.