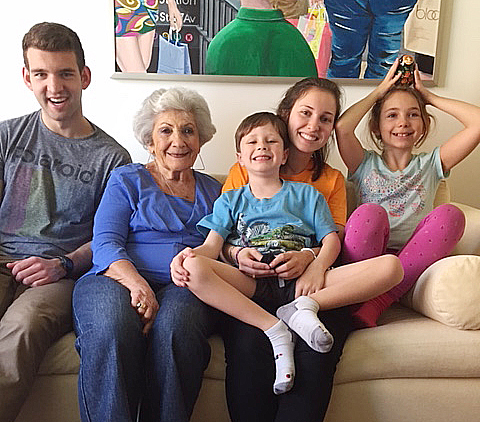 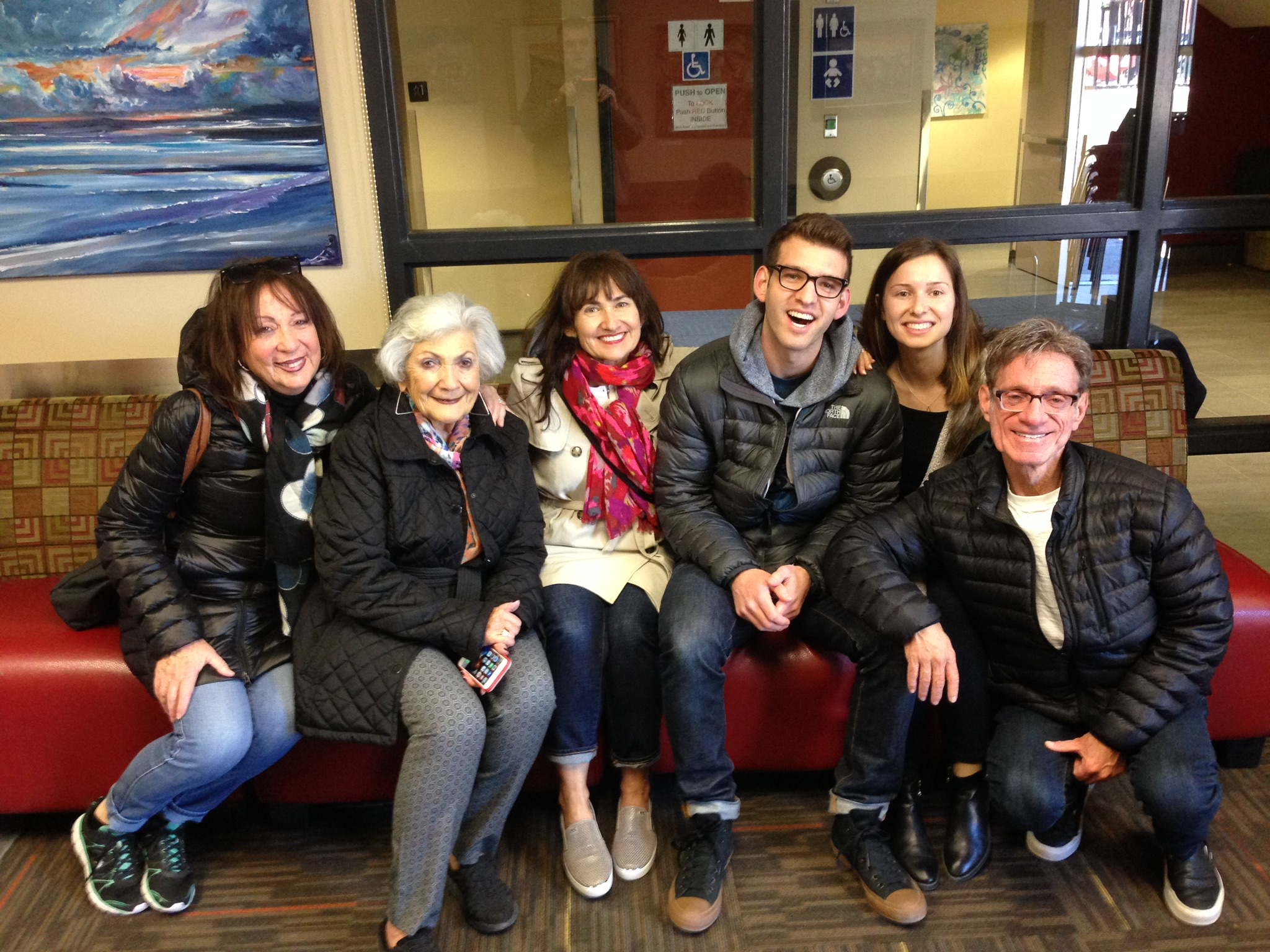 Lenore with her family 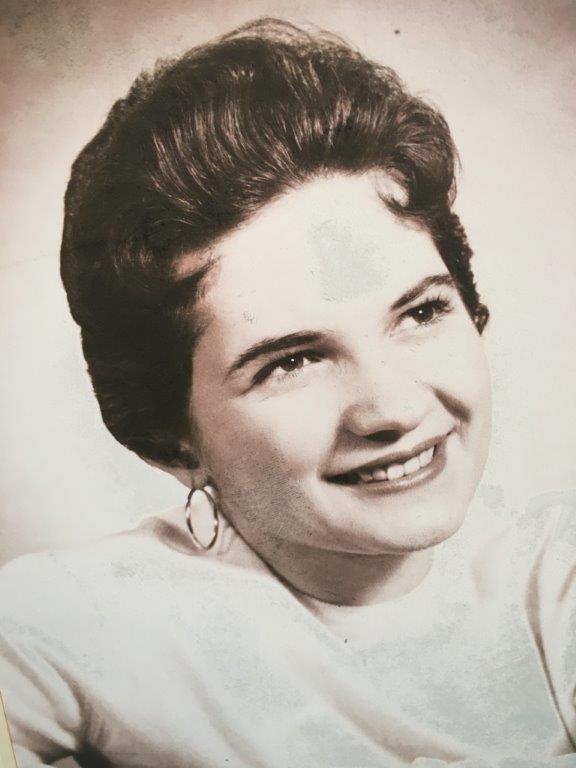 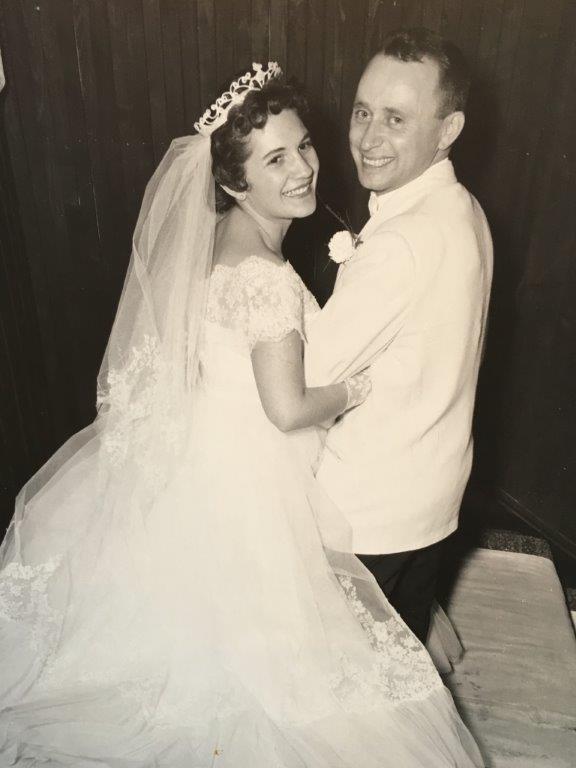 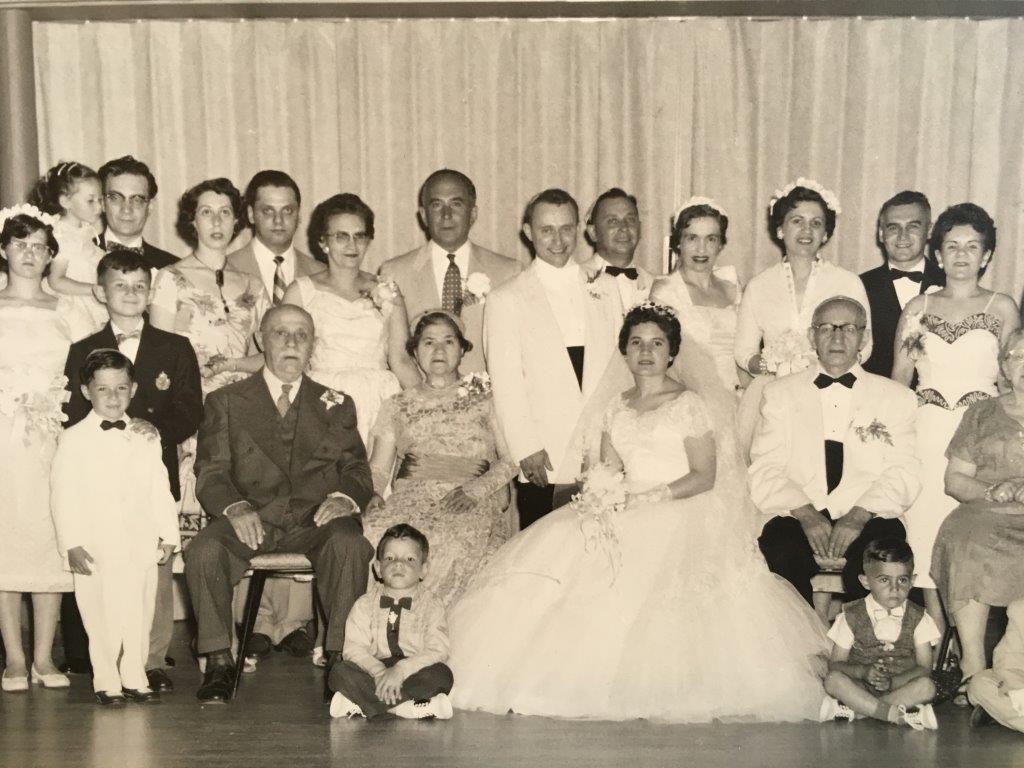 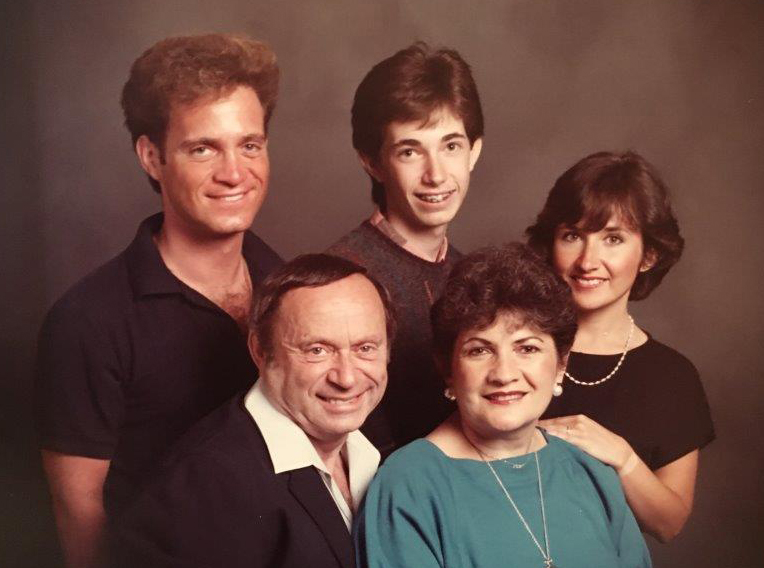 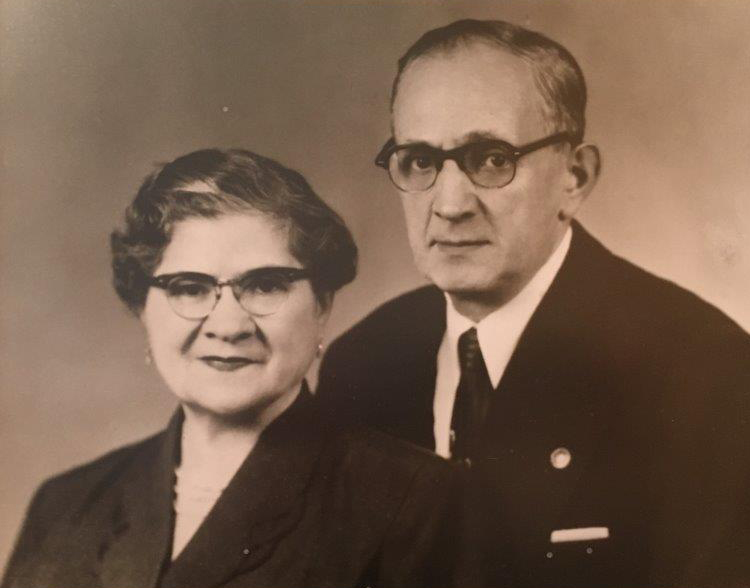 My father, Hershel (Harry) Fogelman, was a tailor. But, like so many others, he left his home and family in Lodz, Poland and came to Canada as a "farmer", with the dream of making a better life for his family. He worked hard and about a year later my mother, Dena (Goodman), and their four children — four-year-old twins Rebecca (Becky) and Sarah (Sheri), two-year-old Gertie, and baby Hymie (Hy) — were able to join him here. There was some last minute tension when little Hymie was discovered to have pinkeye, which would prevent him from being allowed to disembark, but a woman on board advised my mother on how to camouflage the condition, and they were all able to join my father in Winnipeg. I was born 12 years later, on April 7, 1937.

Our home was in Winnipeg's north end where many other Jewish families had settled. Since my siblings were so much older than me, I was raised almost as an only child, but our home was imbued with a sense of family and community and I made lifelong friends during my childhood days. I recall that at the age of four, still too young for school, I was so excited to start school that I ran away from home and joined friends attending the small Talmud Torah on Andrews Street. But when I was finally old enough to attend Hebrew evening classes, I hated them! I switched to the Peretz Shul, which was even worse and so went back to the Talmud Torah. I enjoyed public school much more — William Whyte Elementary and St. John's High School, followed by Success Business College.

After high school I worked for a short time in an office. At the YMHA on Hargrave Street I met Simon Kagan, who had come to Winnipeg from Europe at the age of 18 with the help of Jewish Immigrant Aid Services (JIAS).

Simon was born in Mir, Poland in 1930. In 1939 the Russians occupied his town, and two years later, when Simon was 12, the Germans moved in. On November 9, 1941, the Germans massacred approximately 1650 people in one day, including Simon's parents. 850 surviving townspeople, including Simon and several of his sisters, were moved to an old destroyed castle once owned by the Radjivil family. With the help of the German Chief of Police who, unknown to the Germans, was a Jew, the Ghetto residents were tipped off about a liquidation that was to happen on August 13, 1942. Some were able to escape. Simon's sister pushed him from a window and he jumped to safety. He survived the Holocaust; his parents and four of his seven older sisters had not. One of his sisters had moved to Israel (Palestine) before the war. He wanted to go there too after the war, but couldn't. He came to Canada instead. Simon and I were married on June 3, 1956.

Volunteerism has also been a way of life for me. I was very active in Canadian Hadassah-WIZO including many years as President of our local chapter and I also served as National Vice President. I enjoyed planning and managing the many events and activities. I served on the inaugural Board of the Seven Oaks Hospital and chaired the north end/Garden City area door-to-door canvassing for the Kidney Foundation of Manitoba.

Simon and I, with two of our children and a nephew, were able to visit Mir and see the castle and the town that were his past. The mass graves had markers, written in Russian, which indicated Russians were buried there. On the fiftieth anniversary of the liquidation of the Ghetto in Mir, after the iron curtain had come down, Simon went back a second time with others from his home town, to change the tombstones on the four mass graves; stone plaques written in Hebrew and Byelorussian provided the facts about the approximately 2200 Jewish people were buried there.

Simon passed away in 1993. He would have loved to have known our children as adults and especially also our grandchildren. Mark followed in his father's footsteps and today is a department manager at Best Western Winnipeg West. Nikki is a lawyer in Winnipeg. She and her husband Elliott Garfinkel have two children: Mikaela (named after Simon's sister Mira), born in 1992, and Simon, who is named after his late grandfather, born in 1995. Our youngest Hershel is a physician in Ottawa. He and his husband Jerry Ritt have two children, Miriam (Mimi) born in 2006 and Nathaniel born in 2010. I am excited that these grandchildren come to Camp Massad every summer! This gives all my children and grandchildren an opportunity to join me, spending time together at Winnipeg Beach.

Over the years I have volunteered in many capacities and even today my life includes volunteering at the St. Boniface Hospital emergency room, Operation Ezra teaching English to Yazidi immigrants, cooking for after-service meals at the Winnipeg Beach Synagogue, Christmas Cheer Board, Operation Red Nose, and helping out at the Asper Jewish Community Campus for activities such as Folklorama, Winnipeg Jewish Theatre and the Jazz Festival. Besides volunteering, I enjoy my synagogue life, playing panguini, going to the Rehfit Centre, doing jigsaw puzzles, and needlepoint — I have needlepointed tallit bags for each of my four grandchildren. I also enjoy time at our family cottage at Winnipeg Beach, a cottage that has a long history in our family as my mother ran it as a rooming cottage many years ago. I appreciate my many wonderful friendships, some from my earliest childhood. There are others who through a variety of circumstances or connections, we have considered family. I treasure each one. My life is richly blessed with the love of many and I am grateful.