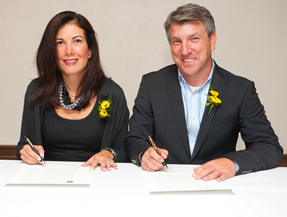 Laura Lomow signs her story for the Endowment Book of Life

I've chosen Winnipeg and I've chosen Judaism— and I couldn't be happier! From cultural, spiritual, intellectual, and community perspectives, Judaism simply makes sense to me. I am proud to be an active member of this community.

I am also proud of the wonderful childhood I had in British Columbia. I was born in Prince George in 1968 to Stephen and Lorna Goudy (née Willsie). We spent some time in Vancouver as well, but were pretty settled back in Prince George by the time I was in grade six. It was a fun and outdoorsy childhood. We lived just outside town on the shores of West Lake. I would often waterski with my friends before school, and I used to go snowmobiling in the winter. I also studied martial arts and took part in competitions. My parents were hard-working and wonderful role models for my brother Greg and me. My dad owned a small trucking company and my mother worked for 30 years at Sears. Today they are retired in the Okanagan.

While life in B.C. was beautiful, I decided to leave and explore my horizons as soon as I was finished in high school. I went to Calgary to study at the University of Calgary for a while, returned to B.C., and then went to Europe for a year. It was an incredible and eye-opening experience; I visited 18 countries and took part in judo in Turkey. I returned to B.C. to study at Simon Fraser University and then came back to Prince George. It was while in Prince George in 1994 that I met Mark Lomow, who had been transferred there.

We began dating and soon realized we wanted a future together. I was working with American Express Travel at the time and we both managed to secure transfers to Toronto. We were looking for more stability and an opportunity to control our own destiny. In Toronto, I started to get very serious about becoming Jewish. I loved the life Mark had and wanted to learn more about Jewish living. I started with some independent study, and read about 40 books about Jewish history, religion, culture, and ethics. Choosing to convert was the logical next step; Judaism felt so right to me.

I found a rabbi in Toronto and began studying with him weekly for a year. At the end of my formal study, I travelled to Israel and then came back to Toronto for a dip in the mikvah. It was one of the most beautiful and profound experiences of my life. My Christian parents proudly accepted my choice, but complained that it was difficult to find a "Happy Pesach" card in Prince George.

Mark and I got married in Winnipeg in 1997, returned to Oshawa where we were living at the time, and then settled enthusiastically in Winnipeg. My early years in the city were outstanding. I made new friends and refuelled after years of moving around. I decided to return to the working world and helped Mark at his young business, Lomow Financial Services. Today, I am president of AQ Group Solutions, an independent company we launched together.

Mark and I have three incredible children: our daughter Jordan is at the University of Winnipeg; our son Brendan is at River Heights; and our son Adam is at Brock Corydon. We are so proud of them, and know that they will do great things throughout their lives.

I am an active volunteer and hope that my passion and interest for making this community and our world a better place will inspire our children to find causes that motivate them to contribute in a meaningful way.

As a volunteer, I sit on the Board of Directors of the Jewish Foundation of Manitoba and serve on the Women's Endowment Fund Committee; I'm on the Board of Directors of Winnipeg Harvest; and I am an officer and co-founder of More Than Shoes, a new charity in Winnipeg that aims to provide shoes and boots to children in need. I am inspired by causes that truly improve people's lives, and I am proud to share my enthusiasm for philanthropy and social action with others.

I have what I like to call a "carry your own bags" philosophy. In life, you have to jump in and take responsibility. You have to give. You have to contribute. It's our generation's responsibility to make sure that our kids are grounded and thoughtful about their participation in the community. I believe that the Endowment Book of Life program sets a great example for them while building a solid foundation for our community's future.