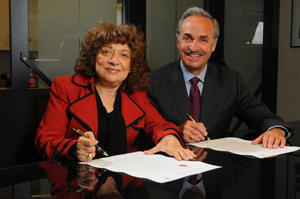 Larry Vickar signs his story for the Endowment Book of Life

I have always seen community service as a responsibility, not as a burden. And I can say unequivocally that it's a responsibility that brings me enormous pleasure. Whether I'm helping an organization in the Jewish community, or supporting another group working to improve people's lives, I learn, I grow, and I connect with remarkable people.

The value of community service and giving back is something I learned from my parents, Norman and Florence Vickar (née Zeitlin). My paternal grandparents were Sam and Gertrude Vickar (née Gelman). Sam was born in Lithuania; Gertrude in Russia. My maternal grandparents were Aaron and Rebecca Zeitlin (née Bass). Aaron was born in White Russia; Rebecca was born in Ukraine. I was born in 1949 in Melfort, Saskatchewan, and was raised with two siblings: Faye (married to Joel Lazer); and Reva (married to Alan Micflikier). My parents were very involved in community life in Saskatchewan until they moved to Winnipeg in 1983, where they continue to live today. Among other activities and achievements, my father was a member of the Saskatchewan legislature and a provincial cabinet minister. In fact, he was the province's first Jewish cabinet minister.

I had a wonderful childhood in Melfort. I was a Cub Scout and a Boy Scout, and I curled, skated, played saxophone in the school band, and swam, eventually earning my Red Cross certification and lifeguarding in Saskatoon. Life was simple, with good friends and a lot of sports. Melfort was also a nice place to be Jewish. There were a number of Jewish families there when I was growing up and we had a remarkable teacher named Herman Malherman, a Holocaust survivor who had made his way to northeastern Saskatchewan. He taught me Torah and trained me for my Bar Mitzvah. He also instilled within me a curiosity about Judaism and the world that still inspires me. To this day, I study regularly with a local rabbi. In Saskatchewan I was involved with BBYO, and my summers were spent at Camp BB Pine Lake, Alberta.

I moved to Winnipeg in 1967 after high school to further my education. I wanted to get involved with the community right away so I got a job at the old YMHA leading a boys' club and also joined the Winnipeg Organization of Jewish Youth. It was at a WOJY program — bowling at Roxy Lanes — where I met a young woman named Tova Superman. I offered her a ride home on a chilly night. She became my wife in 1971 when we married at the Rosh Pina Synagogue. Tova has been my greatest fan and advisor, and we enjoy a beautiful life together.

After arriving in Winnipeg and completing business school, I had a travel bug and devoted seven months to a world trip that included three months in Israel. I worked in the cotton fields and in the orchards on a kibbutz; and toured the country extensively. It was that first trip that launched my love affair with the State of Israel and I care deeply for its well-being.

When I returned to Winnipeg, I was ready to start working in the automotive business where my Uncle Ed was achieving success. He invited me to come work for him which was a huge honour and the start of my continuing career in the industry.

At Community Chev Olds on Main and Redwood I worked as the Assistant Time Sales Manager (finance) and then as the Credit Manager. I also did commission sales for seven years as I was starting my family. Commission sales work was frightening, but I did well and I loved it. Tova and I moved from an apartment on Main and Enniskillen to a house in Garden City as our boys were born: Sam in 1974; Stephen in 1977. In 1981 we moved to our current home in Tuxedo.

My role in the business grew and today I am the President of Vickar Community Chevrolet and I lead the Vickar Automotive Group. I have the pleasure of working with my wife and sons, and the privilege of meeting many wonderful people every day. I take special pride in the close relationships Tova and I have developed with many communities in Winnipeg. I've been to the Philippines on a mission and through my involvement with the Rotary Club in Winnipeg and a Filipino charity (ANCOP — Answering the Cries of the Poor), I played a role in building a village from scratch for people who would otherwise be homeless. The village and its multi-purpose hall are named for our family.

I also take a great interest in the work of L'Arche, a group that runs six homes in Transcona to promote independent living for intellectually disabled adults. The organization also runs a 47-seat restaurant in Transcona where many of the residents work; it's known as L'Arche Tova Café. I also have the pleasure of serving on the board of the St. Boniface Hospital Foundation and the Manitoba Hydro-Electric Board.

When I do work in the general community, or contribute financially, I wear my Judaism on my sleeve. It is through a Jewish lens that I do what I do. I'm inspired by my Judaism to try and make a difference. One of my proudest experiences was bringing a number of Filipino community leaders to Israel in 2006 when Tova and I led a mission.

In the Jewish community, I have been active with many different organizations, including the Jewish Federation of Winnipeg, the Jewish National Fund, and, at the time of writing, I serve on the Executive Committee of the Jewish Foundation of Manitoba.

My life is full and wonderful. I love my work and am proud of the business I continue to build, and I sincerely enjoy the community work I do. Above all, I savour the time I spend with Tova, with our boys, and with our young grandsons, Mason and Vaughn.

My participation in the Endowment Book of Life is one way of expressing my pride in our community and my enthusiasm for its potential. With strong institutions, great people, and a shared sense of commitment, our community will excel.