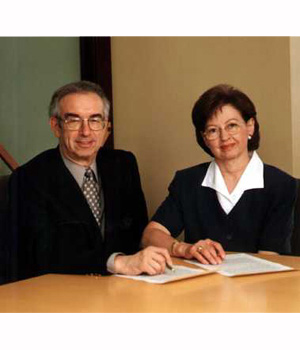 My father, Bert Hurtig, emigrated from Romania around 1900. He was the youngest of eight children. My mother, Rae Lauer, moved from Montreal as a child. She had two brothers and two sisters. My parents, Rae and Bert were married in 1932. I was born in 1937 and have one sister, Doreen.

My father worked as a telegrapher and station agent in Pleasantdale, Saskatchewan, where I spent the first six years of my life. My family then moved to Fort William (now Thunder Bay) where my father operated the Empire Hotel. I attended school there including Hebrew night school. The Jewish Community, of approximately 400 people, was very close-knit and we made lifelong friendships.

In 1952, at the age of 15, I contracted Polio and spent four months in the Children's' Hospital in Winnipeg. I went home and through exercise and my mother's and my determination, I learned how to walk again without supports.

At 19, I moved to Winnipeg to study Chartered Accountancy, graduating in 1962. I opened my own practice and then joined a national firm as a partner. Twenty years later, I left public practice and entered the real estate business and now operate a property and asset management company.

Roberta and I married in 1963. We have two sons, Bradley and Jack — who is married to Lori Mason, and a daughter, Renee, who lives with her husband, Ari Zaionz and son, Noah, in Toronto.

I have had the pleasure of being very involved in the Jewish and general community over the last 30 years. I was a founding member and Past President of Shalom Residences Inc.

I also had the pleasure of being on the Board and then President of the Jewish Federation of Winnipeg/Combined Jewish Appeal when the Campus opened (1997-1999).

I travelled to Argentina in 1995 to encourage Jewish immigration to Winnipeg. Through this opportunity, I have had the pleasure and privilege of forging new friendships with these new members of our Community.

I have also served on Boards of the Jewish Foundation, Jewish Child and Family Services, Talmud Torah, B'nai Brith, the Executive of the Jewish Federation of Canada and the Asper Jewish Community Campus.

In the general community, I was President of Estate Planning Council of Winnipeg, Versatech Charitable Foundation, D.A.S.C.H. (Direct Action Support for Community Homes) and have served on various other non-profit Boards in various capacities and spoken at various professional conferences.

It has always been important to Roberta and myself to be active in the Community, to keep a Jewish home and to support Israel. We believe that Winnipeg's Jews are fortunate to live in such a caring close-knit community and we have every confidence that we will continue to go from strength to strength.