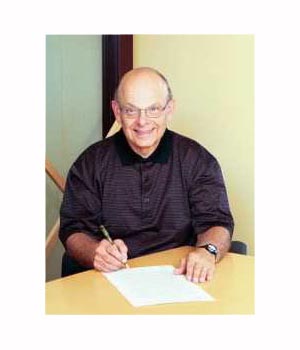 Larry Hecht signs his story for the Endowment Book of Life 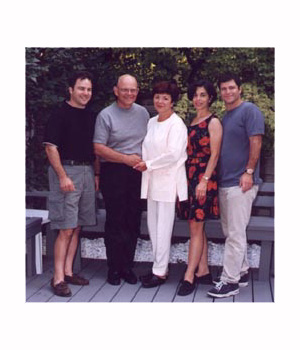 My grandfather, Jacob Hyman Hecht was born in 1890 in Poland. He resettled in New York and married my grandmother Bessie. My father Archie was born in 1912, and four years later they moved to Winnipeg where my two aunts, Edith (Lyons) and Anne (Kasow) were born. Hymie went to work in the fur industry as a foreman for Elias Reich, which he subsequently purchased in the 1930's and set up as J.H. Hecht & Son.

Archie Hecht, my father, graduated from the University of Manitoba and entered the family business. In February 1937 he married Ida (Diddles) Medovy, daughter of Israel and Molly Medovy. Israel Medovy was born in Russia, and came to Winnipeg in 1902 where he worked in the feed and flour business. She had two siblings, Harry and Marion (Knelman). After she graduated from the U of M, my mother worked as an assistant in Harry's Pediatric medical practice.

I was born on December 30, 1938. My sisters Louise (Claman) and Peggy (Bloom) and I grew up in River Heights. I attended Gordon Bell High School, the University of Manitoba and Hamline University in Minnesota. In 1960 I entered the family fur business. On May 28, 1961 I married a "north end girl ", Evelyn Malian, and we began to raise our family. We were blessed with three children, Benji, Jody and Paul, and now with four grandchildren.

I built a successful career in the fur industry. J.H.Hecht & Son became one of Canada's largest fur manufacturers, exporting finished product all over the world until 1990.We had several factories including one at 361 York (now the site of the Convention Centre) and 329 Cumberland (now reconfigured as "Designer's Walk"). Currently, I am involved in managing my real estate investments. I am grateful that I can be of help to my aging parents and am able to experience the joy of being a grandfather to our four delightful grandchildren.

Our parents always stressed the importance of education, and we in turn tried to provide our children with both formal and informal educational opportunities. All three children attended JWC and studied in Israel. We have wonderful memories of our visits to Israel during those times.

Summers spent at our cottage at West Hawk Lake are remembered with great fondness. For more than forty years we have experienced many special times with our parents, our children, extended family and friends. There I take time to pursue my passionate interest in cars, boats, and amateur radio.

We have been an integral part of the community for decades. I am a third generation member of the Shaarey Zedek Synagogue. We have been members of the YMHA/Rady Centre for four generations. I followed the example of community service set by my father and grandfather when as a young father I became active in the Talmud Torah, and later the Masonic Order. I have been a canvasser for the Combined Jewish Appeal for many years and currently serve as Chair of the Redemption Committee. I enjoyed being a member of the Board of the YMHA and served as its president from 1993/1994.I am a member of the Board of the Va'ad Ha'ir. I like my volunteer service in the Downtown Biz Association.

The Jewish community has been an integral part of my life. I believe that we must take responsibility for its future and would like to see expanded opportunities for learning and living that can engage young people and help them to appreciate the joys of "being Jewish". I hope Evelyn and I will be granted the strength and years to assist in strengthening our community for future generations.