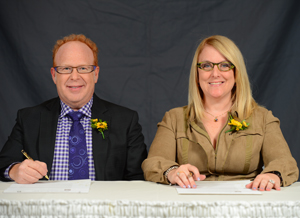 Lara Rykiss signs her story for the Endowment Book of Life

Through my involvement with Jewish organizations, three trips to Israel (so far), and the example set by my parents, I feel a deep connection to Jewish community, Jewish values, and Jewish faith. I am proud to be so immersed and engaged in community life.

I was born in 1968 in Ottawa where my parents, Jack and Belva London (née Weisz), had temporarily relocated. We returned to Winnipeg as a family in 1969.

My Dad was born in Winnipeg in 1943 to Louis and Mary London. My grandfather Louis, whom I never knew, came to Canada from Bialystok, Poland, in 1925. My Grandma Mary arrived from Volkovysk, Poland, in 1928. They each came to escape anti-Semitism and seek a better life. They opened and ran the Playland arcade in Winnipeg Beach — I always thought that was very cool. I was very close to my Grandma Mary. My sister Rebecca and I slept over at her apartment on countless weekends, and if we didn't sleep over, we walked over on Sunday mornings to be spoiled by her while our parents slept.

My mom was born in Winnipeg in 1944 to Eugene and Jean Weisz. Grandpa Eugene came from Olcsva, Bereg Megye, Hungary, in 1928; Grandma Jean came over as an infant from Vitebsk, Belarus, in 1913. Like my paternal grandparents, Eugene and Jean came to Canada to get away from anti-Semitism and to build a better life. We had Shabbat dinner frequently at Grandma and Grandpa's home — my Grandma was a terrific cook. They were both active at Shaarey Zedek Synagogue. (I remember that my sister and I usually won the costume contests at the synagogue's Purim Carnival, probably because Grandpa Eugene was a judge!)

Rebecca and I had a beautiful and colourful childhood. We were mostly in Winnipeg, but also spent a year in Boston when my Dad was working on his Master's degree, and a year in the south of France when my Dad was on sabbatical. That year in France, when I was 10-years-old, is one of the most vivid memories of my childhood. We bought a Volkswagen with a pop-up roof in Holland and over the year, we camped throughout Europe when we weren't in school. By the end of the year, we had visited 10 countries. That year was an incredible gift — and my sister and I loved being the only Anglophones at Ecole Puyricard!

In Winnipeg, my parents have set a beautiful example of community service and professional excellence. My Mom worked as an interior designer and taught at the University of Manitoba for 25 years. My Dad is an accomplished lawyer and also served as the Dean of Law at the University of Manitoba for four years. My Dad has been an active volunteer with numerous Jewish and professional organizations. My Mom, too, has been an active volunteer over the years, and was especially active campaigning against nuclear weapons.

In Winnipeg, I attended Children's House Montessori, Sacre Coeur, River Heights, and Kelvin. One of my fondest memories was appearing in musicals at River Heights Junior High. For my formal Jewish education, I attended Ramah Sunday School and Herzlia Night School three times a week. We weren't especially observant while I was growing up, but Shabbat dinner was an important tradition for us, as were celebrations for all of the major Jewish holidays. I also found myself very active in Kadima and USY at Shaarey Zedek, and was active in B'nai Brith Youth Organization and National Conference of Synagogue Youth, too. I was even President of the north end chapter of NCSY, pretty strange considering I lived across town and wasn't especially observant! I was drawn to the group by great friends and the desire to be part of something really special. Another place that has been really special for me is B'nai Brith Camp. My summers on Town Island were rich and rewarding — the camp holds a special place in my heart.

After high school, I went to the University of Manitoba where I earned a Bachelor of Arts (Hons.) degree in religious studies, focusing on biblical studies. I was fascinated by my education, and studying religion at the U of M brought me even closer to my Judaism.

At my own surprise 18th birthday party, I met Les Rykiss. We were introduced by a mutual friend. We started to date and got married in 1992 at Shaarey Zedek. We have two wonderful children: Michaela (born in 1999) and Jaron (born in 2001). Our children bring me great joy. I enjoy the time we spend as a family, and I enjoy the one-on-one time Les and I have with the kids. We do our best to teach them to respect others and to work hard to achieve their goals. And I hope that they, like me, will take an interest in serving their community.

Over the years, I've had some wonderful professional positions. Today I am proud to work at the Manitoba Chapter of the Canadian Hemophilia Society, and I also help my Mom out with her Belva London Weatherwall business, a provider of three-season sunrooms. I've been an active volunteer with BB Camp, Shaarey Zedek, and the Gray Academy of Jewish Education, where my kids go to school.

Whether standing at the Kotel with my daughter, attending synagogue, reading a Jewish book, sitting down to Shabbat dinner, or simply reflecting on my values, I feel Jewish through and through. I hope that my children will share that passion for Judaism and for the community throughout their lives.

I also hope that with their pride in Jewish life, they will also share my zeal for justice and equality — the very real and sincere belief that all people are equal and that everyone deserves respect regardless of their background and station in life.

By participating in the Jewish Foundation of Manitoba's Endowment Book of Life, I hope that I can play even a small role in building an even stronger community in the future. A strong community will benefit my children, their children, and, indeed, all of us.