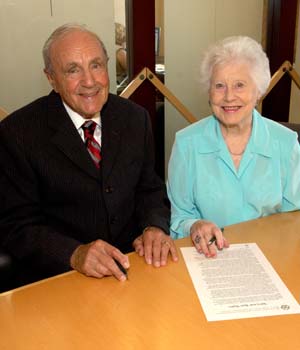 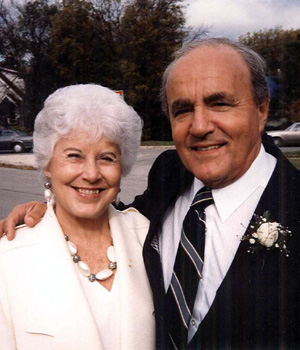 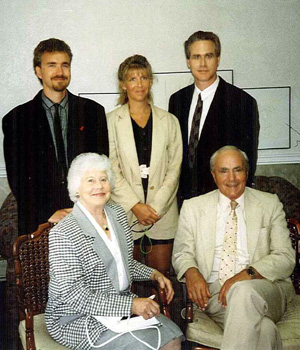 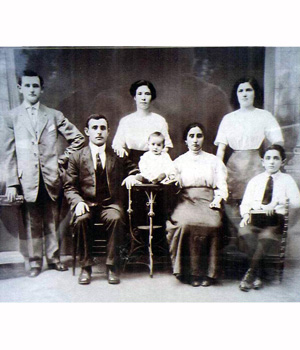 Dr. Rubin's father, Harry Rubin is on the left together with other family members 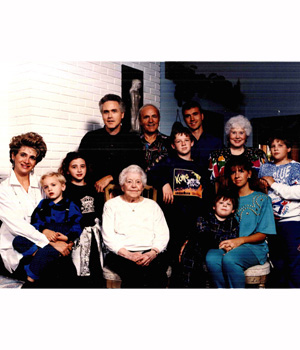 My name is Leon Rubin. I was born in Winnipeg on October 3, 1922. My parents were Harry and Jean Rubin (nee Levene). Both were born in Russia and immigrated to Canada; my mother via London, England and my father via New York, USA. The second eldest in his family, my father arrived in the US in 1910 at age 18 and, within a few years, brought his mother and siblings to America. The family name was Serbin, but as a result of a passport switch to avoid conscription in the Czar's army, he was left with the name Rubin.

My mother's family's first destination in Canada was the town of Rosthern, Saskatchewan. On arrival they were met by the family of Mendel Lyons, whose son Ruvin became my partner in medical practice. My mother often remembered how excited she was as a very young girl on seeing the table laden with fresh fruit. Fresh fruit was a rare delicacy for the family. They later moved to Winnipeg where my grandfather was in the cattle and meat business. Their names were David and Rachel Levene. They and my great grandparents were orthodox and followers of the much revered 'Tzadik,' the 'Gitter Yid.' His home on Boyd and Salter served as a chapel and I later had my Bar Mitzvah there. My father's family remained in New York. We have remained in contact with them over the years and see them at family simchas. They retained the name Serbin, and many of them now reside in Phoenix.

My father was in the retail shoe business all his life. He died at the very young age of 39. As I was only 12 at the time, I remember him only as a devoted husband and father. He and the New York side of the family were ardent Zionists — if not for his untimely death I would have had my Bar Mitzvah in Jerusalem. This is in the nineteen thirties! My mother never remarried and raised three young boys by herself. All three of us became doctors. She was active in the Deborah Chapter of Hadassah.

I grew up on Machray Street in Winnipeg's north end and attended Champlain, Machray and St. John's Tech. Machray Street was home to many Jewish families and so I grew up in a Jewish milieu. Like most boys, we were interested in sports and formed a club called the Demons to compete with other groups in football and hockey. Except for the sweaters, which were our own, our football equipment were discards from the YMHA Junior Team. I was active at the Y as well, mostly in sports and debating. I am the oldest of three brothers. Jack is a retired otolaryngologist and still resides in Winnipeg. Manley is a retired dermatologist and resides in Minneapolis.

I married Lainy Black (Vaun Lorraine Black) in Winnipeg on June 7, 1948. The wedding took place at the Royal Alexandra Hotel. Lainy is a registered nurse. We met on the labour floor of the old Winnipeg General Hospital, now the Women's Pavilion of the Health Science Centre, over the outstretched legs of a woman having her baby. Lainy was a student nurse and I was a resident in obstetrics and gynecology. Lainy was not born Jewish but converted to Judaism before we married. She is an avid and very talented painter, and has been active in several Jewish organizations. She served as president of the Israeli chapter of Hadassah and vice chairman of the Winnipeg chapter of National Council of Jewish Women. As a 10 year volunteer at the Golden Age Club (now Gwen Secter) she was honoured with a special award. The Royal Winnipeg Ballet was another one of her interests and she also served on its board. After our children were grown she was employed by Victorian Order of Nurses for several years.

I obtained my medical degree from the University of Manitoba in 1945 and was awarded the gold medal for the highest standing in obstetrics and gynecology. After graduation I joined the Canadian Army Medical Corps, reaching the rank of captain. After discharge from the army I completed a residency in obstetrics and gynecology at the Winnipeg General Hospital, now the Health Science Centre. On completion of my training, Lainy and I moved to Rivers, Manitoba, where for more than three years I practiced general medicine. I then obtained my specialist degree and we relocated to Winnipeg where, for a time, I engaged in a solo practice and the joined the Mall Medical Group. There I practiced my specialty of obstetrics and gynecology for more than 40 years. When that group disbanded I continued working for another 10 years in association with Dr. Phil Barnes.

In the course of my career I obtained my MD, LMCC, FRCS© and FRCOG. I have been active with the Royal Winnipeg Ballet, serving on its board for 26 years, including two years as president of the Board of Directors. For a number of years I enjoyed an association with the Jewish Historical Society and its successor, the Jewish Heritage Centre, serving on its executive. I remain on its Honorary Council. Lainy and I are members of the Shaarey Zedek Synagogue and Glendale Country Club. Over the years I also have pursued the hobbies of sculpting, writing, bridge and golf.