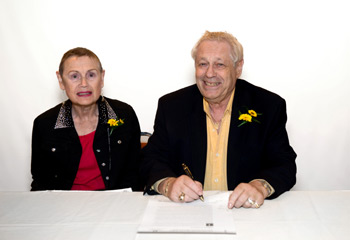 Kenny Kronson signs his story for the Endowment Book of Life

I've always said that if I hadn't played sports as a kid, I would have gotten myself into a lot of trouble. Not only did sports keep me focused, sports paved the way for a lifetime of community service that I continue to enjoy immensely.

I was born in Winnipeg in 1940 to Phillip and Jesse (née Ludwig) Kronson, both of whom were also born in Winnipeg. My father's parents were Julius and Annie (née Safrin). Julius came from Vilnius (Lithuania); Annie from Vienna. I never knew my grandmother, but was very close to my grandfather. He arrived on Ellis Island in 1867 and made his way to Minneapolis after stops in Pennsylvania (where he was a miner) and Alexandria, Minnesota. He then moved to Winnipeg and then Gimli, where he lived for 20 years. By leaving Minnesota when he did, it's said that he missed the arrival of Jesse James by a mere week.

My mother's parents were Morris and Gasha (née Cohen) Ludwig. Morris came from Yenem in Russia and his ancestry has been traced back 12 generations through cemeteries in Russia, Ukraine, and Germany. My mother came from Propoisk in Belarus. They came to Winnipeg around the turn of the century and it's believed that they met on the boat and married when they arrived.

My own parents met at a fraternity party and married in 1936. My father, a pharmacist, opened Salter Drugs in 1932. I credit him for my interest in becoming a pharmacist and also for my interest in sports. I remember that we had season tickets for the Blue Bombers from 1952 on; and I recall a special moment in 1948 when my father took me to a Bomber-Stampeder game at Osborne Stadium. My Uncle, Rube Ludwig, played for Calgary and I went with my father to the Calgary dressing room after the game. There, I met Woody Strode, a star player who later became an award-winning actor. Strode came to my grandmother's house that night for dinner. It was all very exciting for an eight-year-old sports fan. My father passed away in 1985.

My mother, who was known to her friends as Jay, was a wonderful woman, who, after a long life, passed away in the summer of 2013 — strong, sharp, and independent until the age of 101. She was the proud holder of a Bachelor of Arts degree from Wesley College, an outstanding cook, and a loving woman who was passionate about family.

My parents raised my brother, Paul, and me in the North End — although we escaped the city for a while and moved to Gimli, my father's hometown, during the 1950 flood. We spent our summers in Gimli, too, where I was a member of the Gimli Summer Club, and later, a swimming instructor. In Winnipeg, I went to Champlain, Machray, and St. John's High School, and had private lessons for my Bar Mitzvah, which was held at Shaarey Zedek. My childhood was mostly flavoured by sports — I loved watching and I loved playing.

I was a member of the Comets club at the YMHA where I played basketball and went swimming (I still swim at the Rady JCC). I played varsity basketball and football and ran track in high school, and continued to play intramural football for the pharmacy faculty team at the University of Manitoba. I earned my Bachelor of Science and Pharmacy degrees at the U of M and went to work for a number of different pharmacies. I enjoyed my career as a pharmacist, which included 11 years as the General Manager of Metro Drugs, and nearly 30 years as the President of MediMart Pharmacy and Homecare Supplies.

I married Barbara Kalos of Minneapolis in 1965 and we had two children: Jeff, married to Jean, and father to Mia, Gabriel, and Aaron; and Sari Kuczynski, married to Wojtek. Jeff is a vascular surgeon near Los Angeles; Sari is a medical assistant in Phoenix. Barbara and I were together for seven years; I am proud of the children we raised.

In 2011, I married Johanna Schindle after dating for 30 years. We've enjoyed beautiful years together, and although her health is now compromised, I celebrate being by her side.

Over the years, I have taken immense pleasure and pride in my community service. It all started around 1971 when my friends and I went to the Y to play basketball. We couldn't find a single ball to play with. At the time, we all chipped in to buy new basketballs, but I realized that for the Y to be successful for the long-term, it needed more funding. Shortly after that, the Y Sports Dinner was born in 1972. We raised $19,000 in that first year; over $4 million more has followed since. The dinner has attracted thousands of attendees over the years, and has featured some of the leading personalities in sport as our speakers.

Aside from the Y Sports Dinner, I've had a number of other key activities and involvements in the Jewish community and beyond, including: chairing the Youth Aliyah dinner; chairing the Israel Bonds dinner; serving as a long-time soccer coach; serving as President of Glendale Golf and Country Club; co-chairing the 1999 World Junior Hockey Championships; serving as a Board member of the Winnipeg Jets for two years when the team was community-owned; chairing the Jets Vegas Nights and fundraising dinners for the Jets; over 30 years of involvement on the executive and as co-owner of the Winnipeg Blues junior hockey club; and many more.

I believe in the impact sports can have on the health of individuals and the well-being of a community; and I feel very proud of my Jewish heritage. To be able to devote my energies to sporting and Jewish causes is a great privilege.

I am also proud to participate in the Endowment Book of Life as an expression of optimism in the community's future. As I share these words in the weeks following my mother's passing, I recognize the efforts of our ancestors who built our community. Inspired by their lives, I try to do my part.