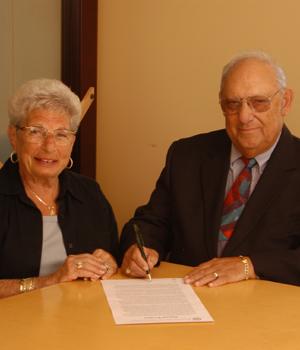 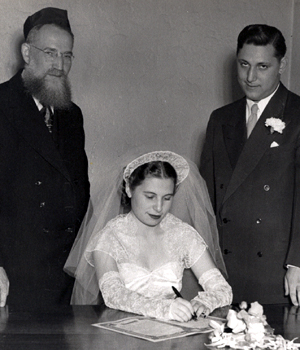 Kay and Irv Sera at their wedding 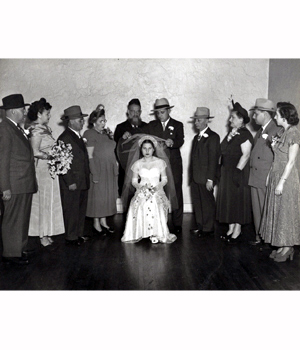 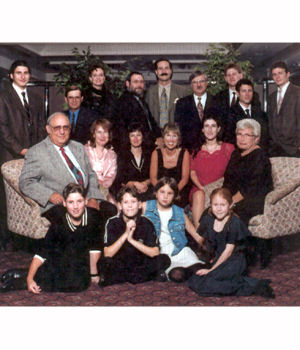 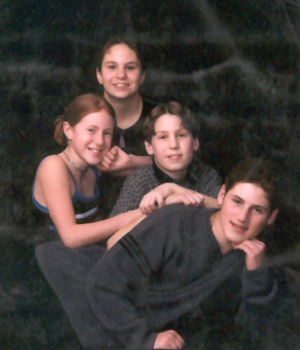 As Irv and Kay Sera begin telling their story they proudly state that they are both the products of the true immigrant experience. Irv's father, Sam arrived from Russia on a visitor's visa to see his Winnipeg-based sister and never left. His mother Freidel also came from Russia, but she arrived with her father and a few sisters. It was a contest to see which of these two families had less. Kay's parents, Barish and Minny (Wittman) Malinsky, in contrast decided to honeymoon in Winnipeg after marrying in Russia. They came to visit Barish's brother and never left.

Their decision to become signers in the Endowment Book of Life is to commemorate their parents' memory and publicly state that who they are as individuals is a result of the parenting that they have received. Irv's father was a quiet hard working individual whose focus was to put food on the table and a roof over the heads of his wife and three sons, Joseph, Ray and Irvin. His mother was in charge of the house and its inhabitants. Everything she did, for the children and her husband, she did with a smile on her face. Kay's parents were the proverbial good cop/bad cop. Barish, who called his second hand furniture store Benny's, was a very generous easy going man. Winnipeg was good to him as he prospered in a number of ventures. Kay recalls his pride in getting a new car each year. Kay's mother was the tougher more demanding parent who maintained the Jewish atmosphere in the home for the immediate as well as the extended family. Yontiff was always at the Malinsky home.

Life as children was quite normal. Irv devoted Monday — Thursday and Sunday to the Talmud Torah night school program while Kay attended Peretz School evening program, in their teenage years as their night school commitment lessened they began to spend more time taking part in public school sports and other activities as well as the YMHA. Graduating from grade eleven and having had some excellent relationships with his teachers Irv was motivated to a career in education while Kay decided to attend Business College and make her way in that world. These business skills came in handy as Kay recalls doing work at home while raising their children.

Irv's career has been very rewarding. Upon reflection he feels that his relationships with students, parents, colleagues, and trustees were satisfying and enriching. Although his career afforded him the opportunities to see all facets of the educational process he is hard pressed to be negative of any of the components. He rose to the rank of assistant superintendent in the Winnipeg School Division, and feels that his years at Grant Park High School were his most accomplished as he took a relatively new school and made it into a dynamic institution in all aspects of the educational spectrum.

Irv's educational career was an important part, but not the only part of his life. In 1949 Irv and Kay married and together they have two children, their son Hart and his wife Donna and their daughter Fayth and her husband Yale. Their children have provided them with four grandchildren, two girls, Lauren and Elizabeth and two boys, Geoff and Seth. They feel fortunate that both of their children have remained and prospered in Winnipeg.

As they reflect upon their life in Winnipeg both Irv and Kay feel that it allowed them opportunities to be involved in the community. As Kay succinctly puts it we've been elsewhere but "Winnipeg fits well". From the "tigers" at the Y to Young Judea to their major involvement with B'nai Brith, they feel that these experiences have all enriched their life. They believe that community involvement is good for an individual and a vibrant community is more likely to survive, prosper and grow.

When reminiscing about the Seras, Kay feels she will be remembered as a woman who enjoys a "bit" of gambling, the summers at the beach and winters down south. Irv will be the educator who is always learning. Rather than leave education upon his retirement he proudly relates how he developed the concept of "Lifelong Learning" as the mainstay of the Continuing Education program in the Winnipeg School Division. His lifelong involvement is his continual process of learning. Their messages to their children and grandchildren are succinct "live lives as you please" and in order to comply their next message is as parents "try not to interfere".