Karyn Lazareck - in memory of Anne and Joe Levin 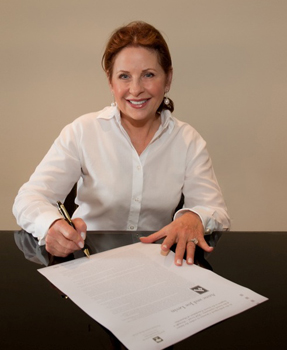 Karyn Lazareck signs her story for the Endowment Book of Life, in memory of Anne and Joe Levin 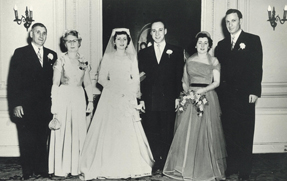 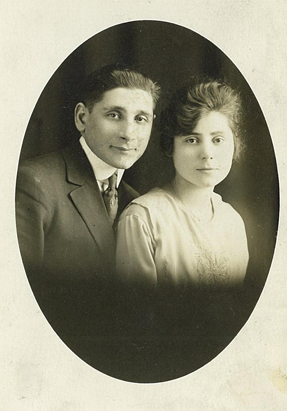 Anne and Joe Levin, as a young married couple 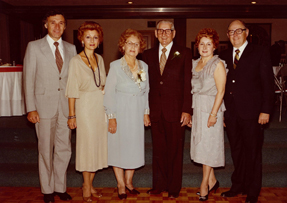 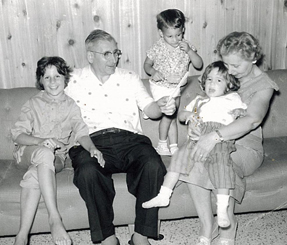 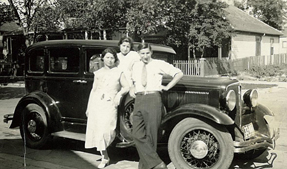 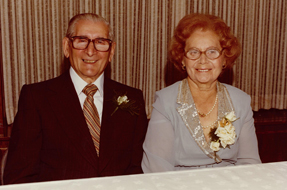 Anne and Joe Levin on their 60th Wedding Anniversary

Anne and Joe Levin began their married life in the most modest of circumstances, living in a barn in the small town of Rossburn, Manitoba. By the time they celebrated their diamond anniversary in Winnipeg, 60 years later, they had much to be proud of: they had built a loving and accomplished family, successful businesses, and enduring reputations as fine and philanthropic people.

Both Joe and Anne were born in Russia (1898 and 1900) and immigrated to Canada as young children. Anne (Annie Ethel) arrived as a baby with her parents, Bronja and Beryl Cera, from Kiev. She grew up on Henry Avenue and later moved to 460 Manitoba Avenue. The eldest of six siblings, she attended Dufferin School.

Joe arrived in 1906 at the age of eight with his mother, Eva (Chenison), and three siblings, Rose, Jack and Mary, from the province of Cherson, near the Black Sea. His father, Solomon Levin, had preceded the family to Winnipeg. Joe and his siblings - three more boys, Charlie, Sam and Al, were born in Canada - all grew up on a dairy farm on the northern outskirts of the city. The family was very poor and Joe attended school only sporadically, depending on who fit the one pair of shoes that he and his brother Jack shared. Joe's formal education ended in grade four.

Joe and Anne married on August 10, 1919. She would often joke that he gave her an engagement ring "with a stone smaller than a mustard seed". At the time, Joe was working with his father on the family farm and Anne was working in the notions (buttons and ribbons) department at Eaton's. Although it was well known that Eaton's did not hire Jews, Anne had managed to land employment there as a result of her non-Semitic looks and name. Upon marrying, the newlyweds moved to Rossburn, where Joe had found a job working in Mendel Peikoff's general store. It was there that Joe and Anne lived in the barn, forced to crawl under a horse every evening to get to their bed. Their daughter Ruth was born the following year.

Having saved a little money, Joe moved his small family into Winnipeg where he was able to purchase a small grocery store in Weston, a working class neighbourhood. The family lived in the apartment above the store. Although they were the only Jews in the area, their experience living there was very positive. In 1930 their daughter Shirley was born, beautiful but sickly. Hoping to outwit the evil eye and restore her to health, in keeping with superstition of the time they gave her a new name: Selma. On Shabbat the family divided their time between the two sets of grandparents, visiting one on Friday night and the other on Saturday night. They regularly socialized with a group of friends; dancing; listening to music (they were the couple who owned a gramophone) and snowshoeing in the winter.

During the Depression, Joe extended credit to many of his regular customers, depending on them to pay their grocery bills when they could. To his surprise, when the Depression ended he found that instead of settling with him, they were instead making payments on new cars. Looking on the bright side, Joe considered it might be time for a new business! While he continued to operate his store, he began buying and selling cars, one at a time, eventually opening a used car lot at Portage and Chestnut. He later opened Globe Motors on Bannerman and Main, a block away from the family's new home. He was the first Jewish car franchise holder (Chrysler Plymouth and Fargo Trucks) in Winnipeg. With improving circumstances, Anne, a perfectionist by nature, kept a gracious home, setting an elegant table and ironing her bed linen. She appreciated small luxuries such as scented soap and lace hankies, enjoyed playing kalooki, and remained a loyal Eaton's customer her entire life. Intent on keeping up with modern times and trends, she obtained her driver's license at the age of 58.

Although modest by nature, Anne had innate elegance, good taste and an artistic sensibility. She loved to draw birds and flowers freehand. Despite her humble beginnings she showed extraordinary sophistication in her attire and the home that she created.

For much of his life Joe was the head of a very large extended family and was always prepared to help with all the means at his disposal. He proudly put his younger brother, Sam, through dentistry school in the U.S. in the mid 30's and in 1940 he purchased a small store for his parents, and regularly left boxes of groceries on the doorsteps of his siblings and in-laws. His loving kindness to his family was also manifested in his devotion to his beloved Anne during her long final illness, even in preference to his own needs.

His philanthropy extended far beyond the family and into the community, both Jewish and secular. Joe was a successful businessman who understood well that the welfare of his community was the cornerstone of real success. He helped countless individuals realize their dream of car ownership and later provided seed money for many business start-ups, wanting to help people make something of their lives. Throughout his 40 years in business he enjoyed a reputation as a man of great integrity and intelligence, sealing each deal with a handshake.

Both Joe and Anne were firmly rooted in our Jewish tradition of tzedakah. He was a founding member of the Rosh Pina Synagogue, and led services at the Sharon Home with his brother Jack while their father was a resident and for many years after. Anne too was extremely active in the community. She was an active member of Hadassah, canvassed for the United Way and supported myriad charities. Her philosophy, instilled in her children and grandchildren, was to never turn anyone away and neither she nor Joe ever refused a request for help. They were ardent Zionists, contributing through United Jewish Appeal and the Jewish National fund. Sadly, they were never able to visit Israel.

The Levins' dedication to family, community, and to people in general became their legacy. One that they effortlessly passed down to their children, grandchildren and great-grandchildren, ensuring that they too would serve as builders and supporters of Winnipeg's Jewish community.