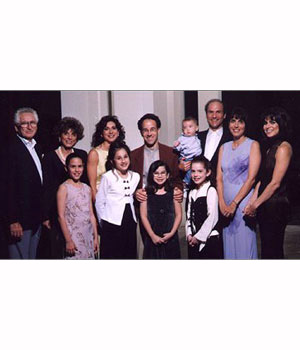 Monte Nathanson and his family 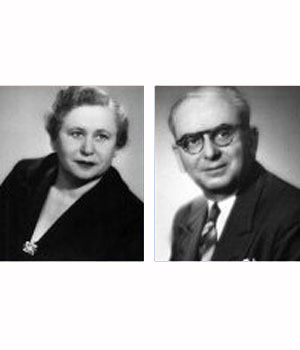 The Nathanson family exemplifies the Shema's admonition to parents to teach their children to identify actively with the Jewish people and religion, and to pursue mitzvot with a generous heart - the concept of D'or L'dor - from generation to generation - the key to Jewish community and survival.

Max Nathanson, Monte's father, arrived in Winnipeg as a child, early in the 20th Century. Once the struggle to achieve economic stability was completed and Max began a family, his home became a centre of cultural and educational activities and programs. In addition, he dedicated himself selflessly to the needy charitable and educational institutions in the Jewish community. Such a rich environment and example, enhanced by a parochial school education, nourished Max's son, Monte, to develop a social conscience and to become involved and contribute to many Jewish and some non-Jewish community organizations and activities.

At the age of 19, Monte became involved with the Jewish Welfare Fund, working on various committees and chairing the Budget and Allocations Committee. At the age of 30, Monte acted as General Chairman of the Winnipeg United Jewish Appeal Campaign. Monte served as President of the Jewish Welfare Fund in 1972 and as the first President of the Winnipeg Jewish Community Council in 1973 and 1974. Monte is also a Past President of the Winnipeg Chapter of Canadian Friends of the Hebrew University and sits as a representative to the International Board of Governors. Monte has served on the Boards of the Manitoba Theatre Centre, the Manitoba Medical Research Foundation and has worked as a Committee member of the United Way and Manitoba Centennial Corporation.

Just as his father did for him, Monte, married to the former June Rosen, has set an example to emulate for his three daughters, all of whom are graduates of Winnipeg's Jewish educational institutions. They have been inculcated with the same traditional values cherished by their parents and grandchildren, and they are now expressing these in the form of active participation and involvement as an example for their own children, all of whom (Monte's four granddaughters and one grandson) are receiving parochial school educations. All three of Monte's daughters sit on the National Cabinet for Federation.

The Winnipeg Jewish community has been enriched by the contribution and generosity of the Nathanson family and will continue to be so in the future through Monte's involvement in the Jewish Foundation's Endowment Book of Life.