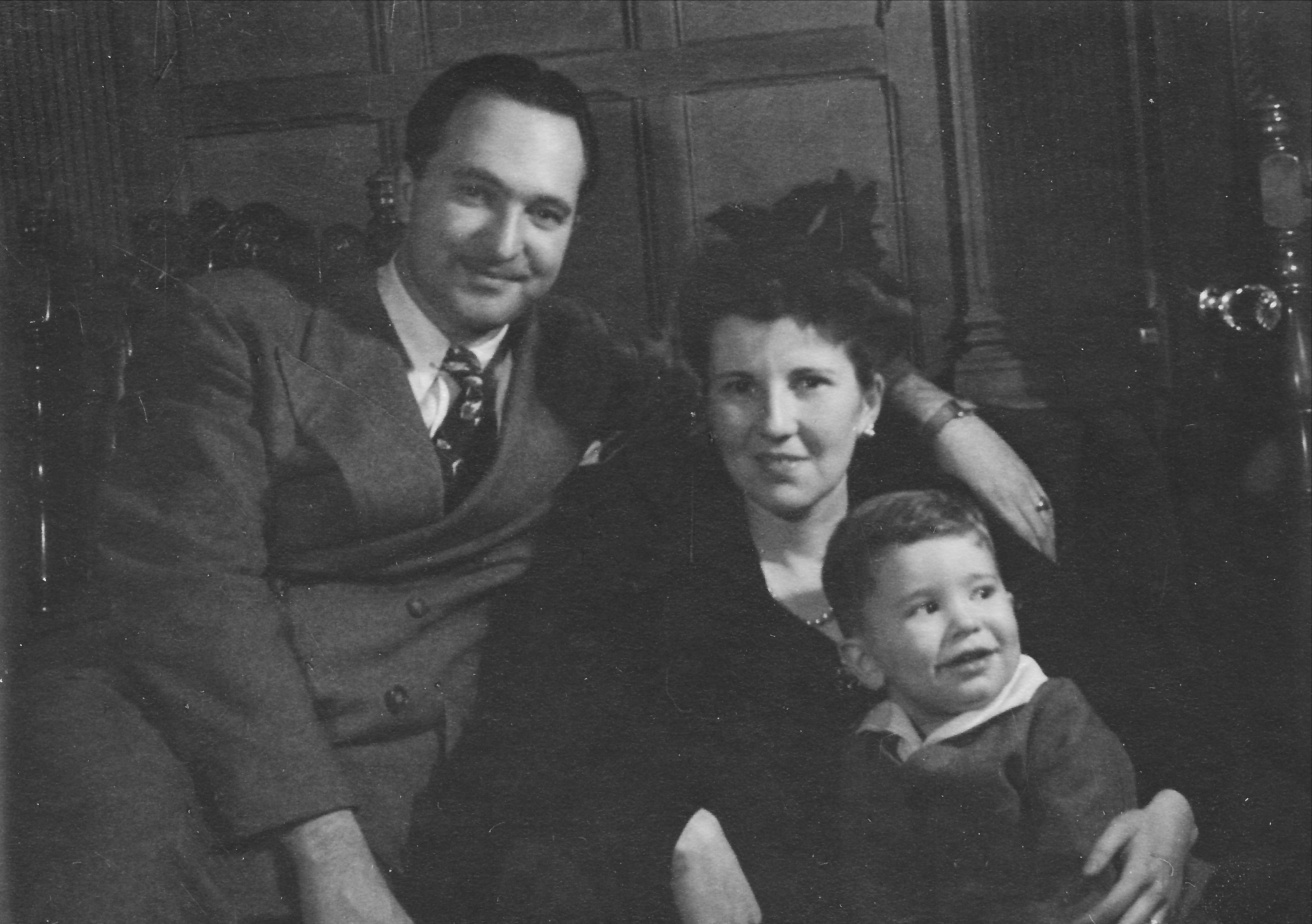 Ben Kanee was born on October 12, 1911, in Melville, Saskatchewan. He was the second son, and one of five children, of Sam and Rose Kanee who had immigrated to the prairies from Russia and Poland around the turn of the century. The family ran a successful general store in Melville and then established milling and grain businesses that eventually grew and prospered as they moved to Winnipeg. Harry, the youngest son, died at an early age from cerebral palsy. The surviving Kanee children — Sol, Ben, Abe, and Ricky — each achieved prominence in their respective professions and communities. Sol, the oldest son, became a successful lawyer and then a businessman and corporate director, running the family milling business Soo Line Mills. He was a leader in the Winnipeg community and with national and international Jewish organizations. Abe, the third son, ran Kanee Grain Limited, the family grain trading company. He was involved in the Winnipeg community and was president of the Sharon Home for the Aged for decades, until his death in 1987. Ricky Kanee Schachter, the youngest, like Ben, graduated in medicine and became a successful dermatologist and academic in Toronto.

After completing his early education in Melville, Ben obtained his M.D. at the University of Manitoba in 1934. Following his internship at St. Boniface General Hospital and the Regina General Hospital, he entered general practice, first in Roblin, Manitoba, and later in Weyburn, Saskatchewan. In the late 1930s he met the two loves of his life: the woman who was to become his wife and partner Helen (Goodman); and the city he would call the "Garden of Eden" — Vancouver. Helen was born in Calgary on March 22, 1913, and was the oldest daughter of Joseph and Bertha Goodman and sister to Zelda Manacher of Greenwich, Connecticut. Helen lived in San Francisco until her mid-teens when she moved to Vancouver. Zelda was a graduate of the Eastman School of Music in Rochester, New York, and a successful Lieder singer who performed at Tanglewood, Massachusetts. Helen was active in the growing Jewish Community and an avid tennis player, winning the Vancouver Public Lawn Tennis Championship for her age group. Ben and Helen were married in Vancouver in 1937 and moved to Weyburn and then to Winnipeg.

In 1940, after a debilitating illness — which was cured by Sulfa, the new wonder drug — Ben decided to pursue studies in dermatology. In 1941, with Helen and their infant son Benson, Ben left Winnipeg and undertook post-graduate training at Columbia University and at the New York Skin and Cancer Clinic until 1944. During his last year, he was an associate in the private office of Dr. G.M. McKee, a world leader in dermatology. He obtained his certification in dermatology and syphilology from the Royal College of Physicians and Surgeons of Canada and his diploma from the American Board of Dermatology in 1944. Ben turned down McKee's offer to stay in New York and in November, the Kanee family moved to Vancouver where Ben opened his private office in dermatology and syphilology. Their son Robert was born in 1946; their daughter Susan was born in 1947.

Soon after Helen and Ben's arrival in Vancouver, Ben became active in the health care community, pursuing his life-long commitment to improving the health of society. He drew on his unique diagnostic and teaching talents to pursue research in his field and helped younger colleagues gain an understanding of the emerging specialty of dermatology. He was appointed as a consultant in syphilology to the Provincial Board of Health in 1945 and served in that capacity until 1952. He joined the teaching faculty of the Department of Medicine at the University of British Columbia in 1946, and retired from this post as a senior associate in 1963. He was a consultant in dermatology for the Department of Indian Affairs and National Health and Welfare in the Coqualeetza and Miller Bay Indian Hospitals, and was a consultant in dermatology at the Louis Brier Home and Hospital. He was a member of numerous societies and served as president of the Pacific Northwest Dermatological Association and the Canadian Dermatological Association. Ben was held in high regard by his peers as a teacher and leader in his field. He was a frequent presenter with the Canadian Dermatological Association in the 1940s, '50s, and '60s, drawing on his extensive diagnostic experience that furthered this field of medicine. He contributed some 50 papers and reviews to the literature from 1933 to 1972. Ben retired from active practice in 1985 but continued to see patients in long-term care institutions.

Ben and Helen were modest about their many interests and volunteer activities. The visual arts were one of their passions. Ben was the first Jewish person elected to the Board of Trustees of the Vancouver Art Gallery where he served from 1963 to 1970. His tenure included stints as vice-president and chair of the Permanent Collections Committee. Ben was instrumental in the acquisition of a number of significant works for the gallery. He also played a key role in arranging one the first Canadian exhibits of Russian art from the Hermitage in Leningrad at the Vancouver Art Gallery. Helen expressed her love of the gallery by serving as a docent and, together, Ben and Helen prided themselves on their personal relationships with some major artists of their time.

They also loved classical music and opera and when the Vancouver Opera was established in 1960, they were among its earliest supporters. Ben served on the opera's Board of Directors and, later, its Advisory Committee. Ben and Helen often entertained on behalf of the Vancouver Opera and Art Gallery and many other not-for-profit organizations. They were gracious hosts in their grand Kerrisdale home overlooking the Fraser River Delta. Ben and Helen also travelled abroad extensively, cultivating their love of history and cultures throughout the world. Their travels included Canada, the United States, Mexico, the British Isles, Europe, Russia, Israel, Egypt, Iran, Japan, North and South Korea, and China.

Ben and Helen were long-time supporters of the Vancouver Jewish Community. They were early members of the Beth Israel Synagogue where Helen served as chairperson of the religious school for 10 years. In addition, Helen was president of the Jewish Family Service Agency for many years. As Vancouver Jews were restricted from local golf courses at the time, Ben and Helen were among the founders of the first Jewish golf course, Gleneagles near Horseshoe Bay — even though neither of them ever played golf! They both supported many local, national, and international Jewish organizations and particularly, in later years, the Louis Brier Home and Hospital. Helen died at the Louis Brier after a long struggle with Alzheimer's disease in 1991. In 1998, Ben sadly lost his oldest son Benson.

Ben died at the age of 90 in 2002 at the Louis Brier Home after a short illness. He would often remind his children that he "goes to bed each night looking forward to getting up the next day to enjoy another day in his Garden of Eden". He continued to share great empathy for his fellow man and woman. Ben and Helen celebrated their love of life and their good fortune to be part of the community in their chosen city of Vancouver, in beautiful British Columbia, a part of their parents' chosen country of Canada. They came a long way from Melville and Calgary, and Ben and Helen Kanee — in their quiet, soft-spoken way — demonstrated that a good life is experienced in the living and the giving, and it is well worth the journey. Their cup of life remained full.

L'dor va'dor — from generation to generation — by their example Ben and Helen continue to inspire through their values of commitment to community and Jewish life; their love and support of the arts; continuing education; and their embrace of tikkun olam, the Jewish imperative to repair the world. Ben and Helen's values are reflected by their children, grandchildren, and great-grandchildren: their son Robert and his wife Judith; Robert and Judith's son Richard Kanee, his wife Elana Schachter, and their daughters Mia and Charlotte of Toronto; Robert and Judith's daughter Jordana, her husband Dan Signer, and their sons Benny and Abie of Sherman Oaks, California; Ben and Helen's daughter Susan and her husband Merle Reekers; Susan and Merle's son Scott of St. Louis, Missouri; Susan and Merle's son David Reekers and his wife Shanna Winesburg of Washington, D.C.; and Ben and Helen's grandson Dr. Allan Kanee (son of Benson and Sheryl Kanee z"l), Allan's wife Dr. Thea Wiesdorf, and their children Lauren and Leah of Toronto.