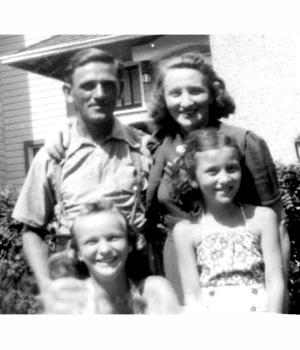 Back: Louis and Mary London, Front: Judith and Lillian 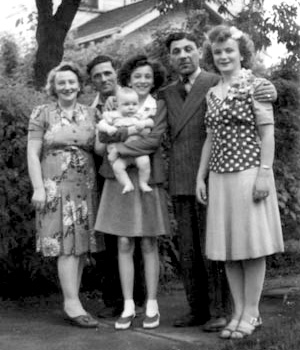 My roots lie in the Polish communities of Volkovysk (my mother's birthplace/home), and Bialystok (my father's). Mary Kabuzatski and Louis London married in 1923, my sister Lillian was born in Bialystok in 1925. In 1928, my dad came to Canada and, a year later, sent for my mom and sister. Life was not easy for them, as was the case for most immigrants, especially since, during the following year while my mother was pregnant with me, my father was hospitalized for almost a year, during which time I was born in 1930. The circumstances surrounding my birth deserve an entire story. To earn a living, my mother opened a tiny grocery store in the living room of our bungalow on Mountain Avenue, which she maintained cheerfully and uncomplainingly as was her wont, until my father came home from the hospital and resumed his role as breadwinner. In 1941, my parents established Playland, a small amusement parlor at Winnipeg Beach, a memorable landmark which they continued to operate until my father's death in 1962. My kid brother Jack was born in 1943.

We grew up in the North End. I attended Machray elementary and St. John's high schools and went on to earn a B.A. at the University of Manitoba in 1950. There was no Convocation ceremony that year due to the Big Flood. As a university student, I joined Iota Alpha Pi Sorority, served on the Arts Council Executive, was one of the first Jewish cheerleaders, then one of the first trio of drum majorettes on campus. We led the parade celebrating Winnipeg's 75th birthday celebration.

After marriage, I was active in a number of organizations, serving as president of Winnipeg Women's ORT, group chair of National Council of Jewish Women, secretary of the Women's Committee of the Winnipeg Symphony Orchestra, and lending support to many other groups, Jewish and general, both by membership and volunteer participation.

I hope that our children will be able to say of me what I have always said of my parents, that their legacy of love, hope, optimism and joy of life is invaluable and one for which I shall be eternally grateful. My mother, who mothered and brought joy to all who knew her, always believed that an unhappy person is one who looks in the mirror, whereas a happy person looks through the window...she always looked through the window, and what an example she set!

Having written the above, I am aware of how much remains unwritten...watch for the book.