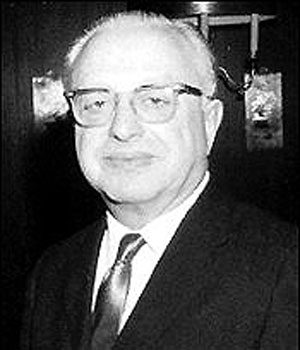 I was born in Dubna, Russia in 1899. My parents, Samuel and Riva Halprin, with my brothers Irving and Louis and sister Edith settled in Winnipeg in 1904. My wife Rachel Feinstein, was born in London and came to Montreal with her parents and family members at about the same time, and all ended up in Winnipeg. We were married in 1924. I worked for the Union Bank, then for Isbister & Morton Law Office, and became General Counsel for Aronovitch and Leipsic Ltd. for 26 years. I became involved in Real Estate development and built some of the first Safeway stores in Winnipeg and later developed retail stores for Shop Easy in Winnipeg, Ontario and Alberta. I was on the building committee for the YMHA on Hargrave Street and involved myself in many community activities and arbitrations.

I had a dream and shared it with my boyhood friends Abe Werier and Sam Werier. With their support and the foresight of 107 members of our community, the Jewish Foundation of Manitoba came into being and our dream became a reality January 14, 1964.

It started with the gift of land in Middlechurch by myself and the Werier brothers. It is a Tree of Life for our community. It will serve and mold and flow with the future and it will flourish as a Tower of resources.