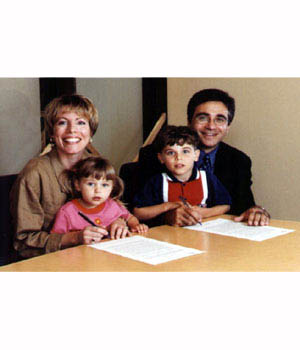 Cara and Jonathan Kroft and their children, Emily and Daniel

After high school, I attended the University of Manitoba Faculty of Arts and then the Law School, where I served as vice president of the Student Council. Law was part of my family tradition. My great grandfather was a Rabbi, my grandfather, A. Montague (Monte) Israels, was a lawyer, as are my father and uncle. That legal background served me well at law school and I graduated as the gold medalist.

When my grandfather, Monte Israels, passed away in 1974, a prize was established in his name to be awarded each year to a graduating member of the Manitoba bar admission course. Winning that prize had very special meaning for me and my family.

On June 24, 1984, I married Cara Lerner. Cara was a first year medical student. While I worked hard to establish a law practice, Cara finished medical school and began training as a psychiatrist.

In 1989, Cara and I moved to Boston where I obtained a Masters in Law from Harvard Law School and Cara finished her psychiatric training. Cara and I returned to Winnipeg where she began to practice psychiatry and I resumed a legal career.

Cara and I have two children, Daniel who is five, and Emily who is two.

Before I was born, my mother Hester (Israels) Kroft taught at River Heights School. My father was a lawyer and is now a judge on the Manitoba Court of Appeal.

My parents came from families who were well settled in Canada by the early part of the twentieth century. In fact, one of my mother's grandmothers was born in Winnipeg in 1884.

My father's parents Charles Kroft and Heloise Cohn, and my mother's parents Monte Israels and Sally Kalef, were all active and dedicated members of the Jewish community. Both of my grandfathers were founding members of The Jewish Foundation of Manitoba.

By being active and involved in both secular and Jewish community affairs, I am trying to follow the example set for me by my parents, grandparents, uncles and aunts. I have been particularly active in the organized Jewish community for many years now. I am currently serving as Vice-President of the Winnipeg Jewish Community Council and as a board member of the Jewish Foundation and the Jewish Heritiage Centre.