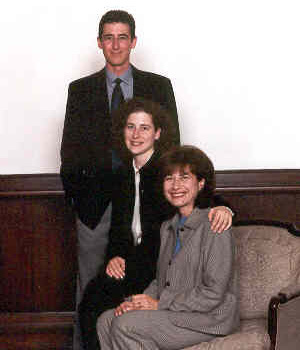 Joanne with her children, David and Laura 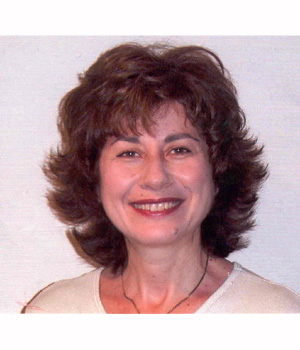 I was born in Winnipeg on September 28, 1946 to David and Evelyn Bernstein. My grandparents came from Russia and settled in Canada in the early 1900's. My maternal grandparents, Sarah and Benjamin Sarner were an integral part of the Winnipeg Jewish community. Benjamin Sarner was the first superintendent of the Sharon Home and was the Director from 1922 to 1952. He traveled across Western Canada, through great hardship to raise money for the Sharon Home, so it could exist and thrive. My grandmother Sarah, (Babie) was an enormous inspiration to all her family for her devotion and love of her family and Judaism. The dinners she regularly held were integral to my development of what it meant to grow up in a Jewish environment. My paternal grandparents were Clara and Abraham Bernstein and sadly I never knew my grandfather, as he died in his twenties.

I was the only girl of four children born to David and Evelyn Bernstein. Together they owned and operated Graham Jewelers, which was a jewelry and gift shop that was very popular in Winnipeg. Often I worked with my father delivering the presents to young brides who would register for their wedding gifts at Graham Jewelers. My father died in 1970 at 53 years of age.

I grew up, involved in Brownies and Girl Guides at the Shaarey Zedek and moved onto intense involvement in BBYO. I enjoyed my community involvement at a very early age and continued on to become a life member of the National Council of Jewish Women, President of Winnipeg Montessori School and participated in many other fundraising and community events. I was part of the team that developed Travel Israel: A Resource Centre that was dedicated to the encouragement of youth travel to Israel. In 1967, I joined the staff of the YMHA and loved my involvement with the youth and teen departments. I was the Director of Camp Funland, then located at Ramah School.

My brothers Alan, Richard and Brian have gone in three different paths. Alan and his wife Donna live in Winnipeg with their two children, Lisa and Michael and are involved in the "Hangers" chain of retail stores. Richard is an architect in Vancouver while Brian is a vice-president for Nesbitt Burns in Vancouver. He and his wife Elizabeth have one daughter Sarah. Even though we have all gone in separate directions our ties to Winnipeg and our memories of summer at the lake keep bringing us back both physically and emotionally.

I have two children, David and Laura Sheps. Laura resides in Vancouver and is practicing physiotherapy. David is an orthopedic resident in Saskatoon and will be finished his five-year residency in 2002.

I developed a successful travel business that operated for twenty years until I retired in 1998.

I am devoted to the continuity of Winnipeg's Jewish community. I was able to participate in so many programs and activities that contributed to my growth and development. I am grateful to this Jewish community for its programming and devotion to Jewish youth.

I trust that Winnipeg will continue to provide the youth of the future an opportunity to be exposed to the wonderful opportunities I experienced. I feel fortunate to be able to contribute in some way to that community.