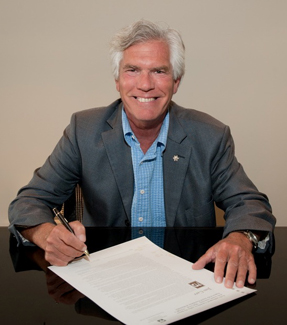 Jim Carr signs his story for the Endowment Book of Life

My grandparents all arrived in Canada in the early 1900s. They came from Europe with no money and no English; they came with nothing but hope, optimism, and the desire to work hard to make a life for their families in this young country.

Those early seeds of risk and hard work have taken root as the Carr and Golden families have flourished in this great land. It's a story that can be told thousands of times for thousands of families who saw Canada as an oasis of calm and opportunity in troubled times. I'm very aware, and proud, that to this day people from around the world continue to come to Canada. Together, we weave an elegant, multicultural tapestry that is the envy of the world.

Our contribution to the tapestry began with my imprisoned maternal grandfather, Sholem Golden, convincing a prison guard that "today is the day I am to be released." My Odessa-born Zaida simply walked out of his Russian prison and made his way to Guernsey, New York, and then ultimately to Winnipeg where he married Rasha Pearlman, who was born in Belarus.

Zaida Sholem was a dreamer who played guitar, sold insurance, and inspired others in North Winnipeg to embrace the Labour Zionist cause. Baba Rasha was his strong, loving, and very patient partner. My memories of Zaida are rich. I recall playing the oboe for him in his later years, while he sat legless in his wheelchair.

Sholem and Rasha had four children: Don, Esther (my mother), David, and Fran. Remarkably, they are all alive and healthy in 2011 as I write this. All in their nineties, all physically fit, and all full of exceptional character and wit.

My father, David Carr, was the son of Avrum and Liba Carr (née Freedman) and the brother of Ben, Jenny, and Bessie. Baba Liba and Zaida Avrum were both born near Kiev in Ukraine and, in Winnipeg, lived near many of Liba's siblings and their families; it was a colourful time in the North End. To this day, I joyfully recall Baba Liba's smiles and hugs accompanied by her favourite, and perhaps only, English expression: "a million dollars." Zaida Avrum was a respected chazzan in the city. His day job was in the rag trade.

The Carr name was originally "Carretto," suggesting some Italian heritage. The name changed to "Karetnik" when the family moved to Ukraine, and then to "Carr" when the family arrived in North America.

David and Esther married in Winnipeg on June 14, 1942. Even though he couldn't see, my father had remarkable vision for his family and his work. He owned and operated the Maryland Grill and then went into the theatre business. He owned the Oak Theatre on Main Street and managed others for Western Theatres, despite being legally blind. My parents had a vibrant social life, as they frequently attended screenings and movie openings. My mom was mostly a stay-at-home mom, but also a home-based cheesecake entrepreneur who sold her prized pastry to the Airliner Hotel. My dad was active at the Montefiore Club; my mom with Hadassah. My parents enjoyed travel and they celebrated each other's company.

I was born in 1951 and grew up with my older brothers Alex and Robert in River Heights. My brothers and I were very close, even though they had to keep me in line. Our childhood included long, luxurious summers at Winnipeg Beach with swimming, day camp, and joyful hours with the Golden extended family.

My childhood was also full of sport. I played serious baseball through River Heights Community Centre. I also played football as a quarterback and, unfortunately, still remember a disastrous stint as a hockey goalie. I remain an avid sports fan and golfer.

I was involved in some Jewish youth activities and enjoyed my time as a member of Toppers in BBYO. I had my Bar Mitzvah at Shaarey Zedek where I shared the pulpit with another young man, Howard Gurevich.

I attended school at Brock Corydon, Montrose, Grant Park, University of Winnipeg Collegiate, the University of British Columbia, and McGill University. I have enjoyed—and still do—a diverse career. I have always been drawn to pursuits, both volunteer and professional, that have the potential to improve life in my city, my province, and my country. I played oboe with the Winnipeg Symphony Orchestra; served on the editorial board of the Winnipeg Free Press; have held senior administrative positions with the Manitoba Arts Council and the University of Winnipeg; and I served my community for four years as a Member of the Legislative Assembly and as deputy leader of the opposition. Today, I am proud to be the President and CEO of the Business Council of Manitoba, a group of 75 CEOs of Manitoba's leading companies.

As a volunteer, I have been involved with many great organizations including the Canada West Foundation, the Arthur V. Mauro Centre for Peace and Justice, and the Winnipeg Poverty Reduction Council.

Above all, I'm a dad. Like my own father who sang "You Are My Sunshine" to my brothers and me, Rachel, Ben, and Rebecca are my sunshine. I am proud of their goodness, their independence, and their drive. I am also happy to be actively involved in the lives of the three children of my loving partner, Colleen Suche.

It is a pleasure to participate in the Jewish Foundation of Manitoba's Endowment Book of Life program. I see my participation as an expression of gratitude for the opportunities in this province and country, and as an expression of optimism that our future as Jews and Manitobans is bright.