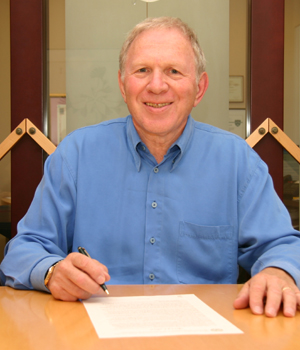 Jerry Cohen signs his story for the Endowment Book of Life 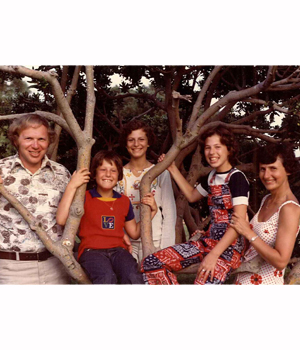 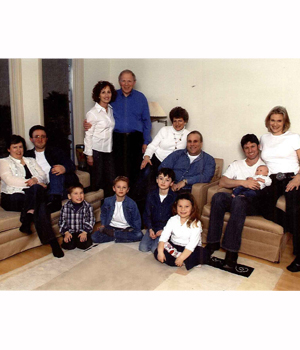 Since my birth in 1938, life has been anchored by the love of immediate and extended family. To this day, I celebrate life to the fullest with my family and friends.

My parents, Sam Cohen and Jen Simkin, were both born in Winnipeg in 1910. My father's parents—Yoseph and Minnie Cohen—came from Romania. My mother's parents—Shmuel and Fanny Simkin—came from Russia. All of my grandparents arrived in Manitoba at the start of the century.

I am the oldest of four children. My sisters Ester Malka Cohen and Barbara Hyman (Robert) live in Winnipeg while my sister Saralyn Greenblatt (Jim) lives in Neve Ilan, Israel. My early school years were spent at Peretz Shule, Machray Junior High and St. John's High School. I have a vivid memory of playing on the 1954 St. John's city championship football team. My youth was enhanced by my Bisons club days at the YMHA. I still remain in touch with "the herd" and we celebrated a 50th anniversary in Winnipeg in 2001.

I grew up in the North End, and we lived in a number of different homes. The one I remember most fondly was our house on McAdam and Main where we hosted many Hillel functions and had as many as 90 people at boisterous, loving Simkin family Pesach seders.

After high school, I earned a Bachelor of Education degree at the University of Manitoba, and later my M.Ed. in 1971 while on sabbatical. My U of M years were highlighted by my involvement in Hillel, led at the time by Rabbi Zalman Schachter. It was in Hillel that I developed a passion for Jewish life and a strong sense of Zionism. It was also where I met Carole Shell who became my wife in 1961. Carole and I spent the first year of our marriage in Israel where I taught English. We seriously considered aliyah, and although we moved back to Winnipeg, we maintained a strong connection to Israel, and traveled there frequently.

Together we had three children: Shira (married to Stuart Slayen); Naomi (married to Sheppy Coodin); and Ari (married to Lisa Ryder Cohen). Our marriage was rich and joyful; steeped in yiddishkeit and colored by travel, including a year-long trip around the world. Her family embraced me and I remain very close to Carole's family to this day.

Carole was my anchor as I pursued my career in teaching, administration and Jewish communal volunteer work. Throughout the 1960s and 1970s, I was active on the boards of the WJCC, Chai, Folklorama and Talmud-Torah/Joseph Wolinsky Collegiate. I taught at Gordon Bell High School for 10 years; was a principal's assistant at Elmwood High School; was vice-principal and principal at the Adult Education Centre; and in 1980 I became principal of JWC and served in that position for 17 years. My time at JWC was the hallmark of my career. It was more than a job—Jewish education became my passion. My memories of student musicals, basketball games and Jewish awareness retreats remain vivid. And I am so proud that five of my grandchildren are enrolled in the Jewish school system today.

In the summer of 1996 tragedy struck as Carole was diagnosed with lung cancer. She battled the disease with tremendous courage with the help and support of loving family and friends. Even in the midst of her illness, there were periods of remission, and we continued our traveling whenever possible. In October of 1998, Carole succumbed to her disease. It was a devastating time.

A while after her passing, I took a six-week car trip down the west coast of the United States to reconnect with family and friends and gather my thoughts. I committed myself to emerge from grief and to continue to live life to the fullest. In the summer of 1999, I began a relationship with Susan Margolis and learned that it is possible to find deep, meaningful love more than once. We married in 2001 and I welcomed her children Aaron (married to Rachel, nee Rusen); Jon; and Michael into my life.

Together, Susan and I have seven grandchildren: Yoni and Elly Coodin; Cari and Noah Slayen; Talia Cohen; and Nicole and Mitchell Margolis. Spending time with them is one of my greatest pleasures.

While officially retired, I work part time supervising student teachers for the University of Winnipeg's Faculty of Education. And I have developed a new passion for the game of bridge. I play frequently and now teach as well.

My life has been, and continues to be, full and exciting. I have been blessed with many gifts. I remain a proud Jewish Winnipegger.