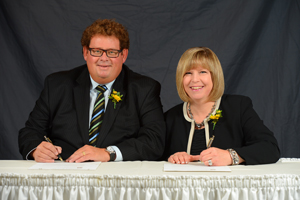 Jeff Lieberman signs his story for the Endowment Book of Life

For many years I have sought ways to be active in the Jewish community. To me, community volunteerism is an expression of profound optimism and connection. I hope that ultimately I will be remembered as someone who made a positive contribution to community life; more important, I hope that my kids get involved and engaged in community service throughout their lives.

I was born in 1959 to Aron and Dora Lieberman (née Wise). My father was born in Poland in 1927 to Ya'acov and Nacha. His parents, along with eight brothers and a sister, perished in the Holocaust. Not surprisingly, to this day, my father chooses not to speak much of the trauma of the war years. Very few relatives survived. After the war, my father left Poland, spent a few years in Amsterdam, and then made his way to Canada, landing first in Montreal and then taking the train to Winnipeg. My father worked for David Kaufman Z"L, making clothes, and also owned and operated a grocery store in East Kildonan.

My mother was born in Winnipeg in 1933 to David and Esther (née Bunis). I had the pleasure of knowing my Zaida David, but not my Baba Esther. My mother was a wonderful woman. She never had a bad word to say about anyone — a value I try to emulate. She attended Aberdeen School and St. John's Tech, ran the grocery store, and worked for Sears for 25 years. She was kind, hard-working, hospitable, and a terrific cook, for whom family meant everything. In the years leading up to her passing in 2011, she shone as a Baba.

My brother Garry and I grew up mostly on Semple Avenue in West Kildonan. I attended Governor Semple School for elementary (as well as Prince Edward School in East Kildonan while my parents ran the store). I later attended Edmund Partridge Junior High and West Kildonan Collegiate. As a child, I also attended Rosh Pina night school, mostly in preparation for my Bar Mitzvah which was held at the Talmud Torah Synagogue. For High Holidays, we went to the House of Ashkenazie.

My childhood was a happy one, featuring sports, sports, and more sports. I played some organized hockey and football, but it was the informal games with neighbourhood buddies that stand out the most. We used to go to Kildonan Park and play for hours. For years I played ball, ice hockey, softball, bowling, and more. I also have fond memories of Jewish holidays at home and annual family vacations to Detroit Lakes.

After high school, I went to the University of Manitoba where I graduated with a Bachelor of Arts degree in history and a Bachelor of Commerce degree. It was also in university where I began to take a very serious interest in volunteerism. I became active in the Jewish Students Association and volunteered at Shalom Square during Folklorama. In 1986, I went on a Combined Jewish Appeal mission to Israel. That experience was inspirational and to this day, I am an active volunteer. I have been the President of the Rady Jewish Community Centre board, Chair of the Winnipeg Jewish community's Yom Ha'atzma'ut Celebration, Chair of the Israel Pavilion for Folklorama, a CJA canvasser, a member of the board of the Winnipeg Jewish Community Council, an active volunteer with the annual Y Sports Dinner and more. Outside of the Jewish community, I served as the Chair of the Folklorama Festival, and am currently a Director of the Winnipeg Blues hockey club and a board member of the University of Manitoba Alumni Association. I'm especially proud of my work with the Rady JCC and am looking forward to the Centre becoming an even more important hub of Jewish educational and cultural programming. During the work day, I am the owner of The Great Promotional Products Company, a business I have been running since 1989.

I met Robyn Buchwald in 1988. We married a year later at the Shaarey Zedek Synagogue. We have three wonderful children: Amy (born in 1992); Josh (born in 1995); and Noah (born in 1999). I've coached my sons' hockey teams and have attended numerous events and activities over the years. To me, there is no happier time than family time, whether it's a vacation together or simply the five of us chatting over dinner.

Through the way we live, and the way we try to treat others, Robyn and I hope to instill within our kids a love of community, a commitment to serve others, and a desire to make the world a better place. We like what we see so far — we're very proud of our family.