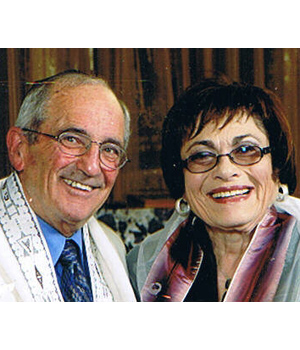 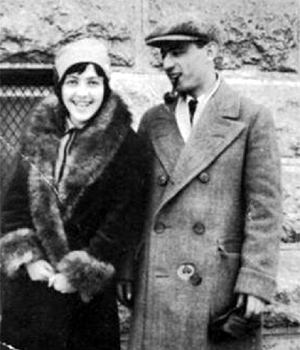 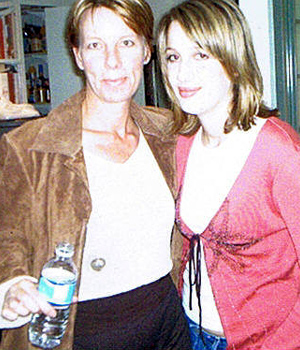 Daughter Ruthie with her daughter Minnie 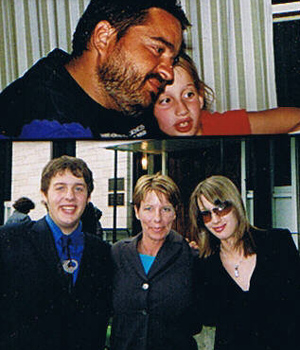 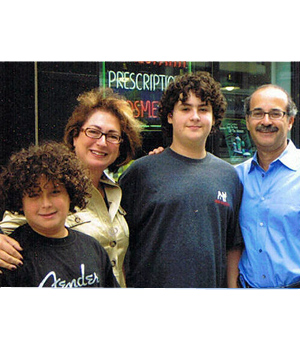 Daughter Ivy with her husband Murray, and sons Leo and Max

My father, Leo Robinovitch, was born in 1905 in Kiev. At age 21, he came to Winnipeg, sponsored by his brother who was already in Winnipeg, working as a university professor. In the 1930s my father witnessed the unemployment and the bread lines. He was moved by the hardship that people were enduring and he concluded that socialism could lead to a better, fairer, and more just world. He was attracted to the Communist Party because that party espoused his sentiments regarding social justice.

When he found work in the garment industry, he began to organize unions as a result of which the garment industry blacklisted him in Winnipeg. He could no longer find work here, so he left Winnipeg to find work elsewhere, and he settled in Montreal where he continued working as a union organizer. My mother, who had previously met my father in Winnipeg, came to Montreal and they were married in 1932. I was born in Montreal on February 14, 1934. We moved to Toronto where my father continued his union and political activity until we returned to Winnipeg in about 1939. In Winnipeg, as well, he continued his union work. His work in the labour movement is recognized at the National Archives, in Ottawa.

Eventually, in the early 1950s he established Alcone Furs, a fur manufacturing shop. In about 1955, however, there was a fire in the Time Building where his shop was located. He lost everything. But he started over again working as business manager for a union. My mother passed away in the late 1960s. My father later retired and moved to Toronto where he had many friends. In Toronto, as a volunteer, he led discussion groups on issues relating to current events at Baycrest Centre. My father was gregarious. He had a magnetic personality. He was an idealist. He read voraciously and was well informed. He had a strong influence on all the young people of our family and their friends.

My mother, Freda Cohen, was born in Volochisk, Russia. Her parents Lazer and Fay Cohen, moved their family to Canada. They settled first in Winkler, and later moved to Winnipeg where they operated a corner grocery store. My mother graduated from United College. She became a teacher at a Jewish School. Once married and with children, however, she stayed home and worked to keep a traditional, kosher Jewish home. She was totally committed to her family. She was active in the Zionist movement.

My grandfather and grandmother bought a home. My grandparents, my parents, my mother's brother and sister, me, and later my brothers Moishe, born June 23, 1936 and Gary, born August 4, 1944, all lived in that house.

In 1952 I was attending the University of Manitoba. I was in my 2nd year in the faculty of Arts when I met Robert Lionel Kopstein (Bob).

The following school term I enrolled in Education and graduated as a teacher in 1954, just prior to our wedding on June 23, 1954. That September I began to teach at Sir John Franklin School in Winnipeg, and Bob started law school. I taught for 3 years and then stayed home to raise my family, although I did continue as a substitute teacher, and mark high school English papers. At the same time, I studied and took courses in group dynamics. When all 3 of our children were in school I went back to full time work, initially as a counselor at the A.F.M. My background as a teacher, however, facilitated a change in my career path, as I moved into staff development, training, and addiction prevention. I became a specialist in adult education. I was soon hired by the Manitoba Department of Corrections as director of staff development and training, to work with Probation and Corrections staff, instructing them on how to train and counsel others to function efficiently in their work with a variety of offenders. I wrote manuals, developed programs, and I kept educating myself in order to pass along new information, ideas and techniques to others. It was a wonderful job!

In 1982 I was seconded by the Government to set up and establish the Manitoba Women's Directorate. There, for 2 years I worked on policy issues and developed structures for the integration of women's concerns in the decision making processes of Government. At end of two years, the task of setting up the Women's Directorate being completed, I returned to Corrections, and continued my former work. In 1996 I decided to retire. Before leaving Corrections, however, I developed a 5-year strategy plan with guiding principles for the further progress of staff training, programs and the treatment of offenders. I was told that my work had a lasting impact on Government decisions.

Bob is the light of my life. He has worked as a lawyer and a judge. He was the kind of judge who was eminently fair and he treated everyone with dignity and humanity. He never became cynical. I am so proud of him. We have three children and four grandchildren. Our daughter Ivy Fay (1956) is married to Murray Palay; their children are Leo and Max. Ivy became active in community affairs after her retirement as Director of Social Services at St. Amant Centre. Our daughter Ruth Leanne (1962) is married to Chuck Green. Their children are Louis and Minnie. Ruthie became a medical radiation technologist, and later, a C.T. technologist. She loves her job at Health Sciences Centre. Our son Alan Neil (1966) has a Bachelor of Education and is a teacher working in the Winnipeg School Division.

I have been a member of the National Council of Jewish Women, of play reading groups, of the Canadian Friends of the Hebrew University both as a Board member and as a facilitator, and of the NDP party. Among my favourite activities are reading, travelling, and — my #1 passion — movies!

I hope there will come a time when women can walk outside at night without fear, and when children can play on our streets in safety. Also, my hope is that there will be peace in Israel. I wish our community well.