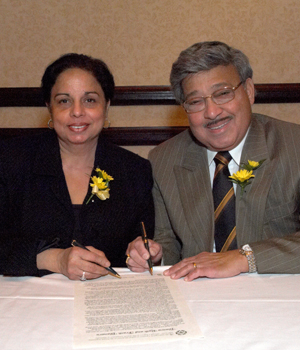 Every arrival is an anticipation of hope and future prosperity.

Leaving India was very traumatic for my wife and two young daughters. After which time, our entire family followed within six months.

Living twenty six years free of any discrimination or anti-Semitism, we considered our years in India any Jewish person would have relished.

But what seemed as an exodus unparalled in Indian Jewish history was an amazing feat, because at the height of prosperity, Jews were leaving India by air and sea, without chariots chasing them.

We followed the trend and left our beloved land of birth and were accepted by Canada in 1968.

Barukh Hashem, The Almighty, has his plans and reasons. We have grown to a large group of three generations.

May Hashem bless and keep the Jewish heart beating for the land of Israel.

"Plant the seeds of righteousness; reap the benefits
with G-d's boundless kindness."