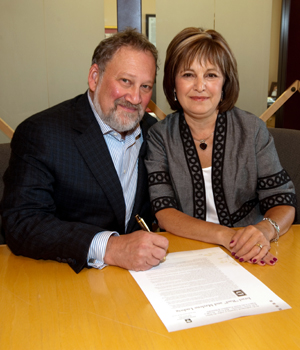 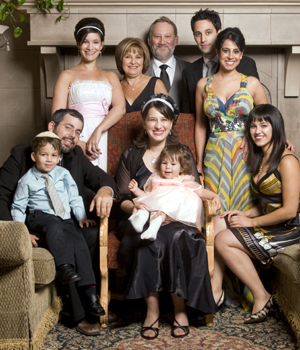 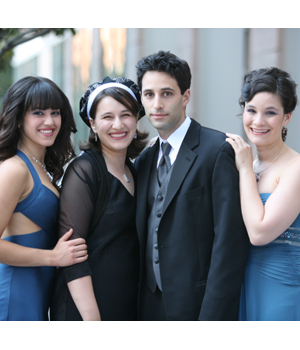 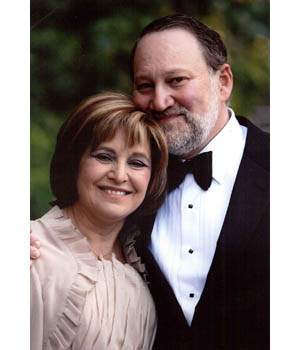 Our lives together began December of 1971. We met at a wedding, started dating shortly after and knew very quickly that our love for one another was beshert. The smiles on our family faces told the tale. Rael's two sets of grandparents and my paternal grandparents came from the same shtetal called Propoisk. They knew each other well and when we announced our engagement Rael's Baba said they were dancing in heaven!

Even though we grew up in Winnipeg our childhood paths did not cross. Rael grew up in the North end, eldest son of Bertha and Joseph Ludwig. He attended Luxton School and St. John's Tech. His family attended Rosh Pina Synagogue. Rael's Hebrew education culminated at Maimonides College. He attended University of Manitoba, Faculty of Law, 1968-1972.

I grew up in River Heights, the eldest daughter of Priscilla and Norman Donen. I attended Montrose School, River Heights School and Grant Park High School. My family was members of Shaarey Zedek Synagogue and I attended Shaarey Zedek night school. I attended University of Manitoba, Faculty of Nursing 1968-1972. We celebrated our graduation from Law and Nursing together and convocated at the same ceremony. Our parents sat together and shared our hopes and dreams for the future.

We were married July 15th, 1973 at Shaarey Zedek. It was agreed that if we married at Shaarey Zedek we would become members of Rosh Pina. Our honeymoon was in Israel and truly was the beginning of our Jewish commitment as a couple to the Winnipeg Jewry. As Rael began his law practice and Maylene nursed at Children's Hospital we began to explore what we could do as a young married couple. Maylene joined ORT and National Council of Jewish Women. Rael became involved with the League for Human Rights of B'nai Brith and later the Winnipeg Jewish Community Council.

Our family soon began to grow. Our daughter Sidura was born March of 1976, our son Jacobi was born June of 1977. We moved into our first home on Elm Street just before Cobi was born. Our children attended the YMHA nursery school and our second daughter Avital was born December of 1980.

Our children's education was the catalyst to our involvement with the Jewish community. They attended Ramah Hebrew School and we found ourselves involved in a learning curve centered around Hebrew language, Jewish holidays, love of Israel and Jewish family life. Family Shabbat and holiday celebrations echoed in the walls of Elm Street and then Oak Street where our home is today.

There was a growing need to support our community through volunteer work and Rael and I began the journey of sitting on various boards, learning and contributing to the building of our community. I became involved at Rosh Pina, continued to be active in NCJW and Rael found his calling sitting on the Rosh Pina board as well as the Jewish Federation and committees and boards affiliated with multiculturalism.

Our daughter Yaffa was born in October of 1988. Our life centered around our children. Sidura went to Grant Park High school and Cobi entered Joseph Wolinsky the following year. Avital followed a few years after. I joined the JWC parent advisory committee and also sat on the Rosh Pina board. It was at that time that Rael and I became aware of the Jewish Foundation of Manitoba and its support of the Jewish community as well as the general community.

As our children began their paths of University education it became very clear that financial support would greatly help their journeys. They turned to the Foundation for support and each of our three eldest were awarded scholarships at various times in their pursuit of higher education.

When our youngest child, Yaffa, celebrated her Bat Mitzvah she opened one of the first Bar/Bat Mitzvah Funds with the Jewish Foundation. We were so proud of her commitment. It was the beginning of our family giving back to the Foundation to help others.

Our children have done us proud. To date our daughter Sidura is married to Jason Shron and they have two children, Boaz and Dalya. Sidura is a novelist and Jason owns a business called Rapido Trains. They live in Toronto. Cobi is married to Nancy Samanipour. They live in Minneapolis. Cobi practices dentistry and Nancy is attending University pursuing a Master's degree. Avital is in Vancouver where she works as an actor. Yaffa is at University of Manitoba, Asper School of Business.

To our children and grandchildren we wish a future of love of learning, a sense of belonging and commitment to one another. Most importantly we wish good health and happiness.

To our Jewish Community we wish koach, strength to stand among the people of Manitoba and be proud Jewish Canadians. We wish for our community to stand with eyes open wide beside our neighbours and help those who are less fortunate.

Marcia Falk , in her book, The Book of Blessings, created an alternative blessing for children on Shabbat eve. It reads: "Be who you are and be blessed in all that you are."

The work of the Jewish Foundation supports so many worthy programs and causes. We are truly blessed in who we are and in all that we are.