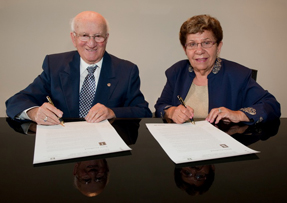 Isaac signs his story for the Endowment Book of Life 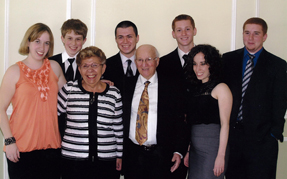 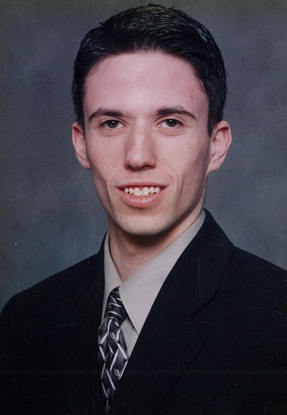 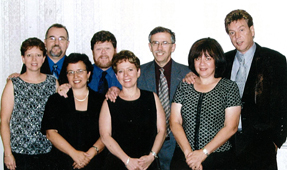 I find great purpose in telling my story of Holocaust survival to school children and others in Manitoba and other parts of Canada. I witnessed horrifying murders; experienced intense hunger and pain; and suffered immeasurable loss. Today, it is my goal to share a message of tolerance and acceptance. Since 1992, I have shared my message through hundreds of visits to high schools and community groups. I pray that my story will resonate with the people I reach—especially the youth—and that all people will pursue peace and brotherhood.

I was born in Czestochowa, Poland, in 1925 to Shmuel and Chana Gotfried. There were only a few Jews there, so I went to a Catholic school. My father eked out a living as a cabinet maker, but we were quite poor. My parents, three sisters (Hinda, Faige, and Zlata), and my brother (Bernard) all lived in a small, two-room apartment where the kitchen also served as my father's workshop. A fourth sister, Sarah, died at the age of 19 in 1938.

My teen years were interrupted dramatically by the German invasion of Poland. Our town was overtaken by the Nazis on the third day of the war. Shortly after the fall of Sosnoviec, I recall witnessing the shooting of the town's teachers, lawyers, union leaders, and others whom were feared by the army as people who might organize a revolt. My brother and I were among those commanded to bury the corpses.

Then came the yellow Stars of David and the ration cards. The war had hit home and it was clear that life would never be the same for Europe, for Jews, or for me.

After working in a factory for four months, I was shipped to the Gross-Rosen slave labour camp. The labourers were overseen by soldiers; the sounds of their barking German Shepherd dogs haunted me for years. We marched to and from our worksites and laboured 12 hours a day, surviving on artificial coffee, small chunks of bread, and cabbage or beet soup. A good day meant a spoonful of marmalade at breakfast and a sliver of potato in the evening soup.

Conditions were terrible at Gross-Rosen, but not as bad as they were in Buchenwald, the concentration camp where my 2,000 fellow prisoners and I were ultimately sent. On the very crowded train to Buchenwald, some passengers threw Jews out the windows of the cattle cars to make more room. I saved my life by praying out loud in Polish, as I learned to do in elementary school.

Upon arrival at Buchenwald, the SS captain greeted us by asking one of his Capo men to pull a prisoner out of line and then beat him to death in front of us. We were served meagre portions of food, some of it experimental artificial food that made us ill. We were crowded into the barracks and I recall sharing a bunk with as many as eight others at a time with no mattresses, pillows, or blankets. One particularly horrible memory is a night when I asked the man sleeping beside me to move over so I could have more room. He did not respond, because he was dead. I turned to the man on my other side and asked him for the same favour. He, too, was dead.

As the allies advanced, the inmates of Buchenwald were marched to the southwest. I along with about 50 other inmates tried to hide in a pile of straw in a barn en route, only to be coaxed out by bullets and dogs. We were lined up against a wall, but we all ran before the order to fire was given. I was brought back by a civilian and somehow spared by my captors. I watched in horror as many of the other men were shot.

Shortly thereafter, I escaped a heavily guarded line of inmates on the death march by running and hiding under a hay wagon. When the line marched by and it became clear that I hadn't been noticed, I ran into the forest where I discovered some abandoned German army uniforms and some canned stew. The uniform I put on helped me remain free; the food almost killed me... I was sick for weeks. A farmer discovered me in the forest and gave me food and temporary shelter.

As the war wound down, French soldiers, thinking I was a German soldier, sent me to a POW camp. Through an interpreter, I explained who I really was and was liberated. I went toward Bergen Belsen. On the way, I was recognized by a man who said he had seen my brother recently in a displaced persons camp. I set out immediately to find him, and indeed found Bernard in three days. I don't remember our initial meeting, but I remember him kissing my forehead while I fell asleep on our first night together.

We stayed together and left Europe for Canada in 1947. We came to Winnipeg because we had relatives here, the Mittlemans, who were wonderful to us.

I met Hilda Goldberg in 1950 and we married in 1951. I worked as a carver at Cramer's Furniture and went to the University of Manitoba at night to study sketching, and to high school to study English for two years. I peddled confections and beauty items and eventually opened Central Wholesale. Then, for many years, I sold insurance for London Life.

Hilda and I have enjoyed a beautiful life together. We have four daughters (Irene, Susan, Marla, and Paula), seven grandchildren, and one great-grandchild. Hilda and I worked as volunteers in Israel for two winters and we enjoy an active social life. I have also worked as a volunteer for Jewish Child & Family Service, and delivered Kosher Meals on Wheels until I was 80.

My life in Europe was utter misery, but my life in Canada has been full of great joy. It is my hope that our commitment to the Jewish Foundation of Manitoba will contribute to a growing community that is tolerant, accepting, and successful.

May no people ever again experience a Holocaust. May we learn from history.