In Memory of My Father, Yisrael Yitzchak Silverman 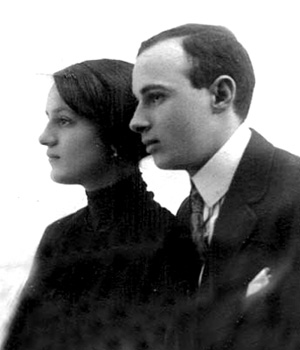 My parents on their engagement 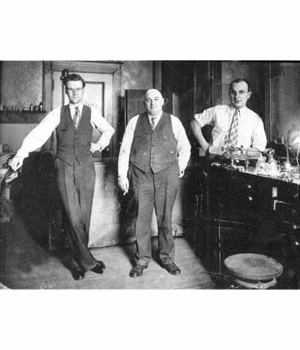 The beginnings of Silverman Jewellers, L to R our first watchmaker Alfred Ferguson, my father, and brother Abe, circa 1935

My father was born in the year 1889 in the village of Sahki, Lithuania. My grandfather died before my father was born and my little Baba, in order to raise her son and three daughters, moved to the city of Mariampole where she opened a small bakery. My father received a good education and read the classics in Hebrew. He also received private tutoring in English and could read, write and speak English before coming to Canada.

One day Baba approached Mr. Trotsky, the town's jeweller, and asked if he would take her son into his shop as a watchmaker apprentice. "I am sorry," said Trotsky, "I do not have a place for your boy." To which Baba replied, "In that case, find somewhere else to buy the `tzibbele boulkis' that you enjoy so much." Trotsky returned in a few minutes and said, "I suddenly remembered where I can put a bench for your son!"

Along about 1906 my father sailed for Halifax where a number of relatives were settled. Possibly Pa, as we children called him, had intended to return to Europe. He loved his adopted country, and the winds of change, revolution and pogroms were sweeping across Europe. In Halifax my father opened a small jewellery shop on Gottigen Street and achieved a modest success, but after a year he heeded the call "Go West Young Man" and in 1909, on a Sunday, Pa arrived in Winnipeg.

Within hours of arriving in Winnipeg, Pa had a job with Andrews Jewellers at the salary of 35 dollars a week! Quite by chance the Rabbi Schorr family had moved to Winnipeg and my father began to court the middle daughter Esther, a rare beauty. The Schorrs were from a distinguished family of Viennese rabbis, cantors and opera singers. A cousin, Friedrich Schorr, sang at the Met for over 20 years. When Rabbi Schorr decided to return to the U.S., my father and Esther asked permission to be married. She was not yet 16 but very mature.

By the time she was 23 my mother had given birth to five children: my three sisters Zelda, Pearl and Sylvia, my brother Abe and myself. We all came of age during the Great Depression but my father because of his skills was never without work. It was during these days that Silverman Jewellers was born.

The business was a repair business but even during the Great Depression it grew rapidly doing "trade work" for other jewellers including the Hudson Bay stores. In the early days, in a Model T Ford, Pa also travelled far and wide, buying scrap metals to support his little brood. When I came into the business in 1935, the scrap metal business had ended, but jewellery merchandising was just over the horizon. Besides my father, Abe and myself we employed two other watchmakers and a clockmaker.

My father died very suddenly in 1951 as a result of a stroke at the age of 62, just three days before we opened our own building on Main Street. It was almost a year to the day in 1952 when his youngest child, Arthur Saul Silverman died very suddenly at age 23, of heart failure.

Throughout his life, my father clung passionately to his Jewish faith and every evening wherever he was he would rise to say his evening prayers by heart. He was an inspiration, a brilliant craftsman, and a loving father.