In Memory of Morris Katz 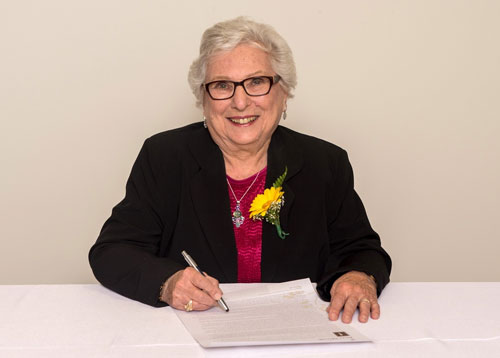 Esther signs her story for the Endowment Book of Life 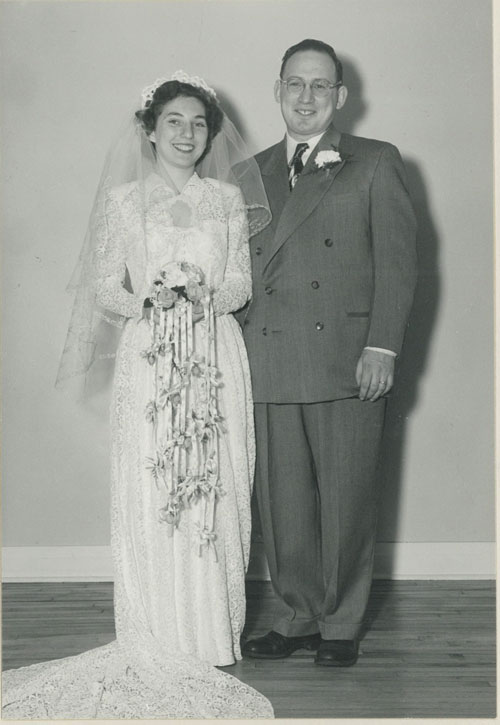 Morris Katz was gentle, honest, hard-working, curious, and cultured. A good man, gone too early at the age of 59.

Morris Katz was born in 1925 in Winnipeg, the only child of Bernard and Tillie Katz (née Goff). His father was born in Birz, Lithuania, eventually moving to South Africa to live with his brother. Bernard eventually left South Africa for Canada, settling for a while in Yorkton, Saskatchewan, where Morris was raised. Bernard passed away in 1957. Tillie passed away in 1963. Very little is known about her and her family.

Although Morris was born in Winnipeg, the family moved to Yorkton so that his parents could run a grocery store. Morris attended public school and had private lessons to prepare him for his Bar Mitzvah. The family ultimately returned to Winnipeg where Morris attended Machray School and St. John's Tech.

Jewish rituals were not a high priority in Morris's family home, although he did go to synagogue on the High Holidays. That said, his social circle was predominantly Jewish and he joined HaShomer HaTzair as a teenager where he met Esther Shore, who later became his wife.

After graduating from high school, Morris began his career in the grocery business with a job as a clerk at Manitoba Wholesale, followed by a stint at Waterman's Grocery. Eventually, he went into partnership with his father at Y-Not Foods. The store was initially located at Ellice and Balmoral and later moved to Ellice and Spence, across from the University of Winnipeg. While no longer owned by the Katz family, the store still operates today.

Morris and Esther married in 1951. They raised their two sons, Philip and David, in the family home on Enniskillen Avenue in West Kildonan. Morris cared deeply for his sons, and he and Esther created a Jewish household where seders and Rosh Hashanah dinners were important events. Sadly, both sons passed away as young men. David in 1982; Philip in 2014. Morris died of cancer in 1985, four years before his triplet grandchildren (Matthew, Cara, and Jonathan) were born to Philip and his wife Fay-Lynn.

Aside from raising sons together, Esther and Morris also worked together at Y-Not Foods. Esther worked part-time so that she could manage the household; Morris worked full-time-plus to earn a living for the family — seven days a week.

Never having gone to university himself, Morris loved running a store so close to U of W. His customers included many students and professors and he loved hearing about their work. He asked questions and engaged his customers in conversation to satisfy his intellectual curiosity. To Morris, it was important to build relationships and his customers loved him for it. He was honest and straightforward, and earned their trust easily.

Morris sold the store in 1976 and took a job with Merchants Consolidated for several years before retiring at the age of 55.

There wasn't much spare time in the life of Morris Katz, but when he wasn't working, he enjoyed quiet nights at home with Esther, Philip, and David. He enjoyed lectures, concerts, and live theatre, and was especially passionate about opera and classical music. And while his work routine didn't allow much time for volunteer pursuits or hobbies, he did find some time for photography.

Morris Katz was a private and modest man, never one to blow his own horn. He might have even been reluctant to be paid tribute in the Endowment Book of Life. He did, though, care about the community's health and future and would likely have been proud to participate in the program.

While Morris Katz's life was cut short by illness, it was a full and loving life. He was a decent man who cared deeply for his family and for his community.