In Memory of Lew Miles By his wife, Isabelle Miles 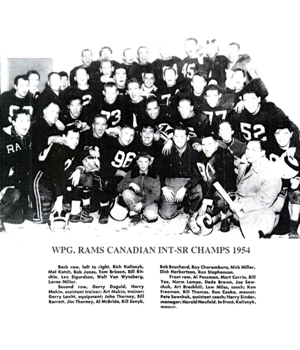 Isabelle Miles signs her story for the Endowment Book of Life

My husband, Lew Miles, was born in Winnipeg on August 24, 1921 and passed away on March 26, 1994. He was the son of Harry and Mashe Miles who emigrated from Russia in the early 1900's. He had two sisters who predeceased him, Celia Cohen and Mincie Appel.

Lew was the owner of Lew Miles Las Vegas Charters for 25 years and was well known for his many years of association with Las Vegas junkets. Prior to that, he was involved for a number of years in the movie theatre industry with his cousin, Richard Miles.

During the Second World War, Lew served with the Air Force as a wireless instructor.

In 1944, Lew played football with the Winnipeg Blue Bombers. He later became coach of the Winnipeg Rams Football Team and guided them to a National Championship in 1954.

In 1962, he became involved with thoroughbred race horses. He served as President of the Horseman's Benevolent and Protective Association.

Lew married Isabelle MacLean in 1946 and together they worked making Lew Miles Las Vegas Tours a successful and remembered business.