In memory of Joe and Clara Erlichman 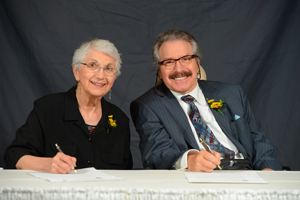 Joe was a soft-spoken, dignified gentleman of the highest integrity. He truly reflected his last name which means "honest man." His respect for others was limitless, and his philanthropy and mentorship helped many. Photography, classical music, golf, tinkering in his workroom, and fishing at his beloved Rush Bay cabin were a few of his favourite pastimes.

Clara was warm, generous, understanding, and quick to laugh. She loved entertaining and cooking for her family and friends and was always putting on a pot of coffee to share a chat. Her love of nature manifested itself in her bountiful garden, scrumptious preserves, and long, berry-picking walks. She loved to read and her book club, "bible vibels," didn't restrict itself to bible study.

Born in Zhvanets, Russia (now Ukraine) in 1903, Joseph (Joe) Erlichman was an apprentice pharmacist when he escaped to Canada in 1920. Shortly after arriving in Winnipeg he developed tuberculosis. While convalescing at the Ninette Sanatorium, he grew to love photography. His health restored, Joe founded Winnipeg Photo Ltd. in 1929 and the business grew into one of the leading photofinishing companies in North America. He was admired by employees and respected by peers.

Clara Erlichman (née Simkin) was born in 1912 in Pine Ridge, Manitoba, now Birds Hill Provincial Park. Clara was the third of seven children, six of whom survived. The Simkins spoke Yiddish in the home and attempted, unsuccessfully, to run a farm. Clara was helpful, but mostly loved to read her English books. After high school she moved to Winnipeg to work.

Clara and Joe were married in 1936. They had three children: Ruthy, Eby, and Martin. Their Aberdeen Avenue home was filled with music. In the late '50s they moved to Seven Oaks Place, a cul-de-sac where three of Clara's brothers also had homes. Clara and Joe celebrated multi-generational Friday night dinners, Chanukah parties, and simchas with their close-knit families and spent summers at their cottage at Winnipeg Beach. They also loved to travel and always came home from exotic locations with exciting stories, art, and a gallery of photographs.

Clara and Joe's community work was beyond generous. Joe was president of the International Photo Marketing Association and inducted into his industry's Hall of Fame. He was a Mason, a member of the Rotary Club, and chairman and life member of the Buck Rogers Group. Clara volunteered for numerous organizations in the Jewish community. They supported Jewish education, especially I.L. Peretz School, where Joe was president and a trustee. He was a governor of the Jewish Foundation of Manitoba.

In the late '80s Joe retired and they moved their winter home from Scottsdale, to Palm Springs, California, buying a home in Cathedral City, on the same street as Clara's four younger brothers, Seven Oaks Place.

Clara and Joe were loving, devoted, and extremely generous parents, grandparents, and great grandparents. They were frequently celebrated by their family with songs at simchas. Their grandson David Gale, a professional actor, playwright and Endowment Book of Life signer, wrote a musical about Jewish life on the prairies. Chutzpah à go-go was produced across North America and featured the song Canadian Dream, the story of Clara and Joe. Joe passed away in 1995 and Clara in 2000. Blessed be their memories.

He escaped from far off Russia
On his own at seventeen
His home town Zhvanets, soon to be at war
His running stopped in Winnipeg
Where cousins took him in,
And Yiddish kept the strangers from the door

His name was Yosel, they called him Joe
And he taught himself their language
And he learned all he could know
For this was Canada, so young and oh so free
Could such a land just let his people be?
Yes this was Canada, of lakes and prairie streams
A perfect place to create a Canadian dream

She was born outside of Winnipeg
On land for immigrants
One sister here, one sister heaven sent
In Pine Ridge they were farmers
Speaking Yiddish, doing chores
Four brothers born, and who could ask for more

Her name Chaya, they called her Clara
And she loved her books and nature walks
Her head so full of dreams.

At 21 he knew his health was failing rapidly.
In the '20s TB often took its toll.
But he was quite a fighter
And he'd come too far to die
He moved to where his illness couldn't stay
His name was Yosel, they called him Joe
And his cure was breathing winter air,
The country and the snow...

Her name was Chaya,
His name was Yosel
He called her Clara
She called him Joe

‍
And together we began a life,
How long no one would know
He was an immigrant,
Her head was full of dreams
They made things turn out, not just how they seemed
For this was Canada, so young and oh so free
This brave new land would let their family be
Yes this was Canada, of lakes and prairie streams
The perfect place to live...the Canadian dream