In Memory of Esther & Manuel Lecker by their daughter Joanne Rothberg 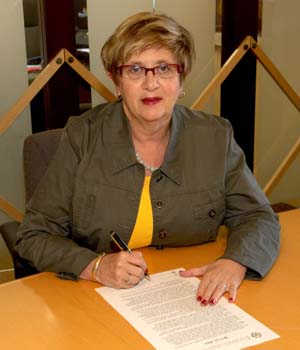 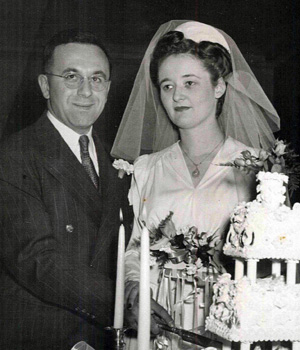 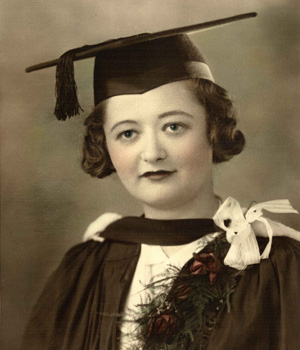 Betty and Larry Rice at their wedding 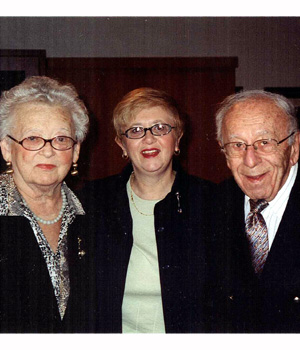 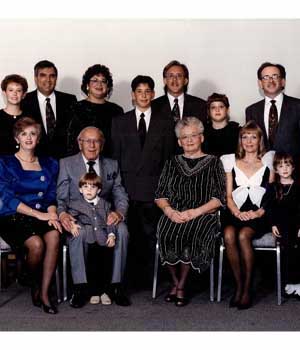 Both Esther (Shuckett) and Manuel Lecker were born in Winnipeg to immigrant families. Manuel's parents had arrived in Canada as children. His mother, Marie Shaen, arrived with her parents and seven siblings from Remnie-Savat, Rumania in 1904. Marie spoke five languages, and was often asked to translate documents for the courts.

Manuel's father Joseph Lecker and his family emigrated from Hattna Bucovina, Austria-Hungary and originally settled in Montreal. He and Marie were married at the Shaarey Zedek Synogogue (then called Shaarey Shomayim) on Dagmar Street on January 7, 1912. They had five children: Manuel (1913), twins Cynthia and Tamara (1914), Garson (1921) and Sydney (1924). They lived for a time in Taber, Alberta where Joseph had a men's clothing store, before returning to Winnipeg to settle.

In 1924, when Manuel was 11, his father was killed when he tried to break up a scuffle in his brother-in-law's Winnipeg Main Street store. As the eldest, Manuel became the patriarch of the household and assumed the responsibility of looking after his mother. She managed to support her family with a small confectionary store on Wardlaw Avenue. After high school, Manuel received his Bachelor of Science from the University of Manitoba and his Doctor of Optometry from Columbia University in 1935, which he attended with support from his mother's brother, Jim, an optometrist. He then served with the Canadian Army and the Royal Canadian Air Force from 1940-1944, receiving an honourable discharge with the rank of Sergeant.

Esther's parents, Jacob and Rachel (Levin) Shuckett emigrated from Pocotilov, Russia. Jacob first settled in New York and he then came to Winnipeg where Rachel's brother (S.B. Levin) lived. Rachel met him in Winnipeg with the three eldest children. Esther was born in Winnipeg on March 3, 1917, the fifth of seven children — Ben, Nathan, Goldie, Dave, Fritzie and Morley. For a while, her father operated a general store in Fork River, Manitoba, followed by the establishment of Winnipeg Lumber on Johnson Avenue. Esther graduated with a Bachelor of Science in Home Economics from the University of Manitoba in 1938. She married Manuel, the love of her life on December 2, 1944 at the Royal Alexandria Hotel in Winnipeg.

Manuel adored Esther. He would hold her hand at every opportunity and always referred to her as his duchess. He practiced Optometry for 60 years, working with his uncle Jim and later with his son Robert. Esther was a stay at home mom raising, with Manuel, their three children: Joanne, Robert and Brian at 438 Montrose Street.

Manuel was always a kind, quiet and demonstrative man, completely devoted to his family. He would kiss everyone when he came home from the office. Esther was considerably more outgoing, with an infectious personality that drew others to her. She was very creative and talented, especially at handiwork. She made personalized purses, sweaters and scarves that she enjoyed giving away as gifts, even to strangers. She also wrote speeches and poetry, with something for every family event. A 30 year cancer survivor, she consistently maintained a very positive attitude and outlook on life. Esther and Manuel enjoyed many summers with their family at Clear Lake and were long time members of the Shaarey Zedek Synagogue and Glendale Golf and Country Club. They were both active with the Manitoba Association of Optometrists. Manuel served a term as President and Esther worked on behalf of the Women's Auxiliary. She was also active in both Hadassah and Sisterhood. They traveled extensively - to Israel and many places around the world.

Mom and Dad enjoyed almost 62 years of true wedded bliss. Their passing within eight months of each other - Mom on October 24, 2006 and Dad on June 19, 2007 — is testimony of their mutual adoration for one another. They shared a love for each other and family which will extend into eternity.