In Memory of Doris Margolis 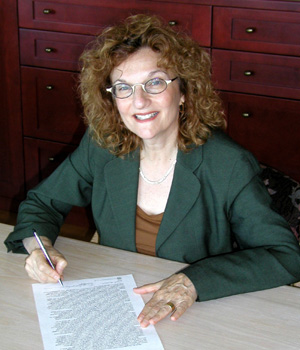 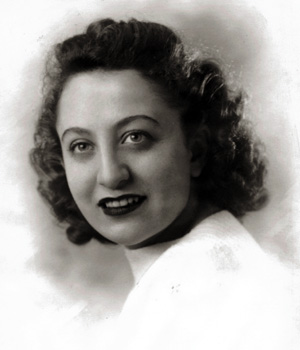 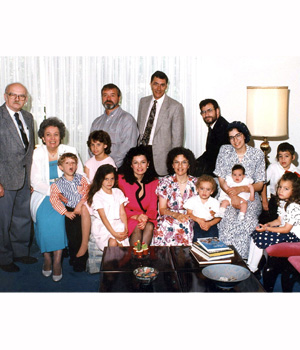 The Margolis Family in 1991 at Doris's 75th Birthday 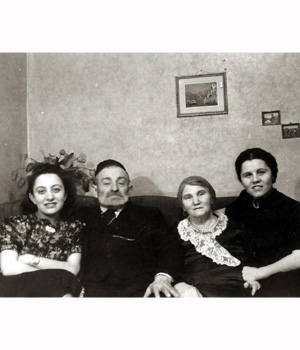 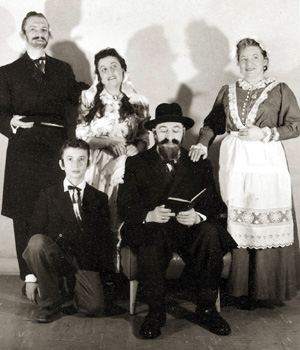 Doris T. Margolis (1916-1997) was a vital force in the Winnipeg Jewish Community. A lyricist, poet, writer, choir conductor, vocalist, actress, businesswoman, chairwoman and a natural storyteller, Doris devoted her life to her husband and her daughters, and to Jewish language and music. Her memoires, A Little Bit of This and A Little Bit of That, remain, ten years after her death, a humorous, poignant and telling legacy about her family, her life and her achievements.

Dvoreh Torchinsky Margolis was the only Canadian-born child of elderly Ukrainian immigrants, Pesach and Zippora Wachnovetsky Torchinsky, weighing in at two and a quarter pounds when her mother was almost 50. Doris was named after her mother's sister who died when Zippora was only 18, leaving behind three young sons. As was customary in the Ukraine in those days, Zippora was obliged to marry her widowed brother-in-law, Israel Shusterman, in order to care for the boys. The young man she had hoped to marry, Pesach Torchinsky, went on to marry another woman and had a child before being widowed. Zippora and her husband had two more children before Zippora too was widowed. Pesach and Zippora, with six children between them, married, and went on to have seven more children. Doris was the youngest in the closely-knit, extended family.

Doris was raised in an orthodox Jewish environment where she learned about the importance of family and of Jewish language and culture, values she would cherish throughout her life. She attended the I.L. Peretz Folk Shul and remained involved as an alumnus, deeply committed to Yiddish education. Doris had a particular love for poetry and lyrics. She collaborated for many years with writer and broadcaster, Noah Witman, creating entertaining Yiddish skits for both radio and live performance. She also left us with some exceedingly beautiful Yiddish lyrics to several well-known and loved melodies, including Exodus, Autumn Leaves and Windmills of Your Mind. It was in Exodus that she was able to express her deep love and devotion to the State of Israel and the Jewish people. Her commitment to the State of Israel was also expressed through her work for Hadassah-Wizo. Upon retirement as president of the Aliyah Chapter after many terms of office, she was given the highest accolade for her "graciousness, steadfast direction and leadership."

After being encouraged to join the Jewish Women's Musical Club's choral group in 1950, following the birth of her second child, Doris went on to chair the Club's Studio Group and began writing, composing and directing musical sketches. In spite of her lack of a formal musical education, she both wrote and starred in, The Rabbi's Niggun, a musical drama based on her parents' shtetl experiences, and presented in 1958 at the YMHA. Ultimately, she served as president of the Musical Club for 25 years, hosting numerous events, raising funds for young artists, and writing countless musical skits. Doris also was active with the National Council of Jewish Women, serving as choral director for the Jewish Women's Golden Age Club Choir for many years.

Doris married Harold Margolis on the eve of the war. Together with his parents and two siblings, Harold had immigrated to Canada from Kiev in 1924, when he was 12 years old. Harold and Doris honeymooned at her parents' Winnipeg Beach cottage that Zipporah and Pesach ran as a kosher boarding house during the summer months. During the war, Harold served as an Air Force airplane mechanic. After the war, he opened a printing press (Kromar Printing), something he had always dreamed of doing, and Doris devoted herself to her widowed mother and to raising her three daughters, Paula (Penny) born in 1945, Reesa in 1950 and Judy in 1956. Owning a printing company made it possible for Harold and Doris to step in when the Israelite Press newspaper was threatened with closure. Together with Noah Witman, Doris dedicated herself to running the newspaper office, thus helping to maintain an important instrument for Yiddish expression and commentary. In 1967, Doris was the recipient of the "Sydney" award for her contribution to Jewish culture.

Doris and Harold's daughters have all made their homes outside Winnipeg. Penny lives near Halifax, Nova Scotia, with her husband Ben Willemsen. Reesa lives in Anmore, BC with her husband, Bob Devlin, and their three children, Jessica (Steve) Blissett, Samara, and Michael. Judy lives in Jerusalem with her husband, Leon Bubis, and their five children, Nathaniel, Shira, Pesach, Zipporah and Frima. Fortunately, Doris lived to know and enjoy all eight of her grandchildren and to have a profound influence in their lives.