In Memory of Boris Eryk, By Raisa Eryk 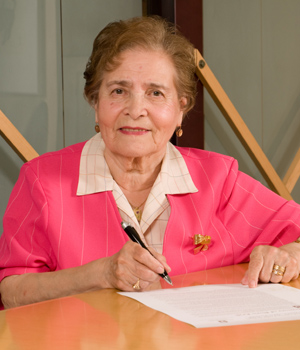 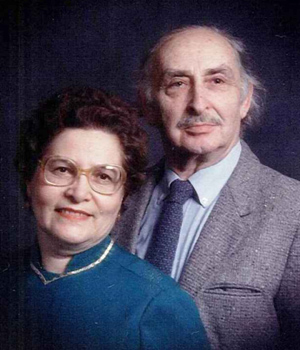 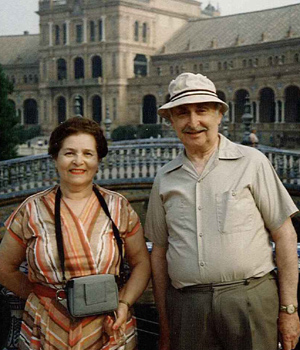 Raisa and Boris loved to travel, here at the City Hall in Seville 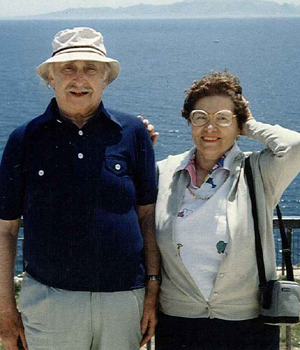 Raisa and Boris, travelling to Gibralter 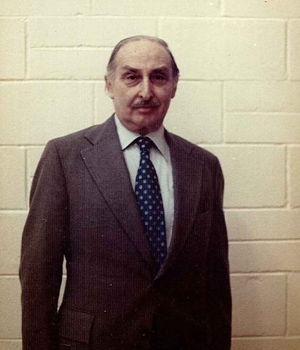 Boris Eryk was born in Poland in 1918, an only child. His parents had a grocery store and the family was well known in their neighbourhood. As a young man he attended the University of Warsaw and studied languages. When Germany invaded Poland and Jews were forced into ghettos, Boris returned home. His father and a number of friends were determined to escape the harshness of the ghetto. The Nazis somehow learned of their plans. Boris witnessed the execution of his dear father and friends. Many other friends and family members later lost their lives.

A Polish peasant family saved Boris's life. With their help, he and three young boys escaped from the ghetto and were hidden by this family in their underground cellar. The cellar was a pit underneath the kitchen floor where vegetables were stored during the winter. There was no water, electricity or lavatory. They spent three months in the cellar, coming out only at night for fresh air and physical needs. It became increasingly dangerous to hide these boys and the family had no choice but to ask them to leave. The boys went in different directions. Boris was fortunate to meet the Russian Red Army and, because he knew five languages, he was asked to join on as a translator. Boris later learned that the other three boys were killed by the Nazis.

After the war, Boris was offered Russian citizenship but declined because of prevailing anti-Semitism. Instead, he remembered a distant cousin who had immigrated to Canada. He contacted this cousin who sent him a letter of invitation. In 1950, Boris arrived in Canada.

For over 20 years, Boris worked as a bookkeeper, always saving money with the goal of pursuing his dream — to become a teacher. In the meantime, in 1961, he successfully completed a correspondence course in Credit and Financial Analysis from Business Education Division in New York. He also pursued his passions of reading, poetry, and music. In 1964 he earned a Certificate in Education from the University of Manitoba, and, finally, in 1966 he received his permanent teacher's certificate. He was 48 years old. He kept studying and in 1970 earned his Bachelor of Arts degree.

The next 23 years were devoted to a career as a Social Studies teacher at Sisler High School. He made the subject come alive, and gained the respect and affection of his colleagues, his students, and their parents.

In 1982 I, Raisa, his future wife, arrived in Canada. I came to Winnipeg from Moscow, Russia at the age of 56. In 1948 I graduated from the University of Moscow from the Judicial Faculty of Law. I became a lawyer and practiced corporate law for 32 years. My daughter Mila, her husband Simon and their daughter Anna had come here in 1979 to escape the crumbling Russian economy and to make a better life for themselves. Boris lived in the same building as my children and, shortly after I arrived, we met in the elevator. There was an immediate connection - it truly was love at first sight - and although I had come with only two dollars in my pocket, and spoke no English, Boris soon asked me to marry him. We were married three months later.

How can I describe life with Boris? He was abundantly kind, and had a generous spirit that could not help but give. He used to tease me, "First I gave you my heart, and then my credit card!" He was so intelligent and we were constantly discussing the issues of the day, especially politics. He loved to read books of all kinds, and was well known at the local library. He especially enjoyed poetry and really, he had the heart of a poet. He savored music and loved to play his violin. He was interested in everything and everyone, and people were drawn to him. He was polite and a gentleman. He loved fine apparel and was a great dresser. He always wanted the best for me and for my family, who became his family. He was the best travelling companion you could ever hope for and we travelled to many countries together. We loved movies, the symphony, conversation, and Chinese food! Our lives became one life and throughout his final years of illness, I took the bus to visit him in hospitals and other facilities every day. I wanted to. Boris passed away on April 30, 2008.

Boris supported many organizations and charitable causes throughout his life. He was a strong supporter of Israel, but also gave to many local charities. The Boris Eryk Memorial Fund at the Jewish Foundation of Manitoba has been established with a gift from his estate so that his legacy of generosity will continue.

I was privileged to love Boris Eryk. May his memory be for a blessing.